UZ Band Is quite the new up-and-coming group. They are a band that is focused not on one but the whole. UZ (a.k.a. us) Is inspiring because they are a team. This united front in the music world has a story and journey to tell you and I’m grateful to share it.

The interview took place at an outdoor patio at the Sagebrush Inn located in good ol’ Taos, New Mexico. The band had on their playing attitudes and were pumped and ready for a killer show. While sitting in the shade, even the birds chirped happily as the interview began. Most of the musicians in the band started their musical careers fairly young in life. The band consists of four members:

Joey Cordova, who picked up his first drum sticks at 5 years old. He has had many musical experiences throughout his life, becoming an exceptional drummer and singer.

Joseph “Jope” Madrid, who started out playing a piano yet matured into an impressive bass player and singer.

Mike Cordova, who had music running through his veins and grew up watching the world around him play, is the talented lead/rhythm guitar.

Marcello Vialpando, who started in high school mariachi and grew to become the phenomenal lead guitarist and singer. 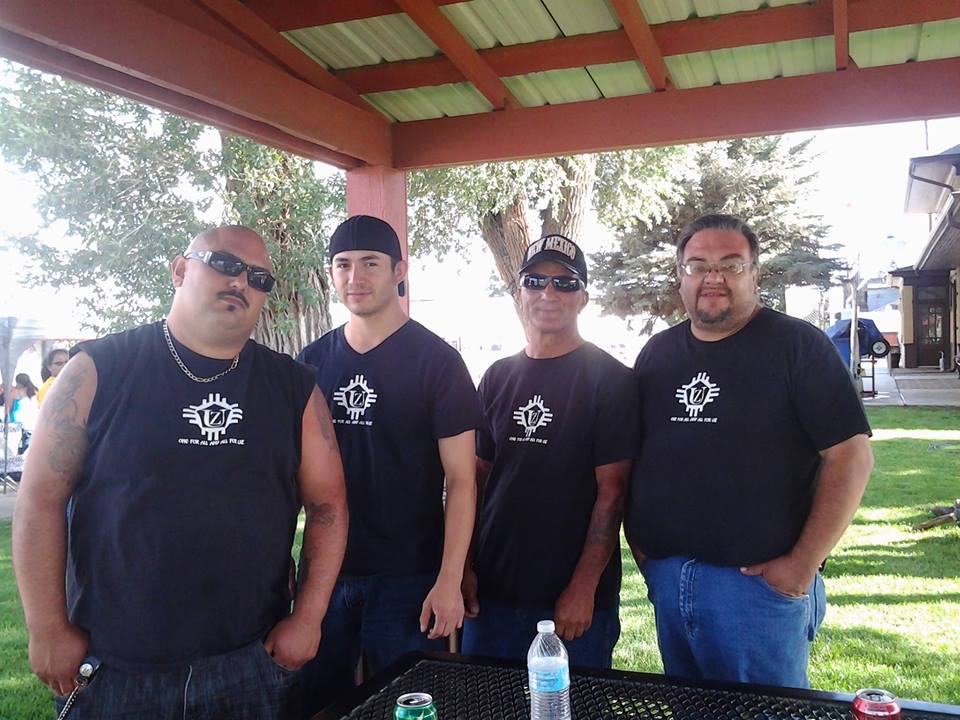 These guys started their band about 3 years ago, beginning with their first performance at the Zuni Lounge located inside the Kachina Lodge of Taos, NM (on Joey’s Birthday, March 10th.) I enjoyed speaking with them. The band was genuinely a happy group, and definitely an audience friendly group. I began the interview by asking a formal question, “Tell me a little about your band,” and received a well thought out answer:

Joey Cordova: We formed our band as a way to express many different genres: from cultural New Mexico ranchera, cumbia, traditional, to country, oldies, alternative rock, classic rock, spanish rock, some punk rock, reggae, and a little bit of everything in order to accommodate everyone who’s in our crowd.”

As I spent some time listening to their performance after the interview, this theory was put into action while the band played many songs directed towards the people listening. In the music world, there is always an underlying inspiration and generally it is our story of who hooked us, how we got started, and why we started it that carries on through the generations as fond memories. The performing life isn’t just about how often you play, or who you play for but to play your heart out and to the fullest. This thought led me to ask, “Who, How and Why did you get inspired?”

The guys talked about who inspired them, and I enjoyed hearing some of the statements Mr. Joseph Madrid expressed contentedly as he searched his mind for many well-known artists that gave him his creative edge:

“My family. There are far too many famous people in the world that inspire me. I appreciate and respect all music out there.”

To me, family seems to be the underlying meaning behind a successful musician. In most cases, music is in the blood. It’s around on a daily basis while you’re growing up. Typically it is a family relative or loved one who makes the connection for you and ignites your initial interest. For example;

“My dad got me into the music,” Joey said, smiling while reminiscing about his childhood.

For him, there was always a drum set put up and around. He started jamming on it, and by the time he was 12 he began playing in his dad’s band, Dickie Cordova Y La Pleve. His very first performance was at the Colorado State Fair during a parade. To me this might have been Mr. Joey Cordova’s First “Big Moment.”

“Mom said ‘I always had it in me.'” Marcello VialPando stated.

“My uncles and relatives were always playing around me,” Mike Cordova answered. “My best friend as a teenager, Rex Martinez currently playing with Mezcal and Primo Sol, got me to rehearse with a band he played in and it snowballed from there.”

With these comments, it goes to show that family and your close circle of relationships are important factors for a sprouting musician. Another important aspect of the music world is, as Marcello Vialpando mentioned:

“High school music programs, such as mariachi among others, were a big introduction to the world of music.”

Marcello tried flute and the drums in attempts to find a fit, but it wasn’t until he picked up his first guitar that it was instant magic.

UZ, like any other group has faced some minor challenges through their journey: Joey Cordova and Marcello Vialpando both said,

“We don’t have an album out, and that’s what we’re working on.”

“Getting people to hear us.”

“It’s hard to be a new band out there, because people have never heard of you, or don’t know who you are so they don’t give you that break and they don’t hire you.”

Despite these minor setbacks, the good news is that the reviews are in and UZ is growing and building their fan base rapidly. They have made quite a few accomplishments such as getting out to Colorado, getting people to support them, and learning a huge variety of music. Mr. Joseph Madrid said contemplatively,

“I believe our biggest accomplishment is still to come.”

Those are great and beautiful words because these guys have a fruitful career ahead of them. If you’re in the Taos, NM these guys are a must see. The biggest keys for making it or breaking it are included within these Inspiring Words from the band:

“If you’ve got it, and have the passion for the music, follow it. Don’t let nobody tell you you can’t.You’re always gonna have one or two critics out there that are gonna tell you otherwise, but you gotta take a few criticisms. Follow it, stay at it, and be strong, and it’ll pay off in the end.”

“You never want to give up. No matter how how many shows you go through, whether you only have five or six people, don’t get discouraged. Just keep going.”

“If it’s in your heart, you might as well use it.”

“I’ll Just say, everything you heard, that’s pretty much it. If you love it, go for it. Don’t ever let yourself down, or think less of yourself just because somebody else might think less of you. For every one person that doesn’t like it, there are there or four others out there that do. Keep trucking, keep rocking.”

Want to make it to UZ’s next performance? Head over to Taos Mesa Brewing on September 4th from 9:00pm to 1:00am Meanwhile, visit the band online @ https://www.facebook.com/uzband13