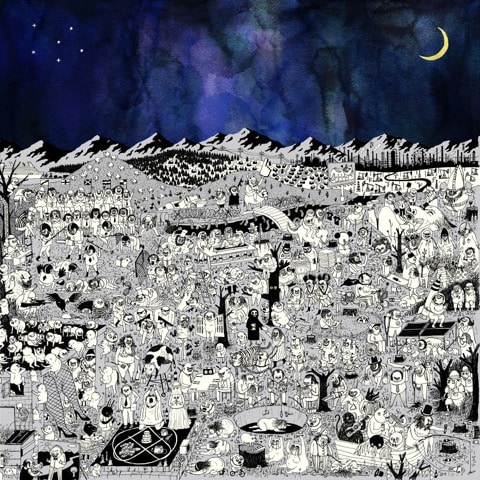 At the center of Joshua Tillman’s third album of songs as Father John Misty — a convincingly portrayed Southern California singer/songwriter — is a slow, earnest, revelatory 13 minute, 12 second monologue that lays bare all of the truths of the character.

If “Leaving LA” is a goodbye letter from Misty, the character, then Pure Comedy is Tillman tearing down his character’s facade of sarcasm, irony and inside jokes. What he unleashes in its place is equal parts titillating and despair-inducing.

The album burns with a heavy-handed dose of disdain for the institutions of mankind — organized religion, government, fashion, hipster-ism, consumerism, capitalism … name your ism — but the lyrics betray a deeper message about our need to find ways to relate to one another.

Take for instance the title track, which opens the album with the premise that our entire existence was destined to fail. The final stanza leaves us with this realization:

The only thing that seems to make them feel alive is the struggle to survive
But the only thing that they request is something to numb the pain with
Until there’s nothing human left
Just random matter suspended in the dark
I hate to say it, but each other’s all we got

Elsewhere, Tillman envisions the aftermath of upending the system on “Things It Would’ve Been Helpful To Know Before The Revolution.” The song is one of the album’s most compelling, lyrically describing a world that has been saved from the effects of climate change by reverting to more primitive means, all set to an ongoing orchestral rise and fall reminiscent of The Beatles’ “A Day in the Life.” Think of it as a much-less whimsical cousin of Talking Heads’ “Nothing But Flowers.”

“Two Wildly Different Perspectives” may be the best effort on this album, a devastating takedown of our polarized political spectrum that spreads the blame to those “on both sides.”

Other highlights on the album include “Total Entertainment Forever” — a much-needed romp that briefly conceals Tillman’s cultural criticism with some great sax lines; “Ballad of the Dying Man” — a gorgeous tune where the narrator muses what horrible fate might befall the community without his criticism to keep them in line; and “When the God of Love Returns There Will Be Hell To Pay” — in which the deity is reminded that his greatest creation has evolved into something nearly unrecognizable, for better or worse.

The album is gorgeous throughout, but other tracks, like “Smoochie,” “The Memo” and “So I’m Growing Old on Magic Mountain” fail to make as much of as a statement as some of the aforementioned songs. Which is a pretty high bar.

To go back to “Leaving LA” for just a moment, the song is blatantly and ridiculously meta. At the same time, it’s perhaps as straight forward as Tillman has ever been while staying in character. The song fairly accurately predicts its own reaction from some sectors:

I’m beginning to begin to see the end

Of how it all goes down between me and them

Plays as they all jump ship, “I used to like this guy

And like that, the whole album is always just an uncomfortable grimace away from collapsing underneath its own weight. If you have the space and time to sit down and really listen, it’s quite an adventurous album. The music is grandiose and it’s beautiful, dark and melodramatic. It’s sometimes unbearable, but often intriguing. The winks and nods are gone, the jokes are over and Joshua Tillman is going to tell us how he really feels about mankind. He hates you. He loves you. Let’s have a drink and talk about it. 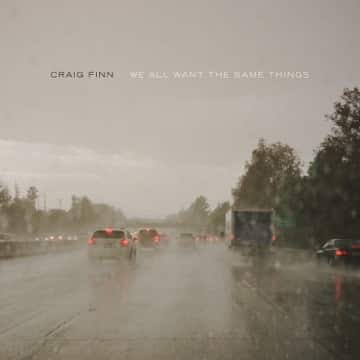 We All Want The Same Things

We All Want the Same Things, the third solo album from Hold Steady frontman Craig Finn is an album about the misadventures of characters young and not-so-young. A series of vignettes more than a concept album. Of course, Finn is no stranger to these types of characters, as they have populated his work since his work in the late ’90s Minneapolis band Lifter Puller.

However, the songwriting here offers some of Finn’s best work since the first four Hold Steady albums, and in the solo context allow for some of his most emotive work to date. While Father John Misty’s album examines mankind with a wide-angle lens and implores us all to seek deeper connections, Finn’s stories show us how beautiful and messy things can get when we actually make those connections.

Whether he’s lamenting an old friendship that revolved around bad habits (“Jester & June”), two friends/lovers celebrating whatever there is to celebrate (“Birds Trapped in the Airport”), the things we do for friends knowing it may not be in their best interest (“Ninety Bucks”) or a heartbreaking tale of grief, loss, drugs and escape (“God in Chicago”), this album is all about the complicated, confusing, liberating and sorrowful relationships people have with one another.

Finn’s speak-sing vocals are still a great means of delivery for his blue-collar stories, and never has it been more effective than on “God in Chicago,” the most devastatingly human song of his career.

Musically, album opener “Jester & June” sounds like it could’ve easily been a B-side from “Separation Sunday” but things quickly go in a different direction on the album’s second song, “Preludes,” which is also one of the album’s best. Driven by a catchy synth line and drums and sax, it’s an E-Street Band meets The Human League tale with lyrical allusions to some of Finn’s other favorite subjects: Catholicism, loner-ism and criminal activity.

These songs make it clear that Finn has negotiated how to differentiate his signature voice and songwriting style as a solo artist into something distinguishable from his work with The Hold Steady. The electrical flourishes throughout the album add more depth to Finn’s stories, as do some tasteful and interesting background vocals.

Other album high spots, of which there are many, include “Rescue Blues” and “Tangletown,” two more stories that highlight unusual or unexpected pairings of souls. We All Want The Same Things winds down with the horn-infused “Be Honest,” which is musically reminiscent of another aging storyteller, John Darnielle, and his most recent work with The Mountain Goats.

As Hold Steady fans age, and leave the rock and roll lifestyle behind, it’s good to know that Finn has got our backs, providing the rest of the story for his good-time characters who are now coming to realize that one day the party must end. Finn’s stories, his authenticity and his songwriting aren’t ending anytime soon, and are all the better for the transformation that comes with age.

A Crow Looked At Me, by Mount Eerie (P.W. Elverum & Sun) — Phil Elverum documents the loss of his wife with a beautiful, honest set of songs.