My favorite track by Tina and Her Pony is their mournful love song Ana Bai. The last time I heard them play it live was in someone’s living room in Taos, where Tina and Quetzal performed at their own going-away house party, along with Kirry Nelson, another graceful chanteuse in our town. They were headed out of Taos to tour “all over” and eventually they landed in Asheville, North Carolina.

Tina Collins hails from Ohio originally and Quetzal Jordan from Florida, but between 2009-2011 they sequestered in Taos, writing and performing music while working at coffee shops, and for many locals they became our musical darlings.

Five years later, and with a release of new music under their belts, Tina and Her Pony are making their first return to Taos with an evening of their much cherished Indie Appalachian Folk. The show on November 20th is presented by Goddess Fest Productions at Unity of Taos.

Jenny Bird, another one of Taos’ beloved singer-song writers is Tina’s aunt, and the reason Tina first came to Taos in 2009 — that is, so that the two could work on music and to record. Jenny is the musical director of Unity of Taos, what she defines as a “A Community of Love,” in the building that was once Chamisa Mesa School on Blueberry Hill where she was a teacher for several years. 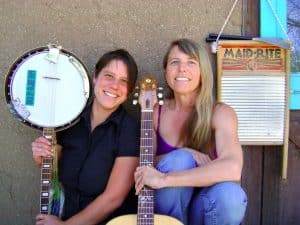 Jenny created Goddess Fest Productions in 2014 to bring female musicians forward and give them the attention they’re not receiving in what is still a heavily male-dominated industry. The number of women artists Jenny Bird has brought to Unity of Taos has doubled since she started scheduling musicians — artists like the duo Ma Muse who performed on Election Day, November 8, “with their roots in the folk and gospel traditions and their hearts rooted in the present moment,” whose name means “Ma” as in Mamma, and “Muse” as in “the one who inspires”; and Gina Breedlove, who “calls her music Folksoul, a coalescence of Rhythm & Blues, with story telling cadences of Folk, Soul, and the gospel truth.”

Taos poet, songwriter, and social activist, Lyla June Johnston took the stage at Unity in June. Johnston is currently presenting at events in New York City for the Standing Rock Sioux Reservation against the Dakota Access Pipe Line, she has also brought her energy to North Dakota, with protests in prayer for the protection of the women of Standing Rock, the Water Protectors, and The Missouri River.

Johnston says, “Jenny Bird has taken the platform she has built for herself and instead of squandering, has leveraged it to uplift other women. In the spirit of a true leader, she has used her position to grow the leadership qualities of other women. This is very important from a Native American perspective because, as the old proverb goes, ‘a nation is not defeated until the hearts of its women are on the ground.’ So we are restoring our community by lifting the hearts of the women up off the ground and honoring them in this way.”

It is all the more synchronous that Goddess Fest Productions has established a musical platform for the voices of the feminine and grassroots connection, in light of our country’s threshold of changes, and as we hold onto our humanity. And it becomes even more hopeful when we hear the sweet harmonies of two beautiful young women in our midst.

Tina and her Pony return to taos on Sunday November 20th.

The show starts at 5p, doors at 4p. Unity of Taos is located on 69 Blueberry Hill Rd. Taos. Don’t miss the REturn of Taos’ Own Indie Appalachian Folk Duo.