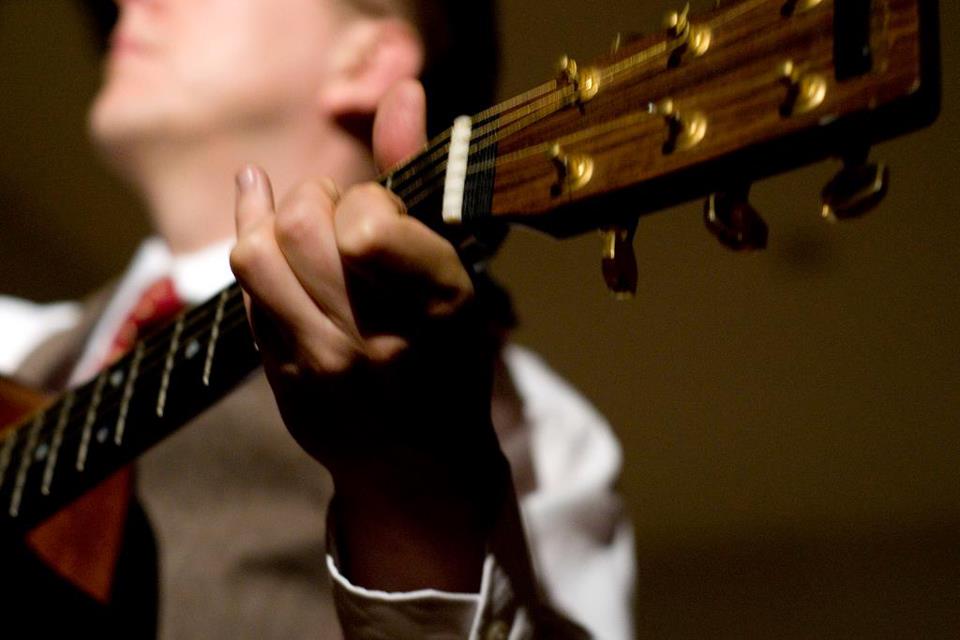 Last spring I had the pleasure of recording Chris Schoen’s new collection of Baudelaire translations at my studio, the Barn, in Questa, NM; we were working on what would become Chris’ new record, Heaven, Hell, or Wherever: 14 original translations of Baudelaire’s poems turned into songs. These song-translations, however,  are part of a larger project, translating & setting to music all 128 poems from Baudelaire’s Les Fleurs du mal  & then singing them along with hand-cranked drawings (‘crankies’ or Cantastoria). Chris will get some help on this as there are 6 or 7 other composers working on translating the complete text. There is no need to be a Baudelaire fan to love this recording; I knew next to nothing about the influential French poet & coiner of the term ‘modernity,’ nor did I have much interest in him. I am a big fan of Chris’ work though, & so I was game for what this collaboration might bear.

Charles Baudelaire, fined, but NOT imprisoned for what he called his ‘cold & sinister’ poem, from its punk-rock title (english trans: The Flowers of Evil, take note YOLO generation!) to the shocked audience of his day: “Everything in it which is not hideous is incomprehensible, everything one understands is putrid” is considered one of the major innovators in French literature. When I heard that Chris was working on this, I encouraged him to come out to the Barn & record.  Chris is a great songwriter, having previously released two CDs: This Vegetable Universe, & Heraclitus (which I also recorded) & his beautiful voice sets an eerie & mysterious mood to every story it tells. My microphones love him as well & were excited, in much the same way my surfboard would be excited (if I had a surfboard) & it heard that Izzy Paskowitz was going to take it out to Rincon for the day. We spent two weeks up at the Barn recording, joined by Heather Trost (A Hawk & A Hacksaw) on violin,  Anne Speroni (Art of Flying) on bass & piano, & Sesshu Morgan Pappert (Czechk Megaphone) on clarinet & trombone. The songs we recorded are sparse; some tango-like, while others are folky & familiar. Check out “The Giantess.” 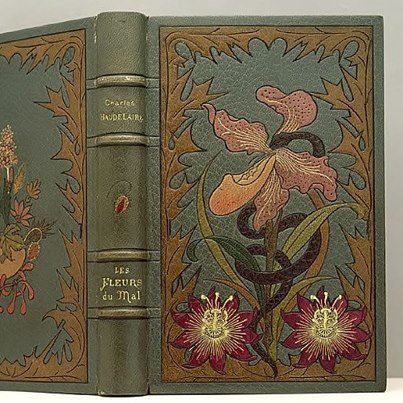 Chris & I conducted this interview in a series of recent e-mails.

Heaven, Hell, or Wherever is available at BANDCAMP.

Throat Culture: What is Baudelaire in a Box?

Chris Schoen: Baudelaire in a Box is a long-term project staging all 128 poems from Les Fleurs du mal as cantastorias. Cantastoria is an old street performance form dating back to 6th century India. Think of “Mack The Knife” — if you’ve seen a film or stage version of Three Penny Opera, you might  have seen the singer of “Mack The Knife” pointing to painted banners with a stick while he sings. That’s a cantastoria. For Baudelaire in A Box we’re mostly using “crankies,” which are hand-cranked painted scrolls. Pre-cinematic moving pictures.

The crankies are built and painted by Dave Buchen, whose crazy idea this all was. I’m one of the songwriters. I’ve written about 25 songs from Baudelaire poems to date. The plan is to have all the songs and crankies written by 2017, when we’ll have a big marathon performance of them all. 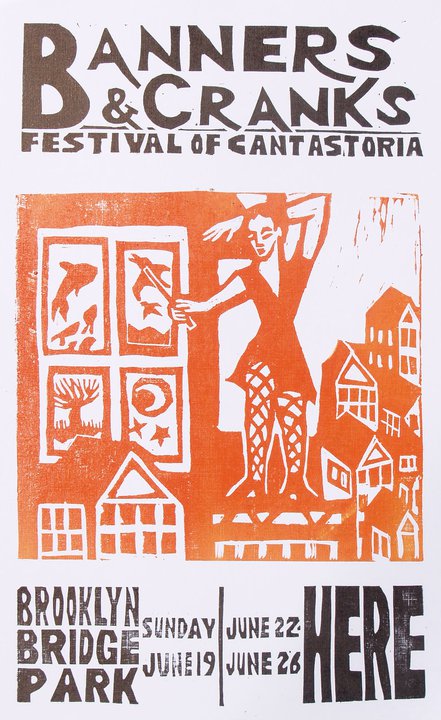 TC: Why Baudelaire? You said it was Dave Buchen’s (Theater Oobleck) idea,  is that all there is to the story?

CS: Things happen. Dave Buchen and I did a cantastoria of Baudelaire’s “A Carcass” back in 2002, with him reciting the poem (as he cranked), and me playing some incidental music I can no longer recall. In 2009, Dave started curating some performances at a winery in Puerto Rico. Les Fleur du mal has a “Wine” section, which seemed fitting, so he got a musician friend to write songs to them. When he brought the cantastorias to Chicago in 2010, I wrote and sang my own versions. It was somewhere around here that Dave was possessed by the idea to do the entire Fleurs du mal.

TC: Is there anything about Baudelaire poems that make them particularly adaptable to songs??

CS: Yes and no. Baudelaire wrote a lot of sonnets–just the right length for songs. (Sonnetto is Italian for “little song”). But sonnets provide a challenge for standard pop song structure, because about two thirds of the way through they switch from quatrains (four line stanzas, very common in songwriting) to tercets (three line stanzas). This transition can sound kind of bombastic in song form. I’ve had varying success in managing that tendency. With The Giantess, I found a chord sequence that manages, I think,  to resolve itself without excessive hysteria. Sometimes I just give the bombast free rein, like in The Death of the Lovers or The Sick Muse, because it seems to fit the material, but if you do it too unsparingly it gets old fast.

There is a lot of great imagery in Baudelaire, which is great for song. He really chews up the scenery. But he also relies a lot on classical references, which can be tough. There’s a lot you have to chuck out.

TC: Do you think about how they will appear as ‘crankies?’

CS: Not nearly as much as Dave does. We work pretty independently, so it’s always interesting to see how things match up when we rehearse a new song for the first time. 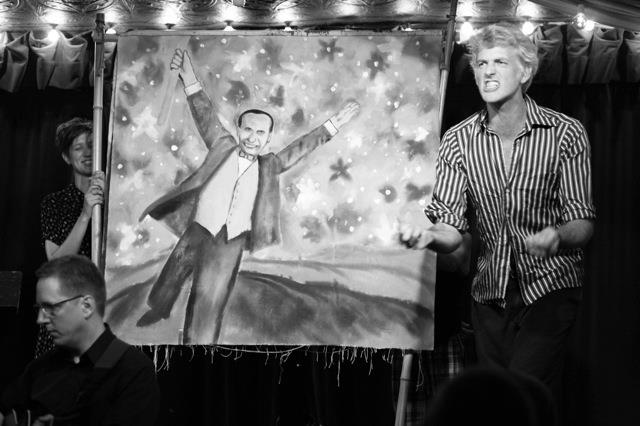 Chris Schoen & Dave Buchen performing one of the cantastorias.

TC: Do you speak french?

CS: Not so much. I studied it in Junior High, but was never fluent. I rely heavily on French-English dictionaries when translating, as well as existing translations for context.

TC: Is anyone else working on Baudelaire translations into songs? as part of your group? that you know of?

CS: For Baudelaire In a Box, there have been at least 6 or 7 other composers so far besides myself, each doing roughly 5-10 poems. Outside of this project, I’m not aware of any other Baudelaire songs in English, though there are numerous French versions dating back to the 19th century. The settings by Debussy and Duparc are probably the most famous. Diamanda Galas did a version of “Litanies of Satan” in the 80s, but she sang it  in the original French.

TC: You came out to the Barn Recorder in Questa, NM & worked with analog tape — then you returned to Chicago, I assume you worked with digital recording there. Any observations?

CS: Two totally different experiences. Nothing can touch the sound of tape. But the versatility of a Pro Tools setup on laptop is nothing to sneeze at. We were able to record the different sections of “The Voyage” in a number of different locations, with very little setup. Being able to do alternate takes without worrying about how much tape is left is nice for a performer of my less than virtuosic skill level. I had a great engineer (and good mics) which helps.

Chris Schoen will be performing at this year’s inaugural LIVE TAOS FEST, August 2-4.

Look for Chris on the Art of Flying Curated Day #2, Saturday August 3rd.

Baudelaire in a Box has a web-page. Find out what’s new HERE! 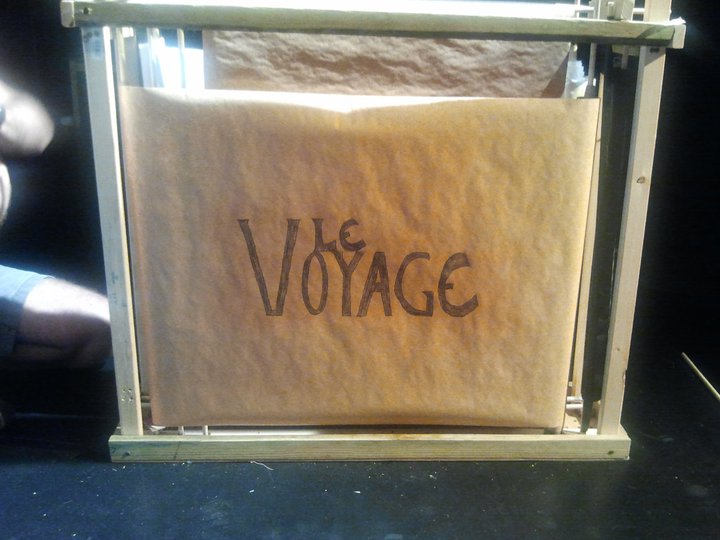 Assembling the new ‘crankie’ for the first time! 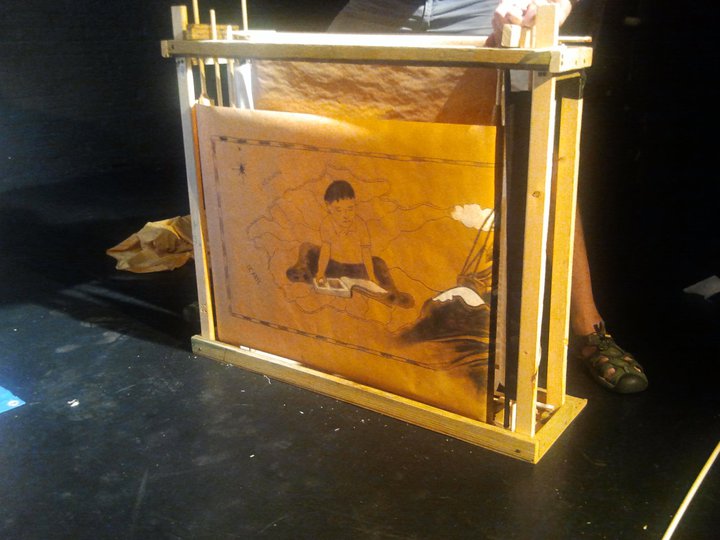 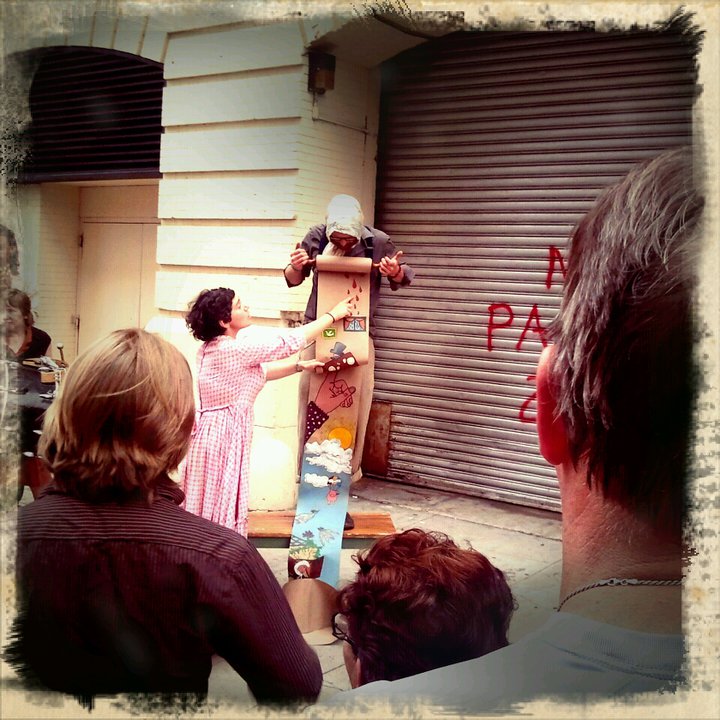