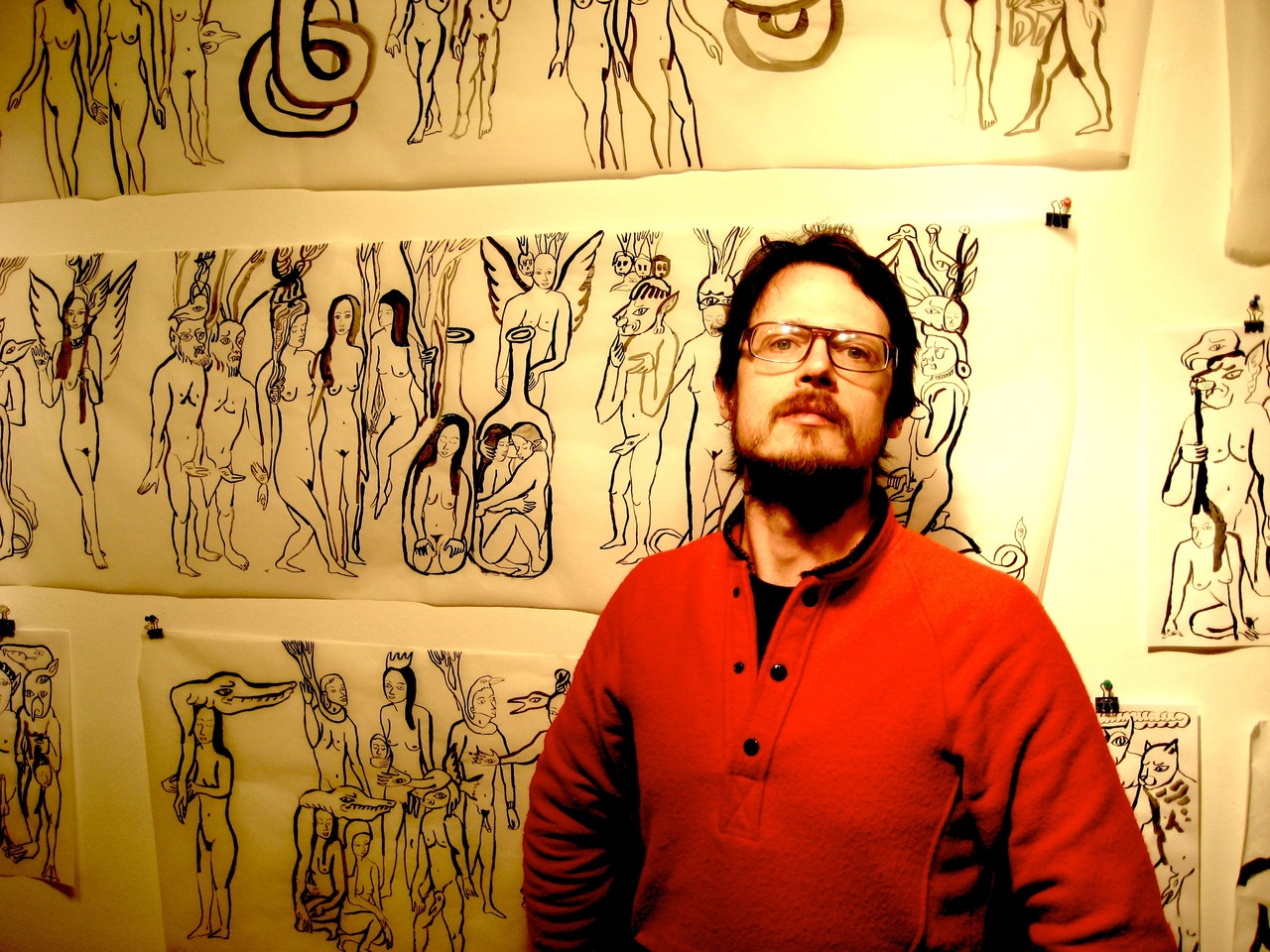 “You know how in the 1950s the press and parents and such talked about how rock’n’roll had some evil, sexual, tribal force that was going to possess the youth? Arrington de Dionyso’s Malaikat dan Singa is really that. Trance-punk dancehall explosion gonna knock you up! 2011!” (– K Records) 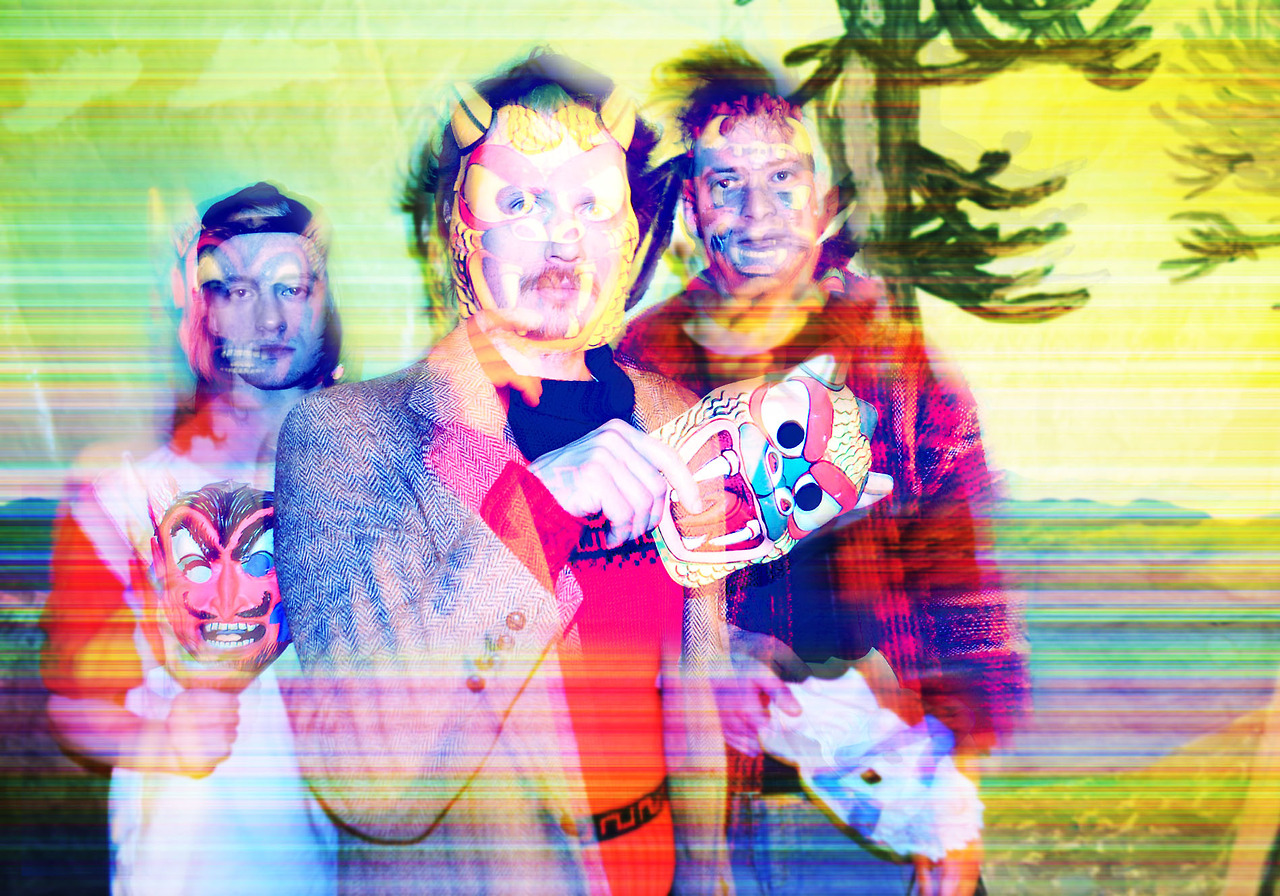 Arrington de Dionyso: My band ‘Old Time Relijun’ (Olympia WA) was active for about 13 years. We started in 1995 & when the band kind of…(2008) …we never really ‘broke up,’ we just kind of…we were all living in different cities, it was really obvious we weren’t going to make any effort to get together & do a big tour the way we had been doing it before…

I had a year or so where I wasn’t doing any kind of band commitments, I wasn’t doing any rock music with anybody else. I was doing a lot of solo performing, doing a lot of listening, & the idea for Malaikat dan Singa came from a really wild combination of ideas. I wanted to envision a ‘pop’ music for 500 years in the future. This utopian rock music that wouldn’t really be ‘rock & roll’ the way people play it nowadays, it would be more like dance-hall — but, really electric & electrifying dance-hall. It might not use the same Western scales & harmonies & melodies that most people are familiar with in the conventional ‘pop’ music of today. It would be a little bit more adventurous than that. The world being what it is, it probably wouldn’t be in English either, because most people in the world don’t come from America or England, they come from all over the place. I picked Indonesia, because it has a really easy language to learn for one, but I also deeply love Indonesian music. 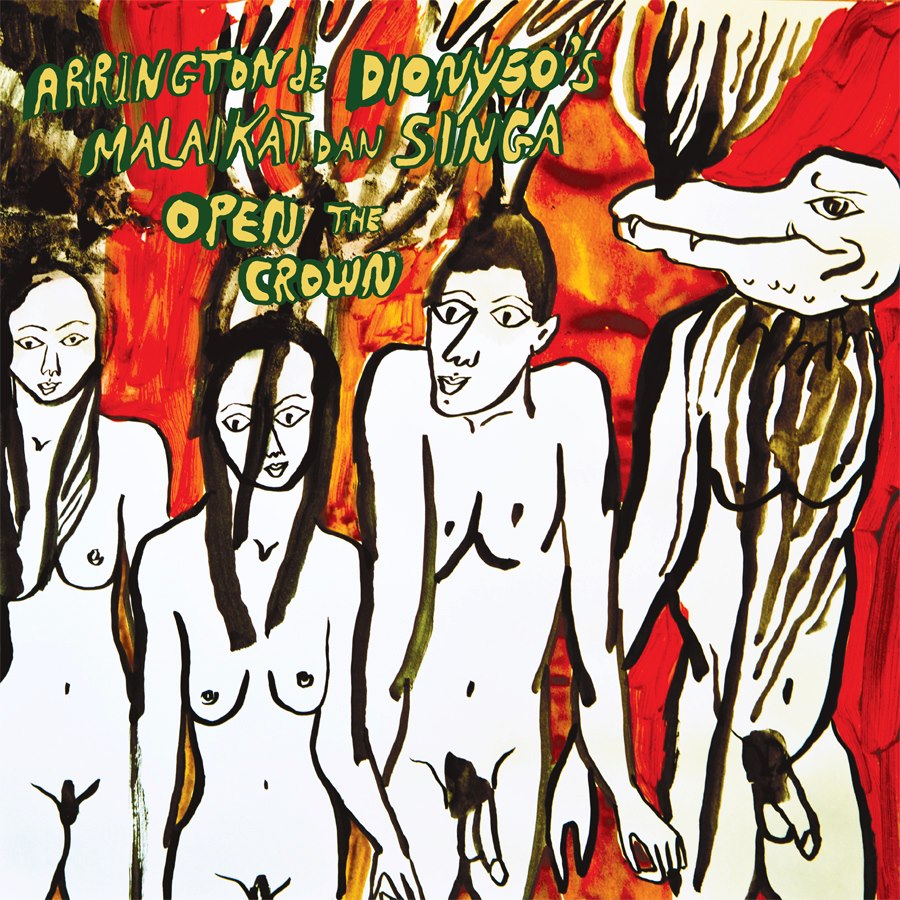 TC: Had you spent much time in Indonesia?

AdD: This is the story…I had not been there at the time (in 2009) — I was dating a young woman who had grown up in California, but she had lived in Indonesia for a few years when she was younger & she spoke fluent Indonesian & was very familiar with the culture there.  & I was working on this recording project for the first Malaikat dan Singa recording, & I decided to write all of the lyrics in Indonesian. I spent 6 months teaching myself Indonesian. I learned the grammar & the vocabulary & everything I needed to write songs with & I put together this entire first album as a surprise…to impress this young woman that I was very interested in. 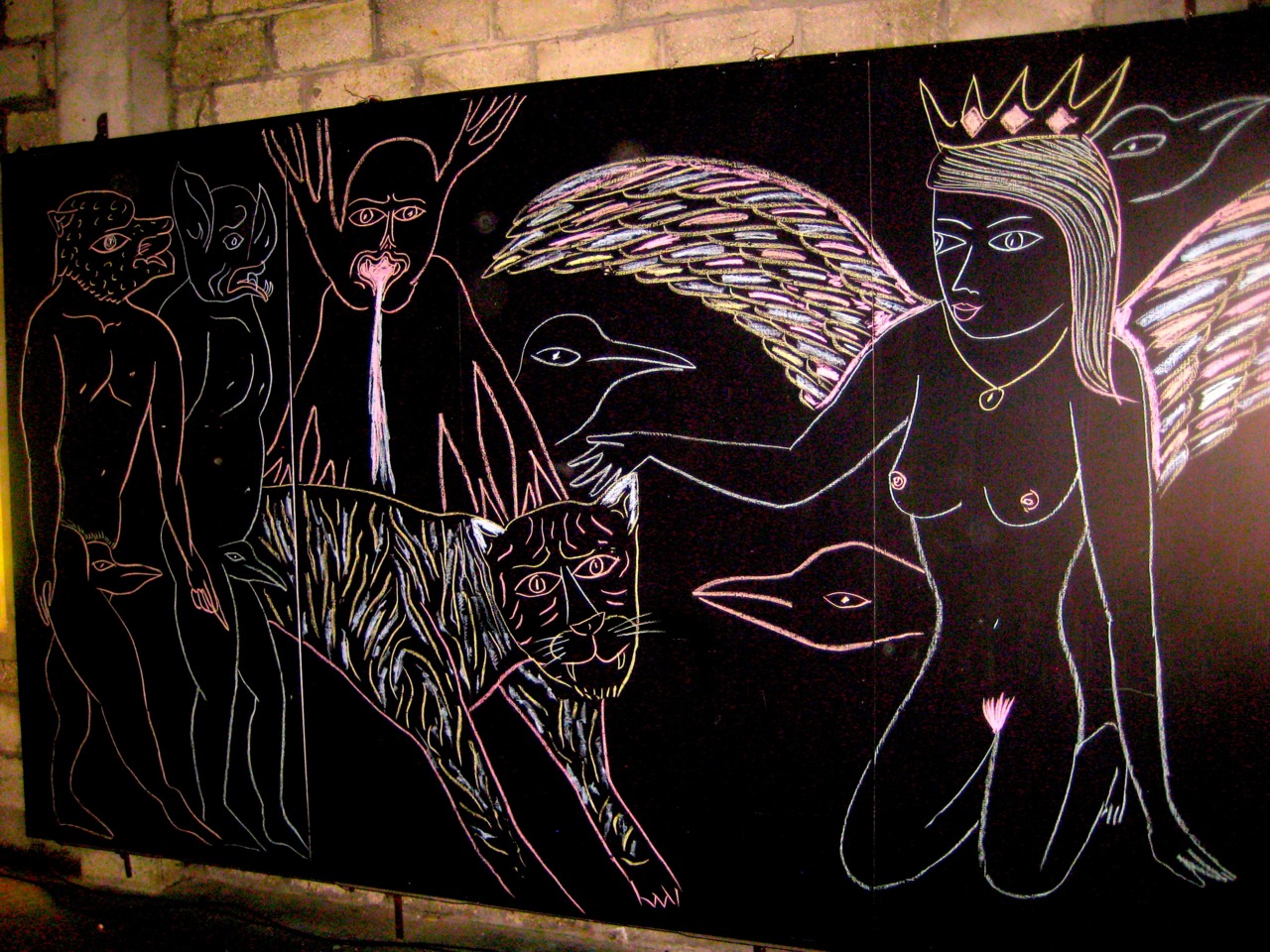 AdD: It was quite a surprise, I tell you! A lot of the lyrical content in the Indonesian songs is drawing from William Blake, ancient texts of Jewish mysticism, & Sufi mysticism…all of these transcendental, alchemical source materials that I find very interesting. I am getting into the language for the sound of the language, because I am able to say things that wouldn’t sound the same way if it were said in English, or French or Spanish or Italian…I have studied a lot of different languages…I am really attuned to the sounds of the words – -& the sounds are just as important as the meaning of the words, & that’s truly how I write poetry. Even in English, it’s the sound of the word that you have to consider first, before you consider the meaning. If you are just thinking of what the words mean you might as well be writing speeches for politicians or write stories or be a journalist, but if you are concerned about the sounds of words than you become a poet or in this case, a songwriter.

TC: The original languages were very connected to sound. Sanskrit, for example.

AdD: Sanskrit is a very good example & it’s interesting, because Indonesian borrows a lot of vocabulary from Sanskrit…Sanskrit is one of the very ancient languages for scholarly & sacred research. Many people believe that there are vibratory emanations that exist within the sounds of the syllables themselves… & when you listen to some of the very ancient mantras & Sanskrit poetry, you don’t know what the words mean, but you can feel the effect of the mantra breaking its way through pathways in your energetic system. 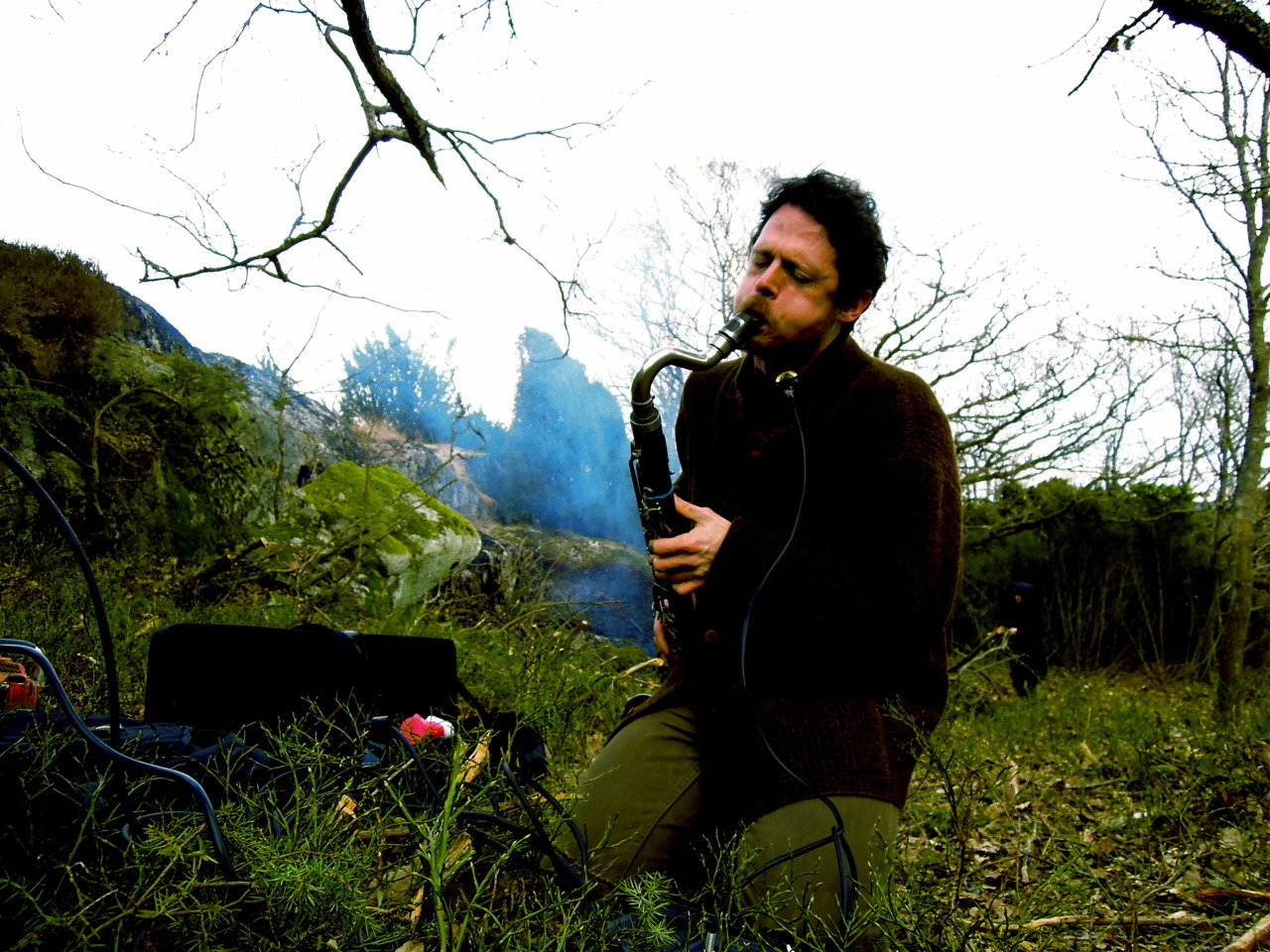 AdD: There’s actually three records & this is the next part of the story. After we had finished the second album, the first one came out in 2009…

TC: The one for your girlfriend. Singing in Indonesian, that must have been quite a surprise to a lot of people. 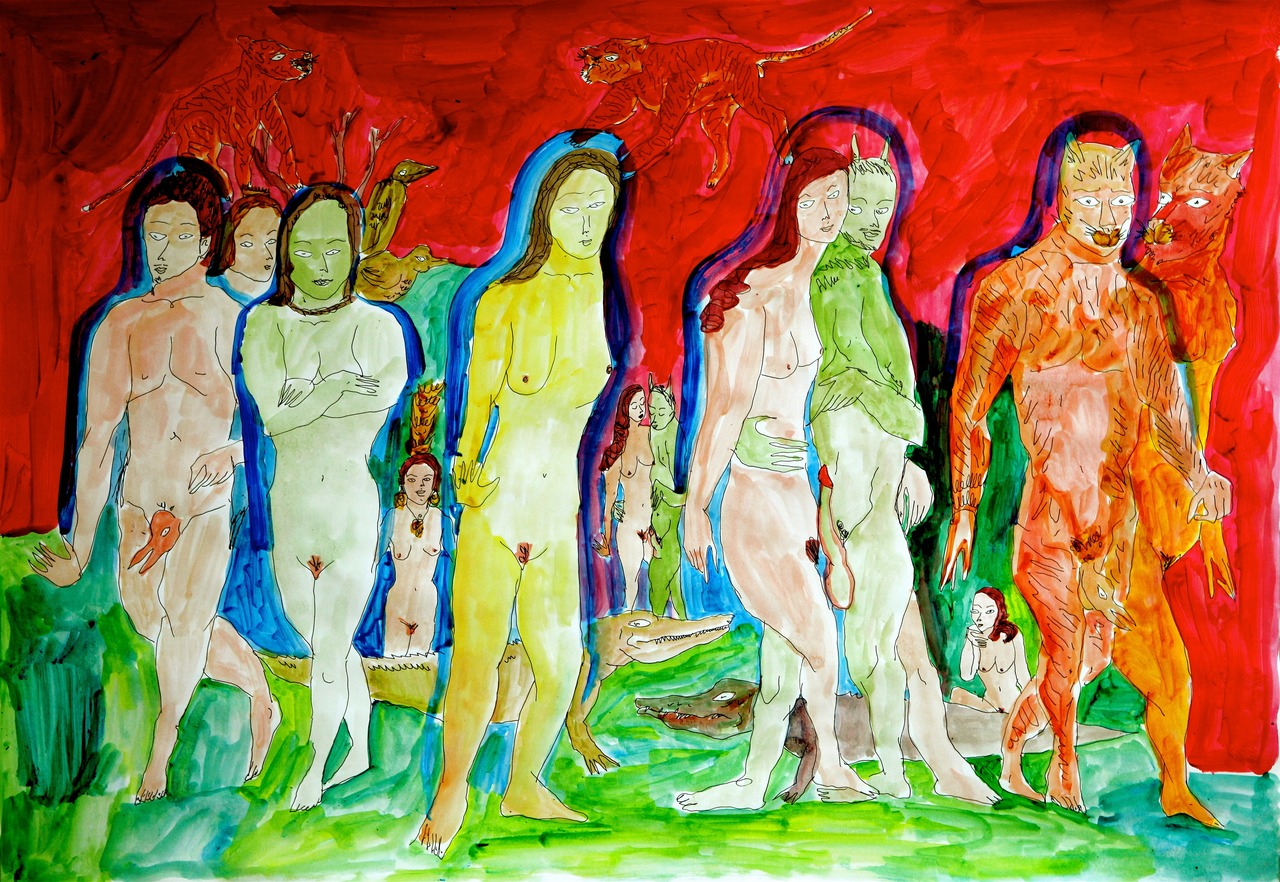 AdD: People were just like: “Arrington, what the fuck are you doing?” So, after the second album came out, we had some videos on YouTube & because the name of the band “Malaikat dan Singa” is an Indonesian word meaning “Angels & Lions” we were getting more people in Indonesia watching our videos than anybody in America or Europe. I was starting to get comments on my YouTube page & people were e-mailing me asking, “Hey, are you going to come & play in Indonesia?” Of course I wanted to, I had never been to that part of the world before..eventually I got enough contacts for people who were interested in organizing concerts & they put me in touch with a few musicians: I needed a drummer, I needed a bass player,  I didn’t want to just do concerts of my own music, I wanted to play in more collaborative settings with traditional musicians who were open-minded about experimental music, cross-cultural or even trans-cultural collaboration. 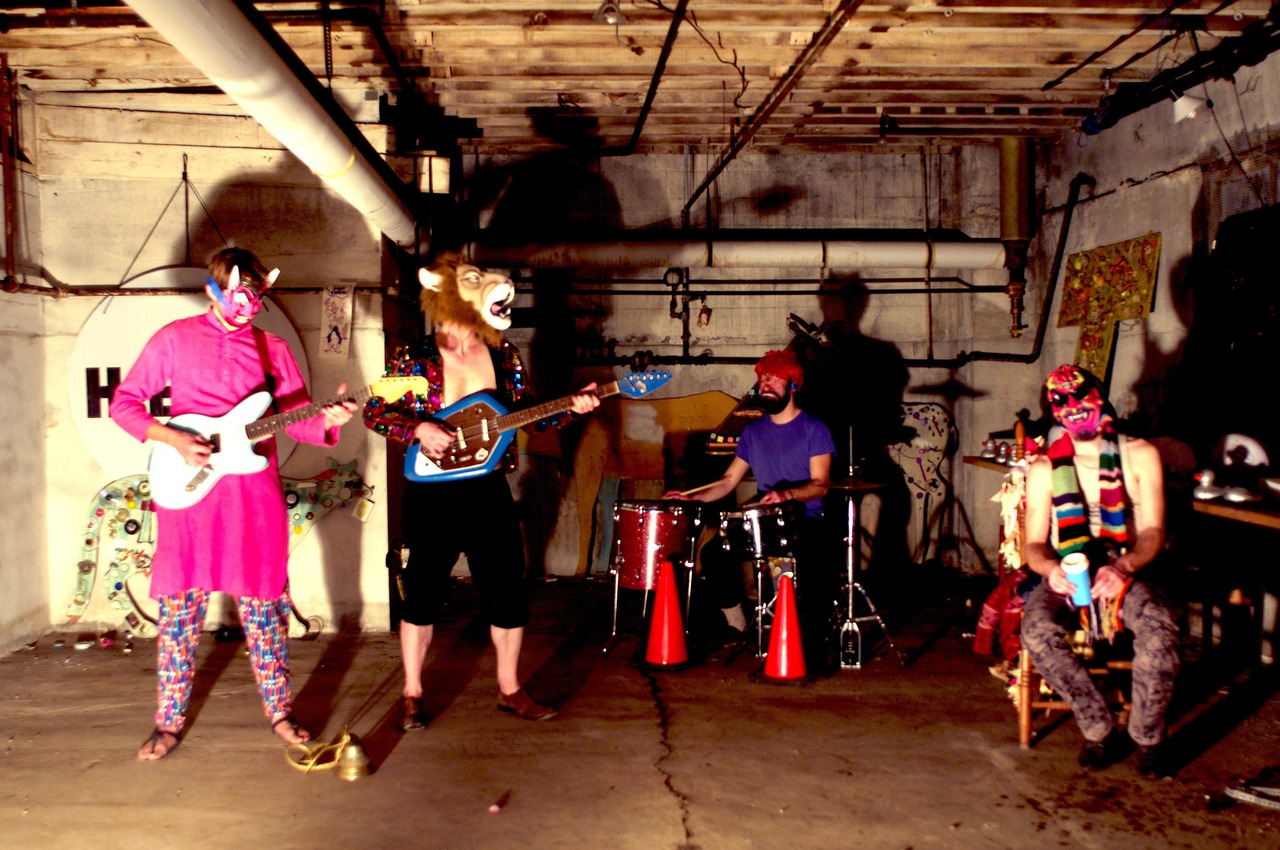 TC: Is improvisation part of the musical culture in Indonesia?

AdD: It’s a really big part of…not just the music, but in the way that the musicians & the masked dancers & all of these things create a very vibrant  social fabric formed between the music, the mask, & the dance, & costumes, & that relationship can be very improvisatory in many, many  ways. Every person is interacting with every other person in these social rituals in the older villages.

TC: How long were you there?

TC: Did you bring your band?

AdD: Oh, no…I formed a new band there to learn all of my songs. & the crazy thing about that is that when you play concerts in Indonesia, it’s mostly younger people that are interested in that kind of thing, you know, the rock & roll world. & I would honestly tell you, that most of the kids I talked to, that were coming to the concerts…they know more about bands like Nirvana & hip-hop & that kind of thing than they do about ancient, traditional Indonesian music. To them, that’s what their grandpa listens to; that’s something their grandma used to sing when they were kids. It’s not that they are disrespectful of that background, necessarily, but it’s like talking to an American & you ask: “when was the last time you went to a square-dance?”  Just because that music comes from where you’re from it doesn’t  mean that you have any kind of inherent relationship with it, necessarily, but because these kids are so into Nirvana, punk rock, heavy metal…because they’re so attuned to those examples of extreme American music, when they hear somebody coming all of the way from America, but singing in their language & using scales that they recognize & the rhythmic patterns that they recognize from their more ancient music sources, it really blows their minds. Especially with the younger kids, I had people come out & come up to me after concerts & say: “WOW! You’ve really inspired me to actually listen to Indonesian music now, because it’s amazing to see someone coming all of the way from America who wants to hear our music & play with traditional musicians, because most of the people my age, we don’t even listen to this stuff at all.”

(Malaikat dan Singa: I create in the Broken System.”)

TC: What’s the line-up of the band?

AdD: It’s a very fluid band. I have musicians that I work with … you know, they have jobs & they have kids & so when I am doing a two-month long tour across America, they’re not going to get up leave all of the stuff that they are doing to do a big tour. So, when I do a longer tour I usually just bring a couple people with me. 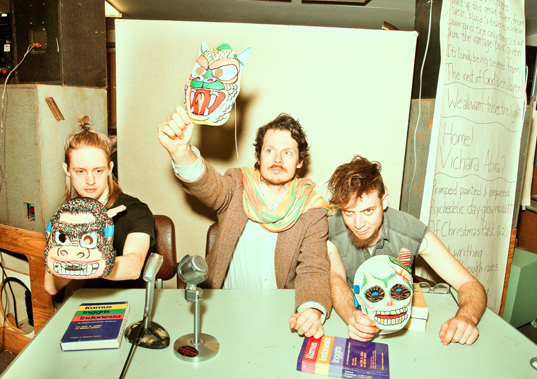 AdD: With “Open the Crown,” the new album, it’s the first time I’ve actually sung in English in over 6 years. There’s a couple of Indonesian songs on the album, but it’s mostly in English now.

AdD: That means ‘Lightning.’ It’s a song about being struck by lightning. The lightning of the god of fire.

TC: Based on some Indonesian source?

The show is Sunday, April 21 at the Taos Mesa Brewing Co.

Art of Flying LOUDband & Thollem Electric will also be playing.