Two decades is a long time to commit yourself to doing something — anything — much less something that doesn’t necessarily pay the bills. But that’s what Roots + Wires John Henderson and Jerry Schwartz have been doing with Roots + Wires Reggae Sound System, a radio show that has been bringing music from all over the world to Taos, for 20 years.

To put things in perspective, in 1997 Bill Clinton was sworn in for his second term as president, Tara Lipinski became the youngest world-champion figure skater, Timothy McVeigh was convicted for his role in the bombing of the Murrow Federal Building in Oklahoma City and 39 members of the Heaven’s Gate cult committed mass suicide in San Diego, with hopes of catching an extraterrestrial spaceship following the Hale-Bopp Comet, which was visible with the naked eye early that same year.

In 1999, the radio show spawned Roots + Wires Presents, a concert promotion business that has been able to bring many of the amazing world music artists and blues musicians to Taos over the years.

“When we started, there wasn’t really anything happening with touring artists coming to Taos, other than the annual Solar Fest,” Henderson says. “Our vision has always been about creating a music scene in Taos — like there is in places like Aspen or Telluride. After 20 years, Taos certainly has a scene now and I think it is something that really brings people together and makes our community stronger.” 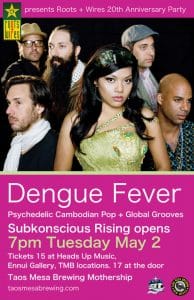 To celebrate their anniversary, Roots + Wires Presents is hosting L.A.-based Cambodian and American rock band Dengue Fever, at Taos Mesa Brewing’s Mothership on May 2. The veteran band features lead singer Chhom Nimol, who sings in Khmer and English. Musically, the band, which was started by brothers Ethan and Zac Holtzman, performs a blend of Cambodian pop, psychedelia and surf rock; basically a group of sounds that was very popular in Cambodia’s thriving 1960’s music scene before the brutal rule of the Khmer Rouge.

“We’ve tried to get them here for a long time,” Henderson says. “They’ve been on the road opening for Tinariwen, and this will be their only show in New Mexico. “We’re looking forward to supporting this band. They’ve kept this style of music alive and we certainly like the originals and the roots of the music, but we also like when younger artists start taking the music in new directions.”

The Roots + Wires Reggae Sound System has had a solid home base for nearly three years, since Henderson and Schwartz joined forces with other other members of the community to help start KNCE, 93.5 FM. Roots + Wires Presents also now promotes all of its shows at Taos Mesa Brewing.

“The early years were fun and I am still amazed that we were able to bring artists to Taos when there was not really a venue,” says Henderson. “We have always been about presenting artists we like and making shows be more like a party.”

The party continues on May 2 at TMB. Visit Taos Mesa Brewing’s website for tickets and information, and connect with Roots + Wires Presents on Facebook to find news and information about other upcoming shows, including the annual summers shows in Arroyo Seco put on by the promoters’ nonprofit arm, Seco Live.