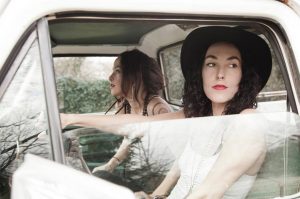 This Thursday, May 19th at Taos Mesa Brewing, Roots and Wires Presents brings Rising Appalachia back to Taos.

Rising Appalachia, led by the powerhouse sister duo Leah and Chloe Smith, draws its roots deep from the folk tradition with an emphasis on social justice. Joined by percussionist Biko Casini and bassist/guitarist David Brown, the group uses their knowledge of a variety of instruments (fiddles, banjos, drums, kamibas, congas, didjeridoo, tabla, spoons, and washboard just to name a few) and resonant vocal harmony to create a tapestry of sound, weaving styles of soul, blues, jazz, world, gospel and more.

In 2015 the group started the “Slow Music Movement” and is committed to making their touring schedule as sustainable as possible. According to their website, the group brings in local outreach to each event, reduces single-use waste at their shows, sources farm-to-table food for backstage, and continues to create and promote sustainable touring practices across the board. “It’s our effort to take the glitz and glam out of the music industry and bring performance back to its roots — that of public service. A service where musicians are not just part of fast-paced entertainment world, but instead influence the cultural shift as troubadours, activists, story tellers, and catalysts of justice,” explains Leah. 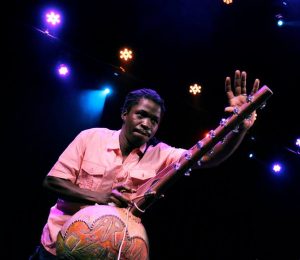 Joining Rising Appalachia on their 2016 “Fertile Grounds” Tour is Arouna Diarra. Diarra is from Burkina Faso in West Africa. He plays a variety of traditional instruments including the kora, ngoni, balafon, talking drum, and djembe. Thanks to Jerry from Roots and Wires for giving me a crash course on what some of these instruments actually are! “The Kora is the world’s largest stringed instrument and has a totally unique sound that some describe as a harp. The ngoni sounds a bit twangy, like a banjo or fiddle, and is oddly connected to American bluegrass or certain folk music in many ways. Arouna Diarra is the perfect complement to Rising Appalachia’s sound and also features their percussionist Biko Cassini,” says Jerry.

Thursday night at Taos Mesa Brewing is shaping up to be a classic Roots and Wires evening with sounds that will leave you wanting more. The show starts at 7:00 p.m. and tickets are $17. Here’s a clip of Rising Appalachia in KNCE’s own Silver Twinkie! Just a taste of what this amazing band can do.