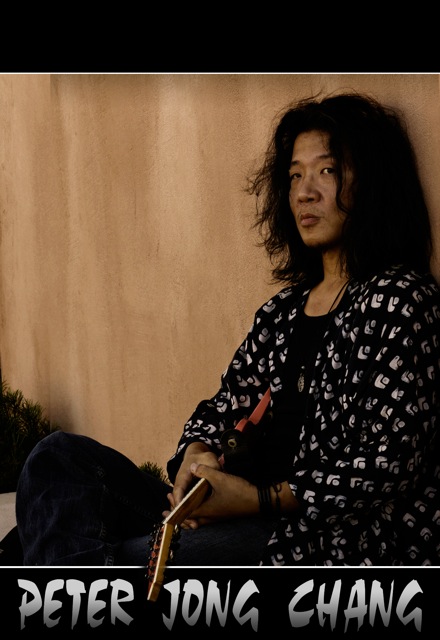 Peter Jong Chang’s show started at the Kyote Club during the octogenarian dinner hour and the first request was to turn down the volume. Peter’s guitar playing is not like your typical acoustic guitar which can be played so softly that it doesn’t matter at all if it’s even being heard. State of the art for contemporary electric guitar, which Peter is a master of, is about style fusion and requires full volume because of the diverse range of sounds and rhythms the electric guitar is capable of. It is much closer to a full orchestra than the average folk, soft jazz, blues, or oldie rock guitar styles.

Within an hour he was able to bring up the volume to where his guitar playing was able to express the incredible possibilities of his skill matched with all that an electric guitar should be.

Originally doing much of his guitar work in the San Francisco music scene in the late 1990’s and early 2000’s, performing with some very notable musicians, Peter is a well-seasoned musician, musical technician, and producer. He has been in and out of Taos for many years and spends his winters in Florida in the studio working on his music. After a several year hiatus from seriously performing live Peter is back with a large catalog of material he has been mixing in the studio, producing four full CD’s of new and older material. I’ve seen Peter in Taos several times playing with local musicians but nothing providing an opportunity to begin to show what he was capable of. This time in Taos it was entirely different.

His style fits within nu-metal and euro progrock styles with a strong homage to all the great guitarists that developed the sound of the electric guitar. New music from around the world, from Japan to England and Europe, is moving to a higher lever of composition and expertise in musicianship, which Peter is totally in tune with. I can see him playing on any stage in the world. It may take a while for new music to begin to filter down to Taos but Peter can show us what it sounds like. He will be close this summer working on new material in Colorado and will be back on a regular basis to Taos. I can’t wait to see him in a venue where the full form of his music can be experienced. I’d put him up against any guitarist, save a few, from the twentieth century.

Peter is backed by a pre-recorded set of original music in which he plays all the instruments. Being all instrumental, his guitar playing is mesmerizing. I sensed no weakness in his playing. I love the sounds that the electric guitar can make with all the effects available and the sounds of the strings as the hand moves up and down the neck of the guitar. Peter has the free movement and full guitar style that is essential to any serious rock guitar playing. This is the sound in rock I’m looking for.

So much of the music I hear is what I was listening to in high school and I am now collecting Social Security. I never expected it to turn out like this. It’s like if in the 60’s everyone was into music from the 20’s. Roots are very important but there is more to music than what has gone before — there is also the new growth that blooms on the branches. For me so much is just old worn out stuff, from the blues to indierock, old folk songs. The twentieth century is so over, and Peter brings music into the present.

So Peter has come out and is ready to begin the process of building his new musical persona and I think the timing is perfect. For anyone who loves the electric guitar, Peter Jong Chang is a musician not to be missed.

Listen to the Tune In Tokyo Podcast with Peter as Guest Host,

CHECK OUT HIS MUSIC!