Kan Namba sits down with Bobby Joe and Jeff of MonoTone Productions. 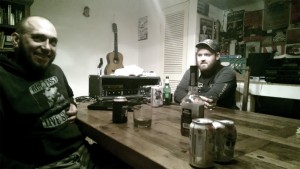 KN: How did Monotone Productions come about?

Bobby Joe: Monotone basically started because no one was booking punk rock in this town. We got sick of it and wanted some shows that meant something to us.

Jeff: We do a big May Day show every year.

Can you tell me a little bit about May Day?

Jeff: Well, first of all, May Day is a workers’ solidarity holiday. It is also an anarchist holiday that goes back to 1886. Haymarket Square,Chicago, 4 police were killed in an explosion, someone threw a bomb. Radical historians like to think that it was an agent provocateur. Anyways, May Day is something we have been celebrating since our time living in Colorado Springs.

Bobby Joe: In 2005 we started doing “Punks’ Picnics” on May Day. The general anarchist approach to May Day these days is worldwide general strike. It is a workers’ class solidarity thing where you just don’t work that day and we…

Jeff: …took to the streets and black bloc marches and what not.

Bobby Joe: We took that approach and flipped it into a day of celebration with games and fun. We would take over a public park and play kickball, have live music, kegs of beer and general hi-jinx.

Jeff: So we decided to carry on that tradition to Taos, knowing that Taos has a somewhat radical community or a sort of anti-establishment community, and it wasn’t something that was done here. In 2012 we had our first one on the Mesa. We had a big blow out and had lots of fun and we all walked away having felt very accomplished from that. I think that was the same year Bobby started turning up the heat, as far as bringing more bands into Taos.

That would be the unofficial start of Monotone Productions?

Bobby Joe: Yeah, and bands just started contacting us. It started sort of organically. It wasn’t like we set out to start a production company. Bands would just contact us all the time and ask us for shows. I had a lot of contacts from the Seco Pearl and started doing these shows at the Valdez Bar. Then those guys opened up the Taos Mesa Brewing and that was a really big help. Big shout out to those guys, they have really helped save loud music in this town. None of the other venues would let us do punk and metal. Those guys have always respected our style and let us have our shows there. So that’s awesome, but the whole Monotone thing came really because bands kept contacting us, wanting shows. We had shows at the Ale House in the early days, house shows and underground DIY stuff. It basically started through that.

When did you guys start getting into punk and metal?

Bobby Joe: Early high school. At this point this is who I am, I can’t even imagine turning out any other way. Oh yeah, I would also like to talk about our hootenanny shows. We don’t always do punk and metal. I think it’s important to know that all of our shows aren’t always super loud. I think our influence has always been in the punk, metal and hardcore scene, but we like all kinds of other stuff too. It’s weird in this collective consciousness of punks, it seems like when we get old we just grow beards and pick banjos. Like these big hootenanny shows, we had that huge Carrie Nation and the Speakeasy, Jayke Orvis, My Graveyard Jaw, Imperial Rooster, Two Ton Strap show that’s genre-crossing all over the place. These are all people that grew up with punk rock and in the hardcore scene, that are now finding other ways to play music. We are always open to that kind of stuff too. As long as you are not a dick you can play our shows.

So there is no specific genre requirement?

Jeff: If you come to us wanting to play punk, grindcore, sludge or doom or whatever, we’re not going to turn you down, but we do expect bands that come through to have a basic understanding of respect for other people. We definitely promote that. People know it when they come into our fold that we try to be welcoming as long as you’re respectful to other people. I think that’s what the DIY scene is about.  There are some other DIY actual venues in New Mexico, Albuquerque and Las Cruces that we would like to start connecting with more. Building a network of having bands coming through New Mexico through a DIY network, I think would be ideal for future projects. That’s what we are trying to do at our house with the house shows; it’s all part of the DIY ethos which is pretty much what Monotone is built on.

Bobby Joe: We also built a good reputation of taking care of bands that come through. If we book a Monotone show you can guarantee you’re going to get fed and you’re going to have a place to stay.

What does the future hold for Monotone Productions?

Jeff: Continue doing what we’re doing. A long term goal is for an actual DIY venue to spring up in Taos but really, more, have some of the younger kids take charge of it and take direction and control and we could just be there to help provide any resources that we can, but that’s long term. I feel like for now bringing edgy bands, bands that are up and coming on the underground, bring them to Taos and keeping Taos vibrant and interesting and not boring. 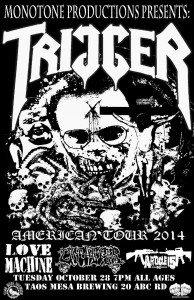 Bobby Joe: October 28. Taos Mesa Brewing. Straight out of Germany: Trigger and Love Machine, both bands are grindcore to blast beat your face off. Laughing Dog out of Albuquerque is old town grind, then Catheter, some old friends of mine from Colorado Springs and Denver—super sick brutal music. And the local boys going to get it going — Article 15, political punk in your face.