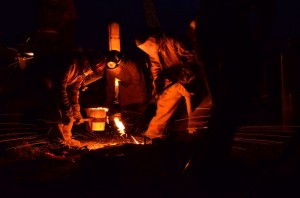 Taos is interesting. Unique and crazy things happen here. The weird and wonderful landscape, community, performance events, and collaborations between artists are what we love most. Iron Brew 2 unites them all on Saturday, December 20th, at Taos Mesa Brewing Company.

The first Iron Brew, in 2013 at TMB, was one of the most exciting and successful events in the venue’s history. Torrential storms drenched the land, but were no match for the intense heat and fiery glow of the Iron Brew furnaces in the courtyard. The large crowd braved the weather under covered areas while some circled even closer under umbrellas and rain-gear, drawn in by the compelling, dance-like movements of the group of iron artists and their bizarrely beautiful craft. The furnace roared, sparks flew, molten iron glowed orange and spattered and poured, thunder boomed, lightning flashed, and attendees left raving about the experience. “It was mythological and magical and elemental. And I’d go again and again and again,” said local author Shawna Williams.

A handful of teenagers melting metal in a fire-pit in a backyard… that’s where it all began for one of the founding artists of Iron Brew 2, Ben Remmers. One day in 2002, far from his backyard in Baltimore, Maryland, Ben wandered the campus of New Mexico Highlands University in Las Vegas. Following a trail of interesting sculpture, he found his way into the back door of the university’s foundry. The first people he met were David Lobdell, the foundry professor, and Lobdell’s student assistant Lance Wadlow. Their meeting began a long and prodigious fellowship in iron artistry. During the next year, NMHU hosted one of the first Iron Tribe conferences, where the performance-pour of visiting artists set Ben’s imagination alight.

Iron Tribe is an internationally-attended production pour and performance event hosted by NMHU in Las Vegas, NM, every two years. The largest iron art conference in the Southwest, Iron Tribe brings artists from around the globe, from Scotland to Japan and beyond, to witness and take part in metallurgical creativity. “The thing is, casting iron is traditionally a large-scale, industrial process. To make it work and create on a smaller scale, we have to invent and build our own tools and methods,” explains Remmers. “We’re really pioneering the craft, which we then get to share with the rest of the world.” Iron Brew 2 is a collaboration of several Iron Tribe artists.

The creator of Iron Tribe, David Lobdell has been the foundry and ceramics professor at NMHU since 1991. His long history of audience-inclusive installations include his fiery wish-archway at the first Iron Brew, which allowed anyone to burn away thoughts or beliefs, written on paper, that they wished to send up in smoke. Lobdell is one of the primary contributing artists again this year, as well as the teacher and mentor of most of the other central iron artists.

One of his most dedicated and accomplished protégées is Lance Wadlow. Wadlow designed, built, and has continued to perfect the primary furnace used at Iron Brew events. Lance Wadlow’s work has won several awards and he is a featured artist at multiple galleries in Kansas City.

Thor Sigstedt is is a sculptor, builder, rustic artist and author based in the Santa Fe area. Last year’s Iron Brew contribution to the TMB landscape was the raven sculpture, conceived and then cast by Thor on-site.

Taos local artists Kim Henkel and Justin Kaysing are also Iron Tribe veterans collaborating in the event. Henkel, a metalwork and sculpting professor at UNM Taos, says, “It’s always an inspiring and motivating alchemy to be a part of the iron pour.” Justin Kaysing has been pouring iron with Remmers, Lobdell, and Wadlow for more than ten years. “Every time you ignite the furnace something elusive and exciting happens,” said Kaysing. “There’s limited control, molten metal splashing around you, and you never know if the pieces will come out anything like you imagined.” 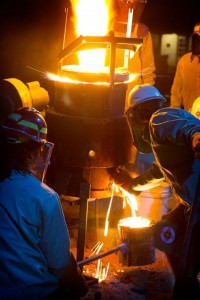 “Lil’ Ed” is the improbable name of the towering, fiery behemoth of a furnace built by Wadlow, which is a gothic masterpiece in its own right. Around the freaky, skeletal metal rib-cage and skull welded onto the front, the furnace spews flame and molten metal, stirring the tamest of souls to a hedonistic glee. “Once the pour begins, you’re a slave to its needs until the end,” says Remmers. He explains that the furnace needs feeding, watching, tending and pouring, in a careful rhythm while the coke burns.

“Coke” is the word for the clarified and condensed incarnation of coal. Coke burns much cleaner and more efficiently than coal, but its most essential role is in getting hot. Like, insanely hot. Iron requires a high temperature to melt — much higher than propane or conventional fuels could provide. Lil’ Ed returns in all his glory under the careful ministrations of Wadlow and fellow artists, along with additional new furnaces. One special new furnace is brought by Thor Sigstedt, adding bronze to the mix.

Beyond foundries and furnaces, the invention of their own tools and methods extends to innovative mold-pouring — one of Sigstedt’s favorite molten iron molds is an emptied snake gourd, which is a plant that grows plentifully on his Adventure Trails Ranch just north of Santa Fe. When the molten iron pours into a gourd, fire shoots out the other side. Art ensues.

This year, to guarantee an ever-more dramatic performance display, the artists will include several “combustible molds,” built out of plywood, drywall, and more. “When you get the combustible materials in play,” said Remmers, “the real fireworks happen. These are molds designed more for the experience — whatever art comes out of it is a fun surprise. And really, everything is combustible… once you get the temperature high enough!”

Iron Brew 2 includes a rare opportunity to take part in an old-world blacksmithing workshop. Beginning at noon, four Iron Tribe veterans and experienced metal artists lead a hands-on introduction to the methods and craft of ancient blacksmithing. Participants will leave with an understanding of a variety of techniques, as well as the actual creations of their day’s work. Anyone interested should reserve a spot immediately, as space is limited. 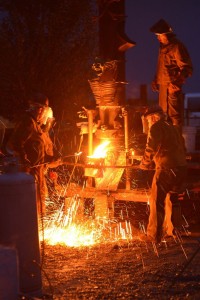 The team of metal artists reunite on the 20th to bring their craft to Taos once again… and this time, it’s personal. After last year’s Iron Brew, the collaboration between the Iron Brew crew and the Taos Mesa Brewing team is strong. One of TMB’s owners, Peter Kolshorn, calls the first Iron Brew his favorite TMB event to date. Another owner, Gary Feuerman, said, “The iron performance was not only strange and hypnotic, but just the kind of thing TMB is forging a reputation for. We look forward to more!” Head brewer, Jason Wylie, has a special brew in the works just for Iron Brew 2, to highlight and help fund this special event.

And there is the rub: funding. The artists intend to melt 100-200 pounds of bronze, and around 1,000 pounds of iron. The sand and ceramic molds, not to mention the performance-designed combustible molds, require a lot of resources before metal has entered the picture. The necessary raw materials demand an abundant supply of scrap metal, and the crew is looking to collect all the cast iron they can get their hands on, including old bathtubs, radiators, drain-pipes, boilers, and more.

An “Iron Drive” Facebook page and local calls for contributors are still seeking materials — anyone who has old cast iron to donate can contact Justin Kaysing, event co-organizer and contributing artist, at Wired? Cafe, (575)751-9473. 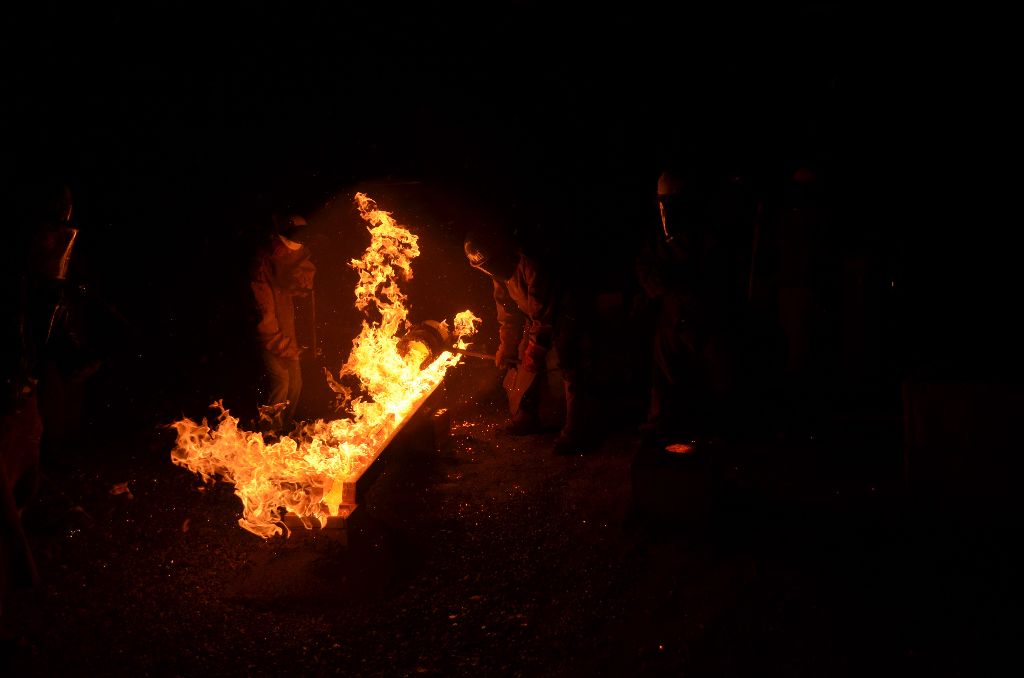 The creative process is the heart of IronStein. Founded and run by Ben Remmers, IronStein is a business platform for metal artists to manifest their creations. Setting up Iron Brew 2 and similar events is just part of IronStein’s mission. “The purpose is returning the art of making and the making of art to daily life, for the security of our future,” says Remmers. “If we energize artists and the making of things, we guarantee creative solutions in the future.” He and the “tribe” are working to reintroduce the ancient craft of cast iron and highlight the range of creative potential to the global community.

“It’s all about tribe, really,” says Remmers, explaining the inclusion of traditional Aztec dancers in the event. Along with the Aztec dance troupe, fire-dancing and innovative and dramatic fire-features are planned, which will keep observers warm and entertained amidst the blazing metal pouring and live bands.

During the afternoon, local Leonhardt brings a gritty blues/country sound until Abe Garcia & Strings Attached, of Las Vegas, NM,  takes over with their blend of folk, alt-rock and acoustic music. At 8 pm, New Mexico’s beloved Nosotros takes the stage inside.

Iron Brew 2 gives Taos metal-workers and enthusiasts a once-a-year chance to unite, and a chance for all to celebrate the solstice with fire, create art and memories, and share an experience unlike any other, Saturday, December 20th at Taos Mesa Brewing. The free performance pour is at 4 pm. The blacksmithing workshop begins at noon. Email [email protected] to reserve a workshop spot and for fee details.

There is a $5 cover for Nosotros at 8pm.