Painting Live to the Beats of PO.10.CEE & Art of Flying 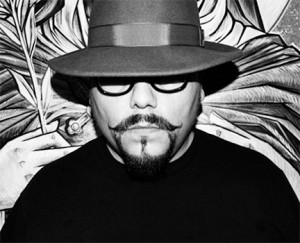 Taos Artist El Moisés has been a busy man of late. In addition to a recent spread in Low Rider magazine, the Mexican-born, Phoenix-raised Moisés Salcedo has been one of the curators for the upcoming Órale! show at the Harwood Museum, has been commissioned to paint a large mural back in Phoenix, and, perhaps most importantly, has been accepted into a group show in LA commemorating Gilbert “Magu” Lujan, one of Los Four, the Los Angeles-based Chicano collective that exploded on the West Coast art scene with a culturally-awakening show at LACMA in 1974. 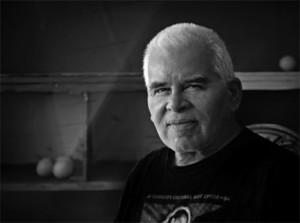 El Moisés’ recently finished painting of Lujan is a potent symbol of contemporary Chicano imagery, as well as a heartfelt tribute to a dear friend. In his own inimitable way, Salcedo’s incorporated several styles into a vibrant palette that pay homage not only to Lujan, but serve as a sort of codex to the relationship between “Magu,” and the young Salcedo, who has fond memories and great warmth for his former friend and teacher.

Salcedo’s mastery of the brush continues to flourish in Taos, and the impressive body of work produced in about the year he’s been in town is to be marveled at. In addition to the Magu homage, there’s a stunning portrait of Rudy “Corky” Gonzales (Denver-based founder of the Brown Berets, a 70’s Chicano organization), as well as his anthropomorphized “gangster canine” series that find one marveling at the uncanny resemblance between dogs and their owners, and the “dog” inside some.

This Saturday, September 6th from 8 to 10 pm Live Taos will be presenting El Moisés at the R.C. Gorman gallery in Taos, where he’ll be working on his latest piece, a sort of galactic Viracocha, the Incan creator god, imagined in a timeless manner with Hindu, Mesoamerican, and Alien imagery.

Moisés will be creating to the live beats of Hip-Hop group PO.10.CEE from 8-9, and later, to half the local musical duo Art of Flying in the historic setting of the RC Gorman home. Come and hang with Moisés and his crew at RC’s and get a taste of the style of one of Taos’ most talented.