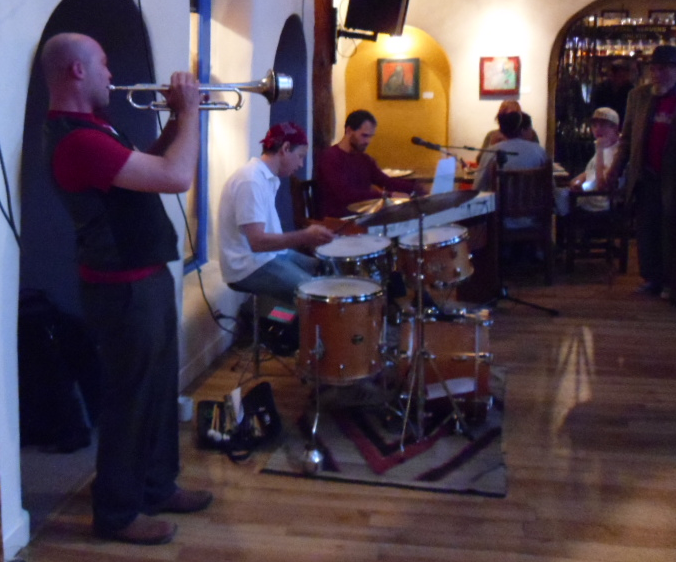 Jazz Explosion was formed by trumpet player, Russell Scharf. As he tells it, this was at first an act of professional necessity, and this checks out. Any horn player arriving in New Mexico off of a job playing on a cruise ship is going to recognize the need to have some sort of hand in any style of music hiring live players. Once Jazz Explosion had been together for a while, and funk and indie rock influences started to play into their compositions, Scharf said the act continued out of a growing passion for the ensemble’s take on jazz and fusion.

These are young guys, and one has to first get over the idea of a “straight-ahead” jazz act to be ready to enjoy them. At the Taos Inn, if you have seen any of John Trentacosta’s lineups, or going back a ways, Lewis Winn and John Gagan as Two Tone, you have to understand that this band is another kind of act entirely. The Santa Fe and Albuquerque based names I just mentioned, along with our own beloved anti-hero, Raymond Blanchet, are what we call jazzbos. One of the things the well-received Jazz Explosion performance on March 29th goes to show is that the word ‘jazz’ is by now about as broad as the word ‘rock;’ but unlike rock, it is no longer important to differentiate the subdivisions, except within the distinguished community of jazz musicians and more critical fans. There are two sides to this coin, as I will explain; but first, the evening as I heard it:

The first set was a warm up. I tried to corner them about it after the show without being a complete prick, but alas, that fine line eludes me almost daily, and this time I erred on the side of sweetheart. Regardless of the crowd’s enjoyment, which was shown warmly and enthusiastically, the keyboardist Robin Holloway had not locked his bass lines in with the drummer yet, or visa-versa. Bass is actually the driving instrument in music with a “swing,” and it may have been a challenge for drummer Britt Alexander to get used to the idea of that drive not coming from their regular bassist (Case Tanner) for the first time in a couple of months.

They opened with Miles Davis’ “Freddie Freeloader.” To a snobby jazz crowd, this would have seemed at best a suspicious choice, because the album Kind of Blue is probably the single most-overplayed album in jazz recording history.  Regardless, Russell Scharf was unshaken in his playing and demeanor throughout awkward moments between his two rhythm players, and blew solos worthy of his reputation and awards. 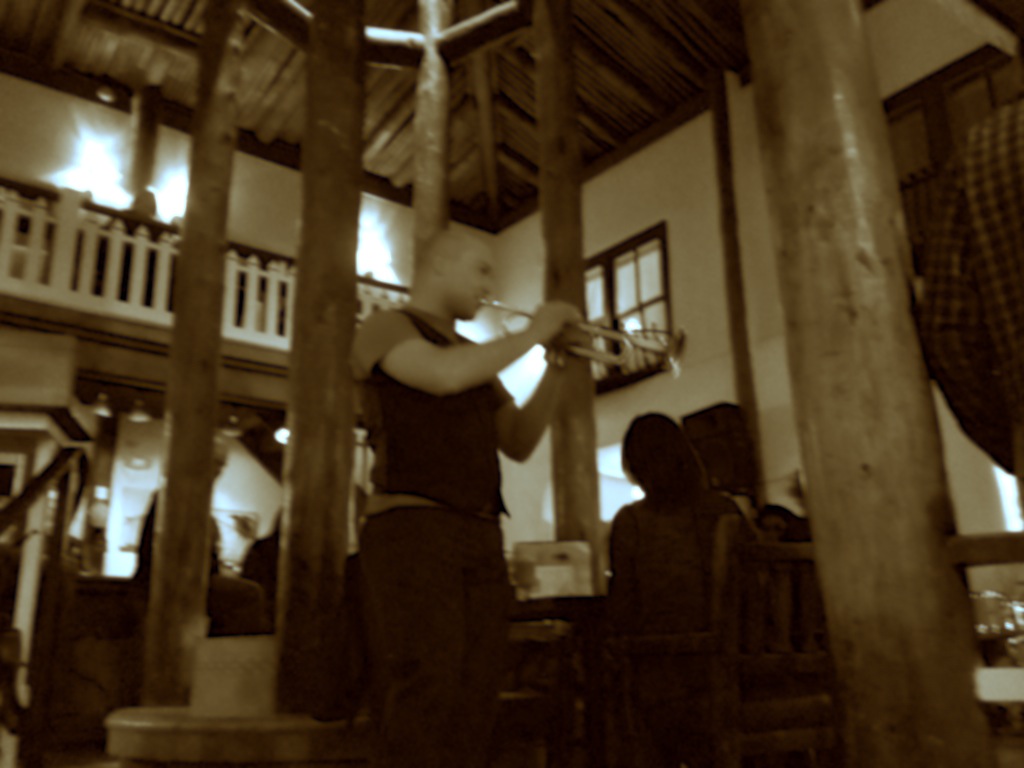 Into the second set the rhythm section started to groove, especially with Scharf’s original tunes, and by the start of the third set the band hit some very sultry improvisational territory, and didn’t let up on it for the rest of the night. Scharf attributed this to the crowd’s growing response as the evening went on. As an improviser, Scharf jumped on every opportunity to stretch out; he has a great sense of space and whimsy in his solos. Britt Alexander finally took a drum solo I could identify as both jazzy and interesting, involving some fine tom work including a strange gimmick I have never seen—using his right foot on the floor tom.

The fact is, it takes soul to pull a terrific show out of a sluggish beginning, and this supports my bottom line statement about the evening—they had come to play, and wouldn’t have let anything take them down.  I had to shake off some dark voices in my head along the way, voices telling me that everything hinged on the jazz standards they chose. Their rendition of “Blue Monk” was fairly plain to my ear, and Herbie Hancock’s “Watermelon Man” is a horn based ensemble cliché. But the fact is real people still love hearing anything off of Kind of Blue, live and referential to the recording. I might be able to say the crowd was mostly uninformed about jazz, but I can’t blame a band for picking tunes that keep people drinking, as that has been the nature of so many musician’s jobs for centuries.

For my money (spent on a cold hamburger delivered as per my unintentional negotiation via a resentful trip to the balcony, taken by my new favorite darling of a poorly-tipped bar-tender), it’s the original tunes that stand out in Jazz Explosion’s repertoire. In these I heard moody, melodic, Latin jazz influenced groove, and wanted more.

You can check out Explosion’s recordings on Amazon before their next performance at Taos Inn on April 26th by clicking here.