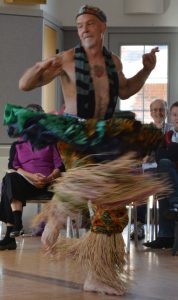 Come experience the Music and Dance of Haiti, led by Johnny Scovel on Saturday, February 28th and Saturday, March 28th from 10:30am until Noon at the Taos Mesa Brewery.

On most days, you can find Johnny Scovel working. Manual labor. Whether it’s cleaning horse stalls, cutting firewood, welding, plumbing, or underneath his old Ford. He is a man of many talents. In his youth he was a knee-dragging motorcycle track racer. For many years now, Scovel has been an avid archer, living his life in the mountains of Colorado every September, hunting elk. Most years, he comes home with no meat, and takes not a single shot.

Johnny Scovel has another side. He is a living treasure full of the ancient rhythms of Haiti and Cuba. For over 40 years he has been obsessed with this music, these drum and dance rhythms.  He has studied extensively with John Amira in New York, and was Amira’s assistant at Naropa back in the 80s. After three trips to Africa, Scovel has seen how the religious ceremonies, music and dance relate with what is happening in Haiti, where he has been twice. “Haiti,” Scovel says, “has been so isolated all these years that what they’re doing is almost truer to the past than what is happening in the Mother Land.” When asked to describe the difference between Haitian and African dance, he says “It is Afrikan. It’s not like West African though, or Guinean. It’s subtle and more akin to ballet.”

Scovel lived for decades in San Francisco where he constantly participated in dance classes and ceremonies, all the while educating the interested. He has coached all-ages, from pre-k to senior citizens.  Scovel breaks the rhythms to their simplest form, and then builds them back up with you from the bottom. You begin to truly understand how it all works. Danny Davis, a long-time student and friend has tried to count all the rhythms Johnny knows. He has around 65 written, but Johnny keeps bringing up new ones he has never taught before.  The reason for this lies in the fact that he will never be done learning. To this point, Scovel says “Once you are done learning, it’s over for you. Many get caught in that trap.”

The taking of someone else’s culture and traditions and using them to suit your own needs, or cultural appropriation, is an issue for Scovel. It is one of Scovel’s reasons for being so acutely aware of keeping to tradition. He knows what the Haitian people have gone through, he empathizes with them and feels the power held in these rhythms.  He honors the people and their culture by keeping everything true to form. He is cognizant of where each rhythm comes from in Haiti, sometimes down to a single Lakou, which is kind of like the neighborhood church. He also differentiates which tribe or nation in Africa individual rhythms are connected with. Scovel has been playing this music ceremonially for over 30 years in New York, Florida, San Francisco, Haiti and New Mexico. 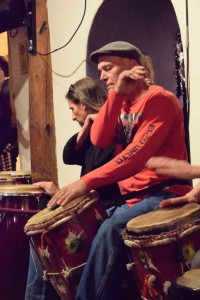 The power in these rhythms lies in their ability to connect you with a greater spirit.  The dance is the same way. These traditional dances are a form of supplication or prayer. You are praying not with words but with your body. Annya Ishtara, a student of Scovel’s and a dance teacher herself says “I really appreciate Johnny’s sensitivity around connecting the music and movement because, from a dancer’s perspective, they have to work together or they don’t work at all. His knowledge of the cultural context of Haitian drumming and dancing is vast, and gives added dimension to dance class. I also enjoy his sense of fun and his passion for sharing what he knows”

Scovel advocates knowing your own personal history, where your family came from and the hardships they endured. Perceiving this connection with your own past and feeling the struggles your own people went through, makes this ancient religion more relevant today. The conflicts the Haitian people endured for their freedom and their religion are horrific. We honor them and our own ancestors in their strife when we come together to play and dance the music of Haiti. Leah Wilde, who has been a dance student of Scovel’s for nearly 20 years, adds “his class is not just a dance class, but a cultural experience. We learn about the dance, the music, the song and the religious aspects of Haiti. Johnny never falls short of a great story adding depth and fun!

Johnny’s wisdom is a treasure, and his sense of humor is contagious.