Rolling Stone compared him to Jimi Hendrix and Stevie Ray Vaughn. He’s been called the African Clapton. He’s played on Late Night with David Letterman and at the most prestigious music festival around the world. Everything you read about Habib Koité includes heaps of superlatives and praise. Bonnie Raitt summed up the Malian guitarist and singer’s genius best when she told him, “I’d drink your sweat.”

“Taos is having a real love affair with Malian music right now,” says John Henderson of Roots and Wires, which has promoted world music and reggae shows in Taos for over 15 years. (The Roots and Wires radio show on KTAO celebrated its 17th anniversary on January 26th.) “Habib is the sixth artist from this region of the world we’ve brought to Taos in the last year and a half. The Taos audience really responds to the music and the people from Mali.”

In 2012, Koité sold out the Lensic in Santa Fe when he played with bluesman Eric Bibb for a Mali Meets Mississippi show. He’s played Santa Fe solo and with his band, but as far as Henderson knows, Koité has never played in Taos. The show at Taos Mesa Brewing is the only show he’s doing in New Mexico this tour.

“We’ve never had an artist fly in a full band for just one show. Sometimes someone might fly in and play Santa Fe and Albuquerque, but not just to come to Taos,” says Henderson. “I have been trying to get him for years and we are so happy to finally make it happen.”

Koité was a world music superstar of sorts in the 1990’s, partly due to his association with Putumayo Records. With his band Bamada, which he formed in the late 1980’s, he recorded a number of highly successful albums and toured the world. To create a new sound for his album Soo, which is due out this spring, Koité brought in a new cast of musicians and instruments. He kept the name Bamada, which is slang for a resident of Bamako, Mali’s capital.

On his albums, Koité has always been interested in synthesizing the diversity and richness of Malian music. His new band members come from different parts of the country and play a variety of African and western instruments. He’s even added a banjo.

Soo is the Bambara word for home, which is where the album was recorded—in Koité’s home studio in Bamako. Recent unrest in Mali, particularly in the north where terrorists connected to al Qaeda in the Islamic Maghreb (AQIM) banned music and dance, has done little to discourage Koité. A number of other well-known Malian musicians have sought refuge, at least temporarily, in Paris, but Koité continues to live in Mali, where music is as essential as food and water.

Henderson knows many people in Taos who are familiar with Koité, but few of them have ever seen him live. Koité usually plays theaters, performing art centers and world music festivals, so a show at a club venue like Taos Mesa Brewing is a rare treat.

“This show should be a Taos Classic,” says Henderson.

Local favorites Brent Berry y Tambien open. Tickets are $18 in advance at Bodega Fresca and Magnetic Records or at taosmesabrewing.com. 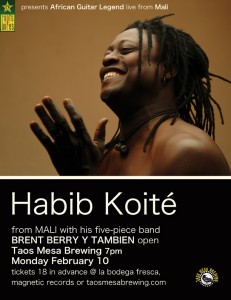