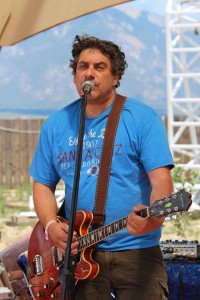 Not only did Gregg Turner work as a music critic at the legendary Creem magazine, he also was one of the founding members of the influential LA punk band the Angry Samoans. I was lucky enough to meet him at the Live Taos Music Festival last summer, where I was introduced to his solo work. Gregg recorded a solo album with Taos’ own Dave Costanza and plans on recording another with Dave in the fall. Gregg will be playing at the Taos Ale House on Saturday, July 19th at 8pm.

Sarah Hart: When did music first make an impact on your life? What was the first album you bought?

Gregg Turner: I useta listen to top 40 radio as a pre-pubescent kid all the time.  Couldn’t wait for the countdowns each week. First single I bought was “Gimme Gimme Some Lovin” by the Crazy Elephant!  First album was uhh, I think it was a KINKS record, the one with “Sunny Afternoon” on it.

What brought you to work at Creem?

I was writing for a local fanzine in LA around 1975 called Back Door Man, a real hyena-hyper tabloid that was pretty vitriolic on most of the local music scene. This went on for several years. Eventually one of the LP review editors at Creem spied a copy of the zine, and liked my “irreverence” (that shoulda been a tipoff as to where it would go). I then wound up doing mostly hatchet reviews of deservedly-hatcheted albums (got lots of hate mail and death threats for a slam of a latter-day WHO lp, wrote a “Dear Ted” letter for review of a Nugent LP (advised him that a Gibson Melody Maker was a great guitar on which to learn how to play (he apparently freaked out to the editors on this one !)) and so forth.  But I also scribed some heavy advocate features on Roky Erickson and the 13th Floor Elevators and the like, so I wasn’t a total Mr. Negativity.

How did being a music critic Affect you as a musician?

Well, having slammed a good many music icons and projects in print, I felt  the pressure of playing in some reasonable fashion. To this day, I make no pretense about being a great musician (hardly)! Which is sorta embarrassing cos I’ve played guitar for over 35 years! But I don’t think songwriting and performing necessarily is predicated on being competent alone. You tell stories and depict feelings and if you’re genuine and legitimate in offering something of substance and different-ness, something that hasn’t been said a million times already, something that conveys part of yourself that captivates people — then that counts for more than anything. I feel it’s incumbent on the performer and songwriter that he/she should make the case that they are in fact compelling and worthy of folks’ consideration. Otherwise it’s just ego and attention needs pushing people to get up to be in front of an audience. And that can be pretty boring and self-involved.

Was Vom your first band? How did it transition into the Angry Samoans?

Yeah, VOM was first round of self-flagellation! We threw worms and assorted viscera at the audience and wrote “tunes” like “I Live With The Roaches,” “Dare To Be Dumb,” “I’m In Love With Your Mom,” etc. Richard Meltzer, one of the most famous rock writers of all time (next to Lester Bangs who also was an editor for Creem mag), was the lead-“singer.” We played about a dozen times. The finest gig was at the Whisky-a-Go-Go on the Sunset Strip. We had the power turned off on us halfway thru the set, apparently the only other band besides Jim Morrison and the Doors to be terminated and thrown out onto the street mid-set! A dubious honor!!  Finally Vom just imploded of its own negative vibes. Drummer Mike Saunders and I, tho,  were having too much fun to just let it go. So I suppose insufferably we proceeded with a handful of foul and tasteless songs. I caught a pro wrassling performance on TV not soon after. There was a bad-guy tag-team called the Wild Samoans. The rest is, uh, history. Or something like that.

What came first, wanting to leave the Angry Samoans or wanting to be a math professor?

I was always pretty good in math when I was an undergrad at UCLA. But never imagined a career doing it.  Plus I was having too much of a blast in the Sams.

This was in the early 80’s. Eventually I came to my senses that despite having accrued a sizable following,  the Sams wouldn’t be my meal ticket for life. So begrudgingly I went back to grad school, still playing with the Sams at the same time. I completed my doctoral dissertation (the title was “Spectral Conditions for Stabilization of Controlled Feedback Systems of Differential Equations with Piecewise Constant Arguments,”  if anyone cares) just prior to the last official Samoans gig in 1991. Grad school was like punk-rock math! Crazy math professors that got disoriented and drooled while lecturing. I was in heaven!!

Why did you decide to leave California for New Mexico?

After my Ph.D. at Claremont Graduate University in 1991 I did a post-doc at UCLA (and the job market was abysmal) and eventually got an offer at the College of Santa Fe in 1993. And that brought me out to NM.  After that, it’s been totally the Land of Entrapment! I’ve become so desensitized to the hubbub of the rat race in a big city, I can’t imagine  moving back.

Who are your heroes — in life, music, art, etc…

Life-heroes —  hmm. I suppose I should say something profound, like Gandhi, but I think I’d vote for Roger Corman (“Attack of the Crab Monsters”).
Music — certainly Lou for the Velvets, I named my daughter Nico — after Nico of course. ANYTHING Ray Davies, Jonathan Richman, Tom Lehrer.
Art —  guilty pleasure – Jackson Pollack;  I’m not an O’Keefe fan. Love Van Gogh!! Magritte, and Picasso.

I have favorite songs for specific moods I’m in, can you give a couple of examples of your favorite albums or songs and the corresponding mood?

Great question, Sarah. Usually that happens when I’m driving already in a certain frame and if I hear a song in that frame of mind it sticks.

When I was really lonely my first year in Santa Fe, I got a copy of Kerosene Hat by Cracker (can’t remember why) and played the tune “Low” over and over. Now when I hear it, it still conjures up the same feelings of isolation and discontinuity that I was feeling back then.

When I lived in Boise, ID for six months (that’s another long story!) I played Death Cab for Cutie over and over and that woo-woo song that was sort of a hit for them, “When Soul Meets Body”  stuck. So now I feel Boise and the dark moonlight that enveloped me when I’d take these midnight drives around the city and in the hills.

What influences your songwriting now?

A lot of these things just come to me. I’ll be knocking off some chords on my guitar, just flirting with different progressions. Something comes out as a melody or interesting idea and if it’s any good, it takes hold and I stick with it in several incarnations — maybe it actually evolves into a full-fledged song. Often, I start out with just the song title. That somehow morphs into the type of song it grows into — 60’s psych-out, 50’s ballad (Ricky Nelson!), or just some weird amalgam — I can’t figure it out.  It sorta takes me for a ride with it — “it”  being the construction process of putting it all together. My Santa Fe project called the Blood Drained Cows (late 90’s thru 2008) was a garage-rock exercise. So I’d have songwriting calisthenics mining Velvets, Elevators, Kinks and the like + a few ballads thrown in for contrast.  For the solo stuff I’ve been doing, I try to make it a project selling feelings and moods, but in some original way that’s different, that sells something about myself that folks can relate to, but hasn’t been done ad nauseum. I won’t ever be accused of being Jon Bon Jovi!!  If that ever happens, please reserve for my 3-cocktail lethal injection.

You have come to Taos a couple times to play, what do like about Taos?

I just love Taos. Santa Fe is pretty, but Taos is spectacular. The colors, the deciduous trees! The seemingly tight-knit community of art-folks. Audience reaction seems genuine not affected. Playing solo anywhere is pretty hard work, you can’t lean on band members or volume for keeping people entertained in a bar setting, but I’ve always had good luck at the Ale House. 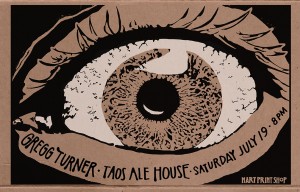