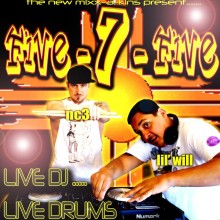 1. How did you come up with the idea to be a DJ with a live drummer?

Will: It was a bottle of Jameson.

Norm: I was in LA and I was in a band called STEREO CHEMIX with the drummer from Limp Bizkit — who asked me to be the drummer for STEREO CHEMIX so he could rap. I just kind of got flushed into this scene of drummers. At the time Blink 182 was on hiatus and Travis Barker started doing club gigs in Hollywood with live drums and a DJ, and it just was dope. The shit went off the hook.

Will: How that started with us, was we figured it out. Because we didn’t even know. [We were] hanging out after a gig and we were talking about music and I just started throwing some records. I was throwing these old jazz, you know, shit you would know if you lived in New York City, you know I was just going down memory lane. And, then before you know it this fuckin’ guy starts drumming on top of everything that I’m playing and I was just like, wait a minute! We played for like an hour and a half, like, not even knowing what we were doing. You know I just thought we were drunk on Jameson and, then Matt Ceekay was there and said, “That’s a show. What you guys just did there is a show.” I was more skeptical, like “No, we just drank a lot of Jameson…” So, then we had our next practice and we did it again, and it happed again. It just clicked. We were like, “Ahh, we got it.” I mean, he felt a little more comfortable with doing it. I was probably a little more unsure about it. But, that second time when we did it, it felt really good and I thought that this could be cool.

2. Have you had a good response so far?

Will: Yeah, we have. Definitely.

Norm: Not that enormous night. A good DJ is fun, but when you add a little piece of organic rhythm flavor to dope music that people already know and love it makes it that much more live.

Will: Something about the drum. It just brings the primal beat. And, too, I’m from the school where you don’t really see the DJ. You know, I’m from New York, so you never see the DJ, you’re never next to the guy, but here everyone’s watching what you do. There’s a little more of a performance aspect, and having Norm on the drums, people just gravitate towards it.

Will: I notice that now we ‘re starting to get a little following, you know people who know us and our sound. But, for the first four or five months, every crowd was a totally different crowd of people. It wasn’t just the same people over and over again. We had different crowds. And then people who’d heard of us started coming to check us out saying that they’d heard what we were doing. It’s still growing. We just started in April. So were still figuring it all out as we go: what kind of music we want to play.

4.  Taos has a large variety of people who like to go out and dance and get groovy. Do you feel like you’re covering all your bases musically, as far as what people like to dance to?

Norm: We going to do what we want to do, and this isn’t the first time a DJ has collaborated with a drummer, but it seems like for Taos, it’s pretty new. And, that’s exciting.

5. When are you going to play Santa Fe or Albuquerque?

Will: Right now we’re focusing on a demo. Trying to put something down for people to hear. That’s not far off and when the Ski Valley goes, we’ll probably do some shows up there. And that will be another avenue to get people to hear us. I mean the ski valley is world-famous, so there are people who come up here. You know just getting our thing out there. And we would love to go south. Or north or west, but Santa Fe and Albuquerque are closer so we’d probably start expanding to there first.

6. How do you see Five-7-Five progressing musically?

Will: Eventually we’ll have to get to the point where we start making our own music. I think if we keep going, that will be the natural progression of it, making our own tracks, our own songs, you know, our own beats, I mean.

Norm: Take a Top 40 club banger and redo it.

Will: Yeah, that’s what I’ve been doing, remixing a Biggie song, remixing a Jay-Z song, you know, the stuff we already know and then with the drums, it’s like a remix of the remix. It’s all fresh. Even though you’re hearing the same stuff, it’s totally different. It’s not like listening to a song on a record. I’m already remixing that song and then with Norm’s playing two totally different things going over a track that everyone knows and everyone likes to dance to. It’s not the same boring old shit. You’re hearing original shit. And, a lot of it is being made up on the spot. I’m taking the energy there of the people who are there and knowing what people like and it’s happening right in front of you. We’re going for that big club sound and it really lends itself to Norm’s improvisation. We’re playing dubstep, house… (Will then lists about fifteen different types of house and other types of electronic music). We’re not just stuck playing the classics and what people know. We’re not just in one little box. Because of his ability, his playing and my DJing, people may not know what I’m playing, but they get the energy I’m giving them. And, you can just look around the room and you see it.

Norm: It started off as the New Mix-i-cans.

Will: Yeah, we called it the New Mix-i-cans, but then it became The Five-7-Five. I don’t know, we were thinking about 311 and I wondered how do these goofy bands get their name? And we were like, Five-7-Five, it just worked.

8. Will, you’ve been a DJing for a long time, and Norm, you’re in 4 bands that play live around town. Have you noticed a difference in how you play together versus playing as a solo DJ or with a full band?

Will: How he plays affects how I play too, because, he’s there with me. And, I don’t know if other people are catching it. Maybe it’s because I’m right next to him, but I can hear the different things that he’s doing, the extra stuff he’s doing, just getting hyped up. And, then I get all hyped up and it brings my level of play up and then he gets hyped about what I’m doing we’re collaborating. And, we’re talking to each other the whole time, too. We’ve got little hand signals worked out. And, sometimes I can go on a tangent, so it’s good. He’ll remind me to switch up. And, that’s so that we never have the same old boring set. The music changes. It’s always different and refreshing.

Norm: And I never know what the set’s going to be.

9. So, it’s totally improvised? Do you guys rehearse?

Norm: Not once, actually.

Will: We have a couple times, in the beginning, to figure out what works and what doesn’t. And, that’s the cool thing about not having a preset thing, is I can go into a room a I can tell who’s there and I know what they like, I know what they want to hear. It’s a small town, I’ve lived here for 17 years and I know what people want to hear. If we were to play a bigger event or a crowd where no one is going to know us, we’ll have it a little more planned out.

10. How do you guys manage working together without it being a total train wreck? I feel like that takes some skill.

Will: It does and Norm is such a great drummer, I definitely feel like I need to bring my best, too. I can’t let him one-up me. I think some people around here think that a DJ is just like a fucking iPod, but I’ve put a lot of energy and money into music and equipment and I’m like, “Here’s what I got, here’s what I brought and it’s dope.” Mixing records is bringing the time of two separate different tracks together in one continuous flow. It all comes at the right moment, at the right time, and you can’t create it, you just have to let it come.

Norm: There are a lot of factors that could cause a train wreck.

Norm: And stay in time.

Will: And stay in time. So, he has to be able to hear all of that and translate it instantly.

Norm: And, It’s a physical workout, for me. I mean really. When I play with Katy P or the Hawk, I have 15-30 seconds between songs.

11. Do you have anything special planned for your Wednesday night show before Thanksgiving?

Will: Yeah, that’s what we’re actually going to be working on here right now. We’re looking at it as an opportunity to get more people to know what we sound like, because the Wednesday before Thanksgiving is usually a pretty big night.

Norm: And people know it’s dope, so hopefully they come out.