Summer in the Southwest these days seems to bring an onslaught of folk, Americana, and roots festivals raining down on the region. If you’re ready for a change of musical pace, never fear: on Friday, June 10 at Taos Mesa Brewing, AllTheMachines.Net presents Barcelona-based audiovisual artist Filastine, along with an impressive slate of other producers and DJs.

This is All The Machines’ first-ever live event, and they’re bringing the heat. Filastine alone makes for a great show, and he’ll be taking the stage with Javanese songstress Nova and the original live cinematic experience 4RRAY (say “foray”) — and rather than search for the right words to explain this, let’s just turn to YouTube:

And there’s more than just that to look forward to:

“Some of New Mexico’s best and brightest producers and DJs will be supporting him for the night, as well as Minneapolis’s very own Bionik, a legend who just won The Untz Challenge…a fairly prestigious contest in the bass music world that landed him a spot at the biggest festivals in the US this summer,” says Josh Cunningham, the Taos artist who is better known in these circles as Kanizzle — and who incidentally is also on the bill for the evening.

Filastine has played TMB before, and this show is being billed as the “encore to end all encores.” Josh, I’ll let you tell the people why they should come out:

“Filastine is on the cutting edge of merging technology and art. Music and video, all created and curated by the artist, and compiled together into one of the more compelling live shows around today,” says Cunningham. “Although he gets lumped into the realm of other ‘electronic’ artists, I think it’s better to bill him as a ‘multi-media percussion driven bass heavy socio/political discussion inciting bass music extraordinaire.’”

Hey, with that many adjectives, it’s gotta be worth a trip to the Brewery on a beautiful late-spring evening to hit the dance floor with several hundred of your new best friends.

Oh, and if you’re looking for yet another reason to check out this event: LiveTaos has been promised that there will be fire. Lots of it. Of the spinning/throwing/captivating entertainment variety. 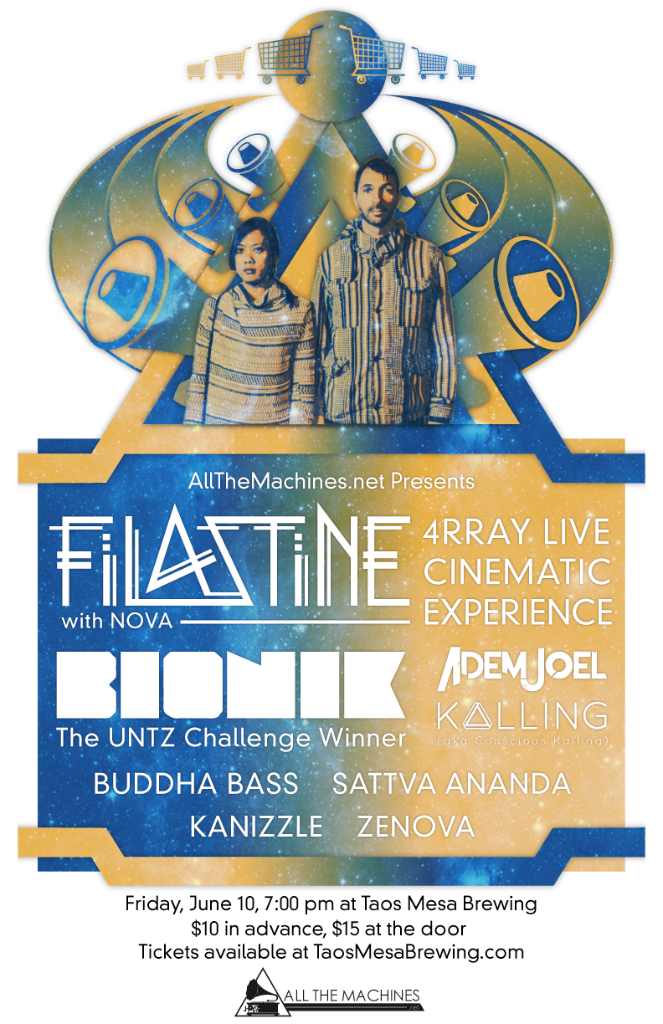