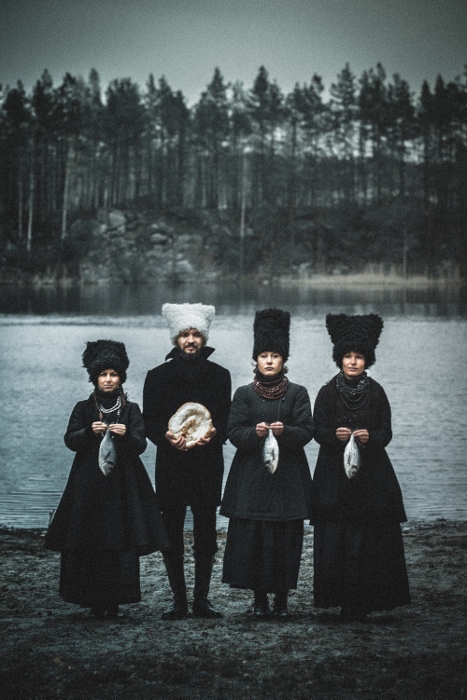 Maybe you’re thinking about going to the DakhaBrakha show on Tuesday, December 2, at Taos Mesa Brewing, but you’re not sure. Maybe you’ve heard they’re weird. Maybe someone has told you that they know DakhaBraka is from Ukraine and the women in the band wear crazy black hats, but that’s about it. Well, let me tell you all you really need to know about DakhaBrakha: You don’t need to know anything about them. Not one thing. All you have to do is go. And you should. You may never again get a chance to see anything like the irresistible, wonderful sublime genius of DakhaBrakha.

I could skip right now to the ticket and time details and we’d be done. However, if for some reason you don’t trust me, or you don’t know that if it’s a Roots and Wires Presents show it has to be great, I’ll give you more.

Some de rigueur details. DakhaBrakha is Marko Halanevych, Iryna Kovalenko, Olena Tsibulska and Nina Garenetska. They got together through their mutual association with the Dakh Contemporary Art Center in Kiev. All four members sing and play multiple instruments. The list of instruments is a long one, some you may recognize, others you surely won’t. In alphabetical order: accordion, bass drum, bugay, cello, darbuka, didjeridoo, djembe, garmoshka, harmonica, piano, tabla, trombone, zagaleyka.

Their sound is predominantly percussive and vocal, but the other instruments, particularly Garenetska’s cello, are critical to the DakhaBrakha sound. The band calls their style of music “ethnic chaos.” At first listen it may seem like a musical bouillabaisse that has boiled over and into the borscht pot and then to the floor. But once you get your bearings, you recognize the brilliantly choreographed orchestration. Every single note sung, banged, plucked, bowed, fingered or warbled has the weight of a word in a Haiku or a Dorothy Parker one-liner. At times the sound is brooding and intense, other times it’s spritely and blissful. 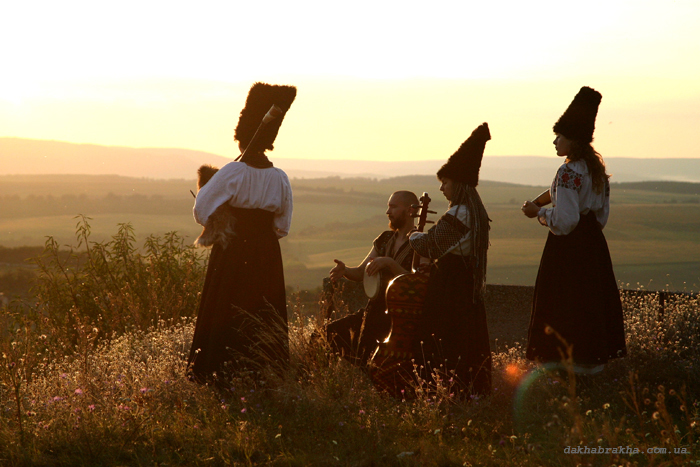 Halanevych’s vocal range goes into uncharted territory. He can take his voice to almost any spot on the register. Frequently he’s near the top of it. I wouldn’t call it a Brian Wilson falsetto; it’s more like a sparrow that speaks and sings Ukrainian. He can also make the most beautiful nonsense musical sounds with his voice.

Kovalenko, Tsibulska and Garenetska exhibit an infectious joy in their work, and the music benefits from it. Somehow, not being able to understand a single word they sing makes it even better. They’re usually dressed in white dresses and their trademark black hats. Not that it matters, but they’re also beautiful. 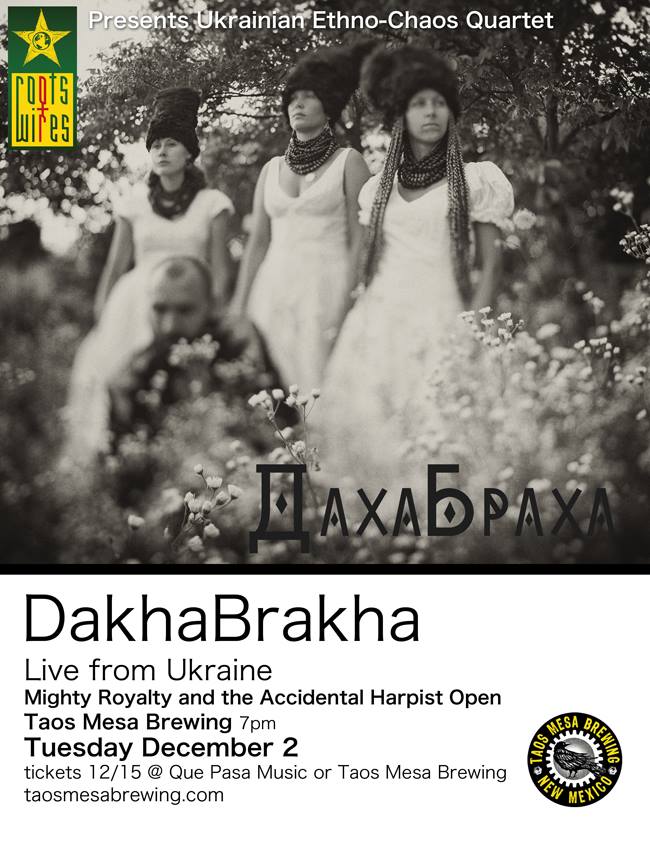 The overall effect is entrancing. They pull you in. You may feel confused or lost at first, but if your experience is anything like mine, you won’t want to find your way through it or out of it. You’ll let them take you everywhere they go, and you’ll enjoy every second.

DakhaBrakha, which means give and take in Ukrainian, plays the Taos Mesa Brewing Company on Tuesday, December 2. Doors open 7:00 p.m. Advanced tickets are $12 at Qué Pasa Music and Taos Mesa Brewing. For a few bucks more you can buy them online at taosmesabrewing.com. They’re $15 the day of the show. Get on it early, they’re selling out in Albuquerque.

Taos’ own Mighty Royalty and the Accidental Harpist open. This is an all ages show.