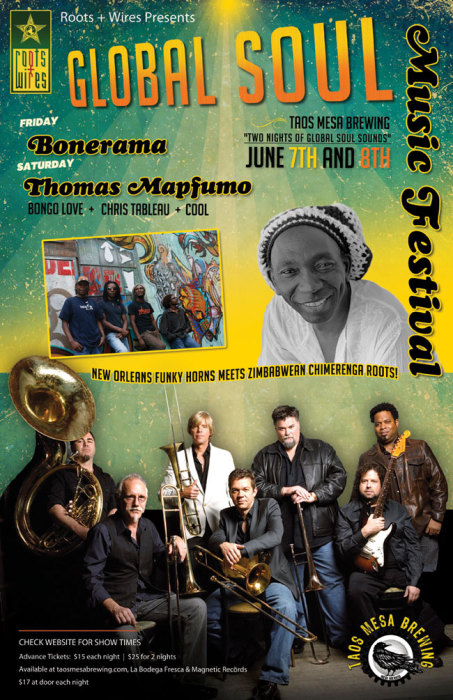 On Thursday, I had the opportunity to catch up with founding Bonerama members Mark Mullins and Craig Klein. Brass-funk-rock, multi-genre-multi-bone band Bonerama is now headed in our general direction, on tour promoting their new album Shake It Baby. The band’s sixth album, it has some really special guests on it – including Dr. John, George Porter Jr., Mike Hill from REM, and Mike Dillon from Les Claypool on percussion.

These guys are all veteran musicians, and by all accounts they put on a hell of a show. They’ll be here playing Taos Mesa Brewing on Friday night, as part of Roots + Wires’ two-day Global Soul Music Festival (I hope all the incoming Mumfordites are smart enough to stick around for a full weekend of great music!).

It’s been a few years since Bonerama was out in our corner of the world – they last played in New Mexico in 2008, they think, and it might have been Taos, or maybe Albuquerque, they can’t really recall (spoken like musicians who’ve been playing the road together for more than twenty years — Taos, Albuquerque, who can remember?).

When we spoke, Mark was in Columbus, OH, getting their van ready for the tour, and Craig called in from back home in New Orleans. Let’s skip the standard band-bio stuff (that’s why God made Wikipedia) — except to clarify that, yes, this band does in fact feature not one not two but three trombonists (plus bass, guitar, and drums), and yes, that is a marvelous thing — and get right on down to it.

LiveTaos: So where is this tour taking you?

MARK: We’re starting in Wilmington, DE; then DC on Saturday and Baltimore Sunday; then we come your way, and play Friday in Taos. Then we do Colorado for almost a week — we’re doing a cool show the Sunday after our Taos show, in Denver, for a thing called Water for People. It’s an international organization about healthy drinking water, a free concert out in Civic Center. We’re playing with a great band called The Motet.

LT: Actually, I’ve read about a couple of benefit-style shows you’ve done over the years. Is that something you gravitate towards? I mean, do you think of yourselves as being a socially-conscious band?

CRAIG: We never really thought of ourselves as socially-conscious until after the flood, when you didn’t have a choice but to be that way. Then we hooked up with some activist organizations — Air Traffic Control in SF, Future of Music Coalition in DC, both deal with issues that affect musicians and artists directly – either through Capitol Hill or in day to day life, and what can be done to help out. We like doing things like that. But we didn’t plan it, it just kinda happened.

LT: Anything in particular you’re looking forward to about coming back to the Southwest?

MARK: For New Orleans bands, it can be 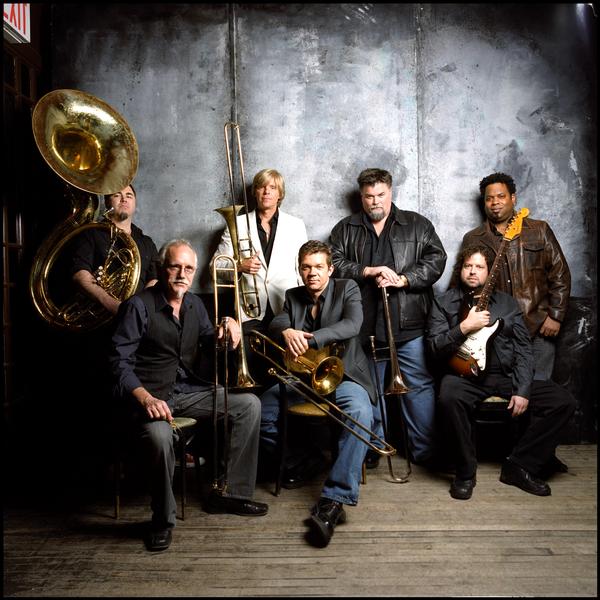 challenging to get there because of the distance. Lately we’ve been staying close, and we just got through some pretty big festivals – French Quarter, Jazzfest. We keep talking about getting out towards the West.

CRAIG: We’re really looking forward to seeing the people, meeting some new friends — we both traveled with Harry Connick Jr. for years, and that part of the country is full of warm and friendly people. We’re trying to become a better band every day. Maybe we’re better now since last time we were there, and we’re excited to meet some new people.

LT: Do you have a favorite tour venue — a place you always play on the road?

CRAIG: Honestly, my favorite places to play are in New Orleans — no offense! But it’s really nice to be out playing music, traveling, turning people on to our music, exposing them to something they may not be familiar with. We love being around big music meccas, but it’s great to be in small places with real music fans.

LT: Speaking of what you do — what with the three trombones — are there any trombone-player stereotypes you can share with us?

CRAIG: (Laughing) You opened up a big door there.

MARK: The trombone is the butt of so many jokes in musician land. But where we come from it’s kinda different, because there are so many great bone players. It’s a different thing here. Craig had the idea to put this group together – 15 years ago – and one thing we discussed was to put the bone up front, and feature multiple trombones, and we realized we could play almost any kind of music we felt like – funk, rock, New Orleans – it just becomes music after a while, whatever kind of music that is. Good music. It’s fun to put the trombone up front and play all kinds of things, including throwing some covers in there that people know – they can’t believe they’re hearing it through the trombone. We’re trying to be a better band all the time, but we wanna be having a lot of fun at the same time. 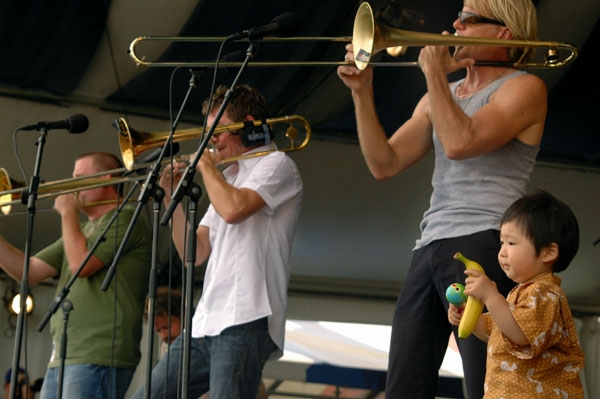 CRAIG: The trombone has risen up a couple notches, so now you see Trombone Shorty, Big Sam[‘s Funky Nation] — lot of bands, especially bands out of New Orleans, there’s lots of heavy trombone-sounding bands. We played Tipitina’s the other night, and the band before us, Stooge’s Brass Band, had three trombones. Maybe the trombone is stepping up to the front a little bit.

LT: Logistically, how does touring work for you? Six grown men and three trombones in one van can’t always be easy.

MARK: Generally we all pile into the van — it’s a Sprinter van, so, in between a passenger van and a tour bus — and you’re right, it’s not always easy. But those two hours when you’re playing, and seeing people have a good time… after watching your fellow band mates do all kinds of stuff in the van, suddenly they’re doing stuff on stage that you can’t believe – and there’s this renewed respect.

LT: Final question: if you could tour with any band, past or present, who would it be?

MARK: There are so many. I mean really the answer is Led Zeppelin with Louis Armstrong and the Bonerama horns.

MARK: (Laughing) Yeah. That would be a hell of a show.

BONERAMA at the Global Soul Music Festival
Friday, June 7th, Taos Mesa Brewing
Doors at 6pm
$25 adv. for both nights/$15 adv. for 1 night/$17 at the door each night

All photos borrowed from the internet. Thanks, internet!