Red’s Lounge, the quintessential Mississippi Blues juke joint, is a thousand miles and worlds away from the Taos County Juvenile Detention Center; but on June 14th, the disparate locales connect briefly at the Taos Mesa Brewing Company for the Blues, Brews and Bikes festival at Taos Mesa Brewing. Roots and Wires and Taos Mesa Brewing are producing the festival for the benefit of the Freedom in Music Project, an organization that brings hope to at-risk and detained New Mexico youth through music.

In December 2013, the Freedom in Music Project made a modest donation of four classical guitars, tuners, music stands, books and picks to the juvenile detention center in Taos. With the benefits of the festival, FMP programs will grow in Taos and other parts of the state.

Headlining the event is Robert “Bilbo” Walker, a regular at Red’s Lounge in Clarksdale, Miss., the heart of the Mississippi Delta blues world. Also making the trip from Clarksdale is Big A, the Juke Joint All Star. 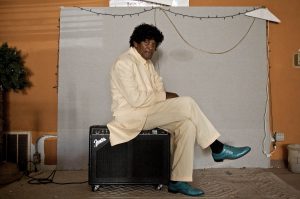 Walker started playing blues guitar in Mississippi juke joints when he was 12. For years he has been commuting 2,000 miles to his monthly gigs at Red’s from his farm in Bakersfield, Calif. He’s now 77 and his high-energy stage show would exhaust men half his age. His suits are long and flashy. His shoes are sleek and buffed. And then there’s the hair. Walker is also known for his ability to play the guitar one-handed.

Big A, Anthony Sherrod, is Walker’s son-in-law and played with Walker in Taos in 2013, but this year the multi-instrumentalist is playing his own set. Big A plays Red’s every week, sometimes twice, and is featured in the documentary “We Juke up in Here,” for which he wrote and performed the theme song.

The Blues, Brews and Bike Festival’s musicians will be the first to play on Taos Mesa Brewing’s new earthshippy outdoor amphitheater.

The Freedom in Music Project program at the Taos detention center is small spuds compared to the earlier programs FMP started at the New Mexico Youth Diagnostic and Development Center and the Bernalillo County Detention Center. FMP’s goal is to raise $300,000 to establish programs in as many of New Mexico’s 29 juvenile detention facilities as possible, with a priority on all 15 long-term youth detention centers. If you think 29 and 15 are big numbers for our state of just over two million people, you’re dead on.

Yes, there will be beer. Lots of it. Sixteen of New Mexico’s finest breweries will be pouring samples of their brew. 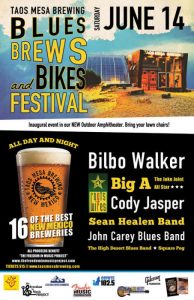 Oliveira added the bike element because the riding in Taos is beautiful, and it’s a good way to get people from all over to come to the festival. Although he doesn’t ride anymore, Oliveira still has a connection to motorcycles. The Hellfighters, a Christian bike club in Rio Rancho that takes to the street to help the homeless and addicts, will be helping in any way possible at the festival.

This is an all-ages event. If you want to imbibe, bring your ID. Bringing a lawn chair is a good idea. The festival runs from noon until 11:45 P.M. That date again is Saturday, June 14th.

The joint will be jukin’. Guaranteed.