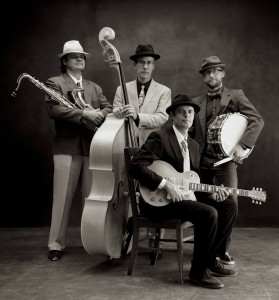 Beginning this Wednesday (January 29th), everyone’s favorite local swing and jump blues band will be coming to you live every week out at Taos Mesa Brewing. From 5:30 – 8:30 every Wednesday night for the indefinite future, catch this free show, with free swing dancing instructions.

We caught up with the boys in the band to ask everything you need to know to prepare for this Wednesday night tradition.

It’s worth noting that each musician was emailed the below questions separately, with instructions to answer each in six words or less. While the guitarist more or less adhered to that structure, the bass player and saxophonist pretty much completely ignored the rules and did whatever they wanted. Meanwhile, the drummer answered each question in exactly six words.

I guess drummers can count past four, after all.

What’s the last book you read?

What’s your non-musical hobby of choice?

Would you rather sleep with Fidel Castro or Alan Greenspan?

CONRAD: Can’t I have a manwitch with them both?

JEREMY: Castro, if you’re going to switch teams you may as well go for staying power.

But seriously, how many musicians does it take to screw in a lightbulb?

CONRAD: No, musicians don’t screw in lightbulbs.  Musicians screw in the back of vans.

JEREMY: No light bulbs for the musicians please.  You don’t want to see the sausage getting made.

What was your dream profession as a child?

JEREMY: I wanted to be an evangelical preacher.

What historical figure do you believe you most emulate?

JEREMY: Well, I believe that I most emulate Plato, but I have no rational evidence of this.

What’s your favorite episode of Buffy the Vampire Slayer?

JACKSON: The one with that dork.

JEREMY: The one where there’s this vampire, and then Buffy slays it.

MAX: Which ones include Jackson? Those episodes.

Why suits and ties?

JACKSON: Our sophisticated audience expects that.

CONRAD: Because we look so goddamn sexy in them.

JEREMY: Suits and ties can make psycho killers and investment bankers look like upstanding citizens, so maybe it will work for musicians too.

JACKSON: Richard Gere — I have a mouse infestation.

CONRAD: You mean, which one do I get to kick out of an airlock?  Both, please.

MAX: Either, just don’t include a rodent. 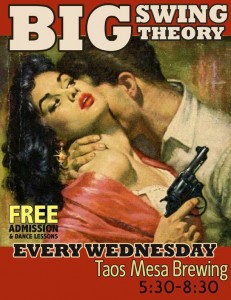