A Musical Journey Into a Time Warp

Mr. Whoopy, set the way-back machine for 1980, San Francisco California. It was over 35 years ago when the Sex Pistols declared there was “No Future” and asked the question “Ever felt like you’ve been cheated?” They and many other groups began to jar some of us loose from the mind-crippling banality of groups like ELO, Fleetwood Mac, and Journey. Like boomtown rats in the dark, people began to find each other. Misfits, mutants, the damned and banshees of all types came together to dance and perform orchestral maneuvers in the dark. With stiff little fingers rock and roll was being saved from a pitiful death at the hands of mediocrity and was brought back to where it belonged, to anybody who wanted do it. It wasn’t about talent, it was about attitude and social courage.

The English kids knew what was going on — they had Maggie Thatcher swatting their knuckles with a ruler and creating austere conditions for everyone but the rich and powerful, sound familiar? The cry went out, “to the barricades” and street riots once again gave homage to Guy Fawkes. (Check out the Filth and the Fury for a little background:)

Ah, but like infectious germs it somehow had to be spread. Waking people up to the great rock and roll swindle would not be easy. They had been sedated by krass commercialism and the actor-who-would-be-king, Ronald Reagan. The black flag of anarchy was raised and people began to create their own world of creative expression. A new order was forming in the Bauhaus where people dared to be real. So back to spreading diseases — how was it to be spread? Would commercial radio do it? Would Rolling Stone or Spin Magazine do it? Would PBS or NPR do it? Not likely — they would reduce it to pablum, so never mind the bollocks, people would have to do it themselves. DIY was the word and people began to produce their own albums, take over college radio stations all over the country, publish their own magazines, create music venues in warehouses and turn their backs on all the crap that was being thrown at them until they were ready to throw some back.

Time goes on and in the blink of an eye has what was once young and rebellious become old age? Not all can remain forever young like Cid, Darby, Snakefinger, Kurt and so many others. As I turn sixty-two I wanted to find out just how much has changed, so I set the controls for the heart of the sun and journeyed back to where it all pretty much began for me: the San Francisco Bay Area. I called my daughter, Marin, and said I’d like to come out for my birthday. She said they love for me to come out, would I be interested in seeing the Residents and the English Beat? “Without a doubt,” I said.

The Residents have been in the music scene since 1972 and the English Beat were big in the English punk/wave/ska scene in the 1980’s. From 1980 to 1988 I published a music magazine in the Bay Area called BravEar. The English Beat was the first band I ever interviewed and was covered in the first issue of BravEar, under the title “the Jam, the Clash and the English Beat.” The magazine was dedicated to covering the range of music, politics, and articles about historical individuals and movements. There were extensive record and live reviews in which the Residents were covered several times.

With daughter Marin and son-in-law Patrick, we set out for the Rio Theatre in Santa Cruz. Once arriving in the theater I am immediately confronted by a big hippie in tie-dyed overalls who must think I’m a musician or something because he’s telling me about his recording studio, giving me his card and inviting me out to “come out and lay down some tracks.” Getting the impression that there was some degree of delusion going on, we move quickly to find a seat.

As the Residents come on stage the theater is about half full. A large blowup array of candy canes, snowmen, and elves form the backdrop, to create a minimal Resident stage setting. The front man, dressed as a bad Santa, stomps back and forth in a ranting, overly-stimulated style recounting the history of the Residents in song and narrative. All the while the computer operator and the guitar player, dressed face-to-toe in black with bright red dreads, play the sound track to their bizarre story. Absent on stage was the drummer — I guess in the new digital music world, who needs a drummer anyway?

Not knowing what is theater and what is real, one wonders, has the front man really lost his train of thought staring into the distance? Did he really walk off the stage never to return until the member with the computer goes and gets him? Is that all just part of the show? Methinks so. That is how I would characterize a Residents show: never being sure what is real and what is theatre.

By the end of the show the blowup set begins to collapse, creating an image of a Santa’s Village gone derelict. The grand finale of the show was the great iconic eyeball with top hat rising atop a large blow up white Christmas tree, towering over the stage with the members of the band standing at attention, saluting the monument.

The Residents have been much more than just a live performance group, and their extensive video work may best describe what the they are really all about. They are truly a mystery wrapped in an enigma wrapped in a flour tortilla. Since they came to San Francisco in 1972 from New Orleans, who the members are has always been a well guarded secret.  However now, if one really wants to dig on YouTube, it is possible to see the people behind the facade. They originally got their name from their demo tapes being returned to them from a record label, addressed to “the residents.” They then started their own label called Ralph Records. To attempt to describe a Residents show beyond this point is not something I am able to do. Fortunately, in the world we now live in we have the advantage of the internet, so here are a few links where you can experience the Residents yourself. I dare you:

The next night it is off to San Francisco, Bimbos, and the English Beat. 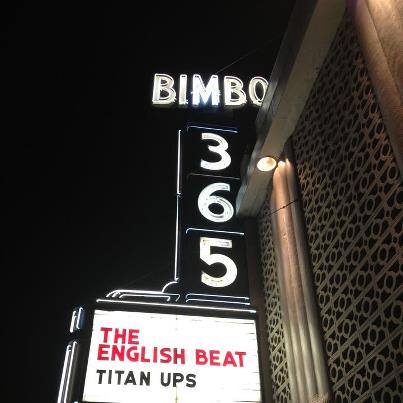 After spending the day in Japan Town, drinking Sake and looking at everything kawaii in the shops, we catch a cab to North Beach and the infamous Bimbos night club. While in the cab we had a great conversation with the driver about the current music scene. Music always changes but never dies. Arriving at Bimbos we make our way to the bar for a couple cocktails, and then on to the floor and the front of the crowd stage left. The first band on stage was the Titan Up, a 12-member Ska/Reggae band. I couldn’t help wondering how much each person in the band and crew must be making. They put their all into it, and got everyone up and ready for the headliners.

When the English Beat came on stage, they began with “Twist and Crawl.” The excitement went through the crowd like a swarm of bees. We all did our part finding those near us in the crowd who were full of energy to expand the space so we all could dance. I had interviewed Dave Wakeling twice, once in 1981 when they were opening for The Clash in San Francisco, and again in 1983 at the US festival. I remember him as being a very unpretentious, articulate and friendly person. For a band of their international notoriety to grant an interview to someone like myself for a magazine which didn’t even exist yet left me with the impression that they were sincerely coming from their radical roots in England. They covered all their hits, from “Mirror in the Bathroom” to “Save it For Later.” The band was very tight, and though I am not really into bands regrouping and coming back on their old reputation I really did enjoy hearing their music again live. “I like it, I can dance to it, therefore it’s good.”

After the show we jumped into a Crown Vic town car, a bit more expensive than a cab but it was available right then. The driver was from Pakistan and it turned out Patrick went to law school with a friend of his — a small world, even in San Francisco. There is always an interesting conversation to be had with SF cabbies and drivers. We got back to Japan Town about 1 AM and walked around trying to find where we parked to the car. Eventually, after several attempts, we found the entrance and level to where the car was parked. Now all we had to do was get from San Francisco to Aptos, south of Santa Cruz.

The next day was about recovery, Chinese food, and hanging at the Bay Bar and Grill in Capitola with my good friend Sputnik, and Marin and Patrick. Sunday some of my old best friends and other daughter Kyle came down to the Aptos for a little party. Monday was a blur and Tuesday, Drizzle, drazzle, druzzle, drome; time for zis one to come home.

Bringing back only a cold and much to reflect upon, the homage to the past seemed to be over. But was it ever really over? When I first moved to the Southwest I was trying to find out what happened to the Whitefronts. They were a band in San Francisco that BravEar had done an article on, and we were all fans. They moved to the Southwest in 1987. Whenever I met anyone in music, here and in Santa Fe, I would ask them if they had ever heard of the Whitefronts. For ten years, I never got an affirmative. Returning to Taos, I recently went to the Mesa Brewery to see Spindrift. Outside I saw someone playing a tuba and marching around. It reminded me of the Whitefronts so once again I asked, “Have you ever heard of the Whitefronts?” He pointed inside and said, “They are inside, they are now the Art of Flying.” Such a small world, especially when you are in Taos.

So, is there a time warp? Does anyone really get older? Do things actually change with time? It is very subjective. Besides the fact that we are terminal and for us personally it will all come to an end, it is all illusion and the universe is as we choose to see it. In my experience, nothing really changes except that there is just more music to listen to and there are more things we don’t want to do anymore because there is always something new to do.