Roots and Wires Presents, Walking Rain Productions, and Like A Boss Productions have been bringing some seriously badass music to Taos recently, and this Wednesday and Thursday nights are no exception. I asked John Henderson of Roots and Wires presents to give us a sneak peak of what to expect.

This Wednesday night, May 4 at Taos Mesa Brewing: Turkuaz, a Brooklyn based funk band, hits the stage with special guest Fruition. This will be their Taos debut.

From their website: Turkuaz is a 9-piece “Powerfunk” outfit from Brooklyn, NY, whose modern take on the classic funk sound has established them as leaders in the funk revolution that’s currently taking place in the genre. Blending elements of Pop, R&B, and Soul with their distinct aggressive funk core, Turkuaz sounds like the musical love child of Sly & the Family Stone and Talking Heads. With a playful feel that evokes the best of 80s dance music, Turkuaz’s tightly arranged songs are built on thick grooves, driven by powerhouse rhythm and horn sections, as well as four distinct vocalists.

Henderson says, “If people like other bands we have brought like The Motet and Orgone, the Turkuaz is the same speed.”

Here’s just a small taste of what this jammin’ band can do:

Fruition takes the stage the same night. The group has more of an Americana vibe that folks who are salivating about the upcoming Music on the Mesa festival will love.

From their website: The first time they ever made music together, Fruition’s three lead singer/songwriters discovered that their voices naturally blended into stunning three-part harmony. Eight years after that impromptu busking session, the Portland, Oregon-based quintet has grown from a rootsy, string-centric outfit to a full-fledged rock band with an easy but powerful grasp of soul, blues, and British Invasion era pop:

Tickets for these two powerhouse bands are only $10.

Thursday night, May 5, the party keeps going with JJ Grey and Mofro, with special guests KOA.

From their website: KOA is a seven-piece group from Nashville that mashes soul, rock & roll and funk into an eclectic, danceable sound:

Henderson has a special spot in his heart for JJ Grey and Mofro:

“Mofro’s first album (before it was JJ Grey and Mofro), Blackwater, is one of my all time favorites. It’s raw, rootsy and has a real rural, roadhouse feel to it.”

From their website: From the days of playing greasy local juke joints to headlining major festivals, JJ Grey remains an unfettered, blissful performer, singing with a blue-collared spirit over the bone-deep grooves of his compositions. His presence before an audience is something startling and immediate, at times a funk rave-up, other times a sort of mass-absolution for the mortal weaknesses that make him and his audience human. When you see JJ Grey and his band Mofro live—and you truly, absolutely must—the man is fearless.

Tickets for Thursday night are $25, BUT if you want to go see both shows it’s only $30 for the pair. That’s a sweet deal to chase away those midweek blues. Also, advance three-day passes for Music on the Mesa will be available for only $99!

When I asked how this stellar combination of grooves and blues came about, John told me, “Walking Rain already had Fruition and JJ Grey & Mofro booked for separate shows, and then Roots and Wires Presents got the availability for Turkuaz. I just threw it out to Stephen about putting it all together and said ‘Let’s make it a party.’

“Roots and Wires Presents, Walking Rain Productions, and Like A Boss Productions are all on the same page as far as bringing music to Taos — it’s a labor of love. We all want to bring the community together and have fun. That has been the Roots and Wires mission from the start, for almost twenty years, and it’s nice to work with other promoters in Taos who have the same mindset.”
My response: Hells yes! We’ll see you out there, Taos. 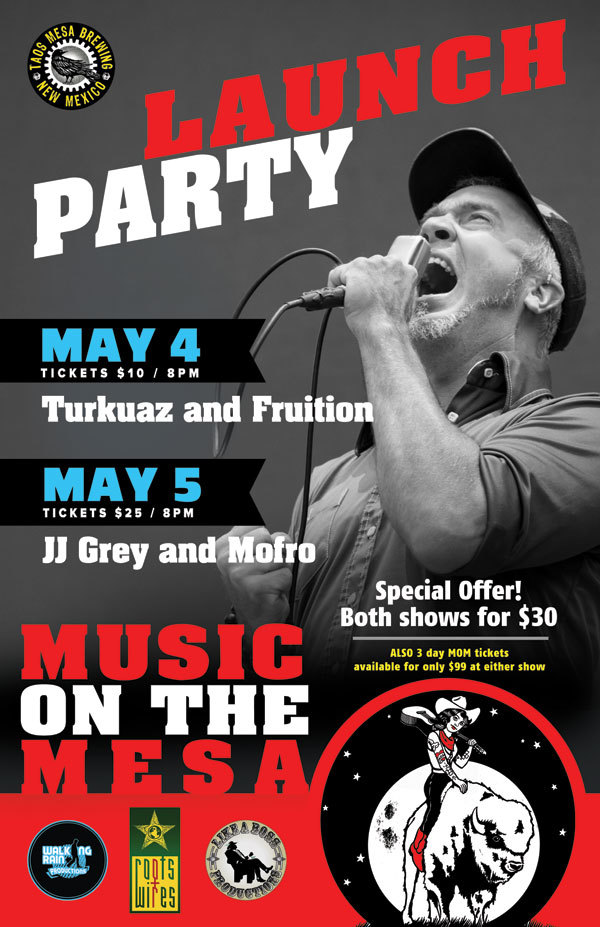