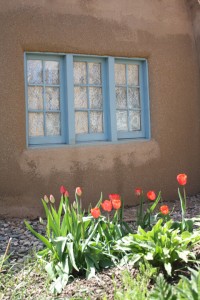 The first thing that strikes me about the Ernest L. Blumenschein Home and Museum, or “The Blumy,” as some locals call it, is how authentic it feels. The presence of the family’s furnishings and objects makes one feel as though they’ve just stepped out for a walk in the neighborhood and will be returning shortly. As a matter of fact, it feels so cozy that I wish I could stay awhile and visit with the family, perhaps be invited for lunch and talk about art. There’s wood in the fireplaces, books in the library, and neatly made beds. Even the kitchen has dry goods from the period sitting on the shelves — perhaps not original to the family, but it certainly adds to the authenticity.

Tucked away on beautiful Ledoux Street, this home is where E.L. Blumenschein lived with his wife, Mary Shepherd Greene and their daughter, Helen. Blumenschein happened to be one of the artists in the famed broken carriage wheel incident that helped launch Taos into the art colony it still is today. The original four rooms were purchased in 1919, and the family continued to acquire rooms throughout 1931. Parts of the home were built as early as 1797, making it some of the oldest surviving architecture in Taos. The family did extensive remodeling: you can see Mary’s influence throughout, with custom built-in furniture, murals on the walls, and even a false fireplace – the intent of which was to hide a hot water heater. Scattered throughout, you can also view photographs taken in the home, which show the original furnishings as they were when the family lived here. There are also exhibits that feature some of the family’s personal effects, which only adds to the intimacy.

There is a good collection of art hanging on the walls – not only paintings by Ernest and Mary, but also the work of their friends and contemporaries, such as Joseph Sharp, Doel Reed, and Bert Phillips. It’s worth it to spend a little extra time absorbing pieces that literally paint a picture of Taos. One of the rooms, Ernest’s painting studio, features rotating exhibits as well, allowing the museum to show a wider range of art. This room is large and bright, perfectly suited for painting, and features a massive fireplace at one end; a replica of one that originally stood in this room, but was removed by Ernest so he could have more wall space.

It can be very inspiring to see how one family, a family of artists, lived during the early 20th century in Taos. Without modern conveniences, there were a lot of challenges, but it was also a simpler time. There were fewer possessions and fewer frills. Free time was spent playing music, reading books, or painting. The home beautifully illustrates this simplicity, and it can make one yearn for a time less occupied by the technology of today. I found myself wanting to live like they did; in a quiet adobe, without television or smartphones, spending my time in the creation of art.

This museum is a treasure for anyone interested in the history, and more specifically, the art history of Taos. It tells the story of the people and events that made Taos nationally known, while immersing you in their lives. Allow yourself enough time to explore, the home is surprisingly large and there is much art to appreciate.

The Blumenschein is part of the Taos Historic Museums. Visit their website for more information on admission and visiting hours.  www.taoshistoricmuseums.org