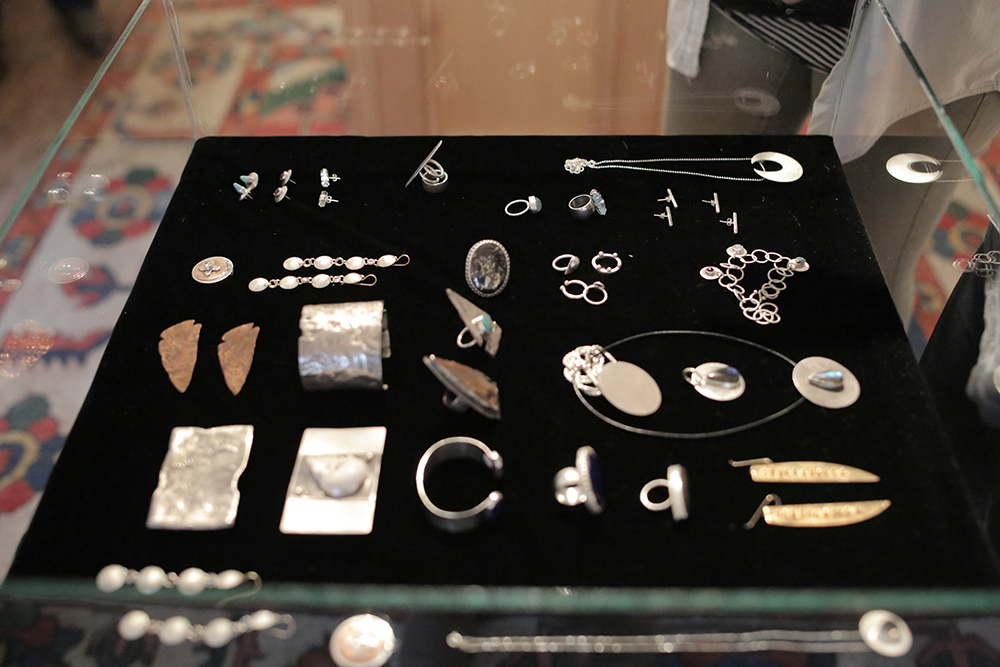 Moriah Stanton’s stunning jewelry is the centerpiece of MoMo, her new gallery

The blue dusk of August 5th watched the rain fall on Bent St. Beneath the charcoal colored clouds, rain coats bustled under the white awning. Laughter crested and splashed and hands emerged filled with cups of wine. Head after head ducked into MoMo Taos for the first time. Inside, hair still curling from the dampness, we found ourselves held in the hospitable aesthetic of Moriah Stanton. Outside, through the paned windows, the red MoMo Taos sign glistened. 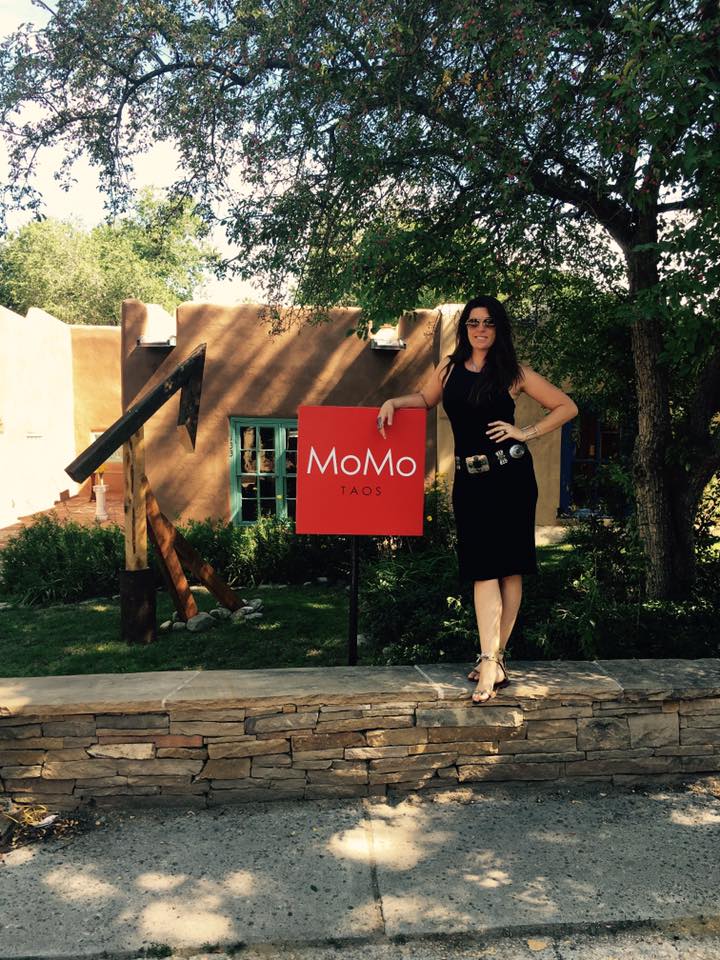 The owner outside MoMo (Photo courtesy of Moriah Stanton)

Four weeks earlier, Moriah stood in 133 Bent Street holding the keys. She had no logo, no money, and no plan other than the images of a gallery that had been percolating in her head for years. “This place fell into my lap,” she said. And now she’s committed to her path of least resistance, committed to remaining open, to giving herself the freedom to react. After all, as those who live in Taos inevitably learn, the path of least resistance can get you the furthest.

Her reason for opening MoMo is simple: “I’ve always wanted to have a place where people could come to find beautiful things curated by me. I want to offer up beautiful things.” And Moriah is present in this deeply personal collection, which features her own work, as well as that of her brother, mentor and friends. MoMo is a small, brave, gallery—deeply rooted in the Taos community but squirrely enough to fit that ever-changing current. Encased in glass, Moriah’s silverwork glistens above the warm red carpets. Stones cut in refreshingly counter-intuitive shapes show their natural beauty against black mounting. Warm yet stately, foreign yet familiar; MoMo Taos has the air of a woman who never looks out of place.

Currently showing two burgeoning local artists, Moriah intends to keep that focus alive, “I want to turn other people onto the artists I think are great,” she said as she studied paintings by Eli Walters and pottery by Rachel Donner.

Eli Walters, 24, quit his day job to pursue a day-and-night painting career in his Cabot Plaza studio. “It’s a good time for this,” he said as we talked about Taos’ latest mushroom in creativity. Eli paints both figures and landscapes with an almost eerie, western-gothic feel. “I was listening to Blood Meridian when I prepared for the show,” he said, “maybe that’s why they turned out that way!” When I prodded Eli about the purpose, stakes, and meaning of his paintings he quoted Tom Dixon: “I just want to make a painting.” With his paintings, as with his fly-by-night sign-making gig, he just wants to make something beautiful for people to look at. 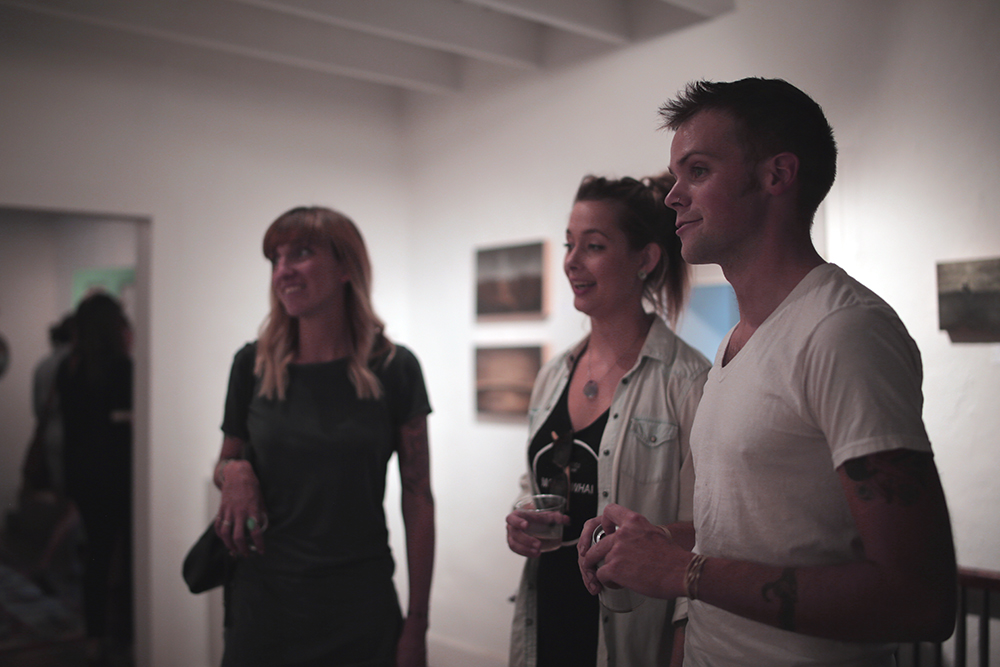 Walters and friends at the MoMo opening

Rachel Donner, 25, grew up in Taos. After attending the University of Northern Colorado for ceramics, she moved back to Taos where she met Moriah. Now living in Santa Fe, she crafts functional porcelain ware made to withstand everyday use. The colorful layers of geometric designs create patterns that are both structured and free.

MoMo intends to be not only a gallery, but also a place where the local artist community can come to interact, expound, and share stories. A sommelier and a 20-year veteran of the hospitality industry, Moriah plans to host monthly events; a Sunday “MoMosa” open house, and some seasonal popup dinners are in the works. 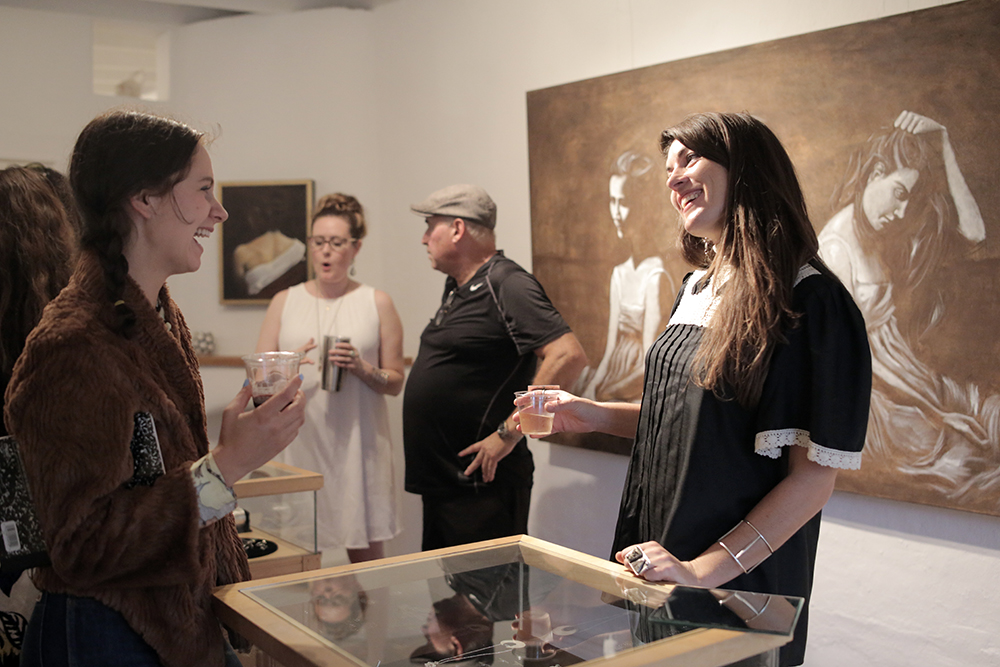