Growing up in a small town isn’t always easy, and no one knows that better than Colleen. After she tried – and failed – to find her own way out, her family must try to find a new way forward.

The debut full-length play by award-winning local teacher and poet Ned Dougherty, “Escape Plans” is an original American drama. Inspired by the realism of growing up in Taos, “Escape Plans” explores the pressures small-town teens face growing up and following the family legacy. Walking in the footsteps of the past only perpetuates every challenge and heartache faced by previous generations, so forging a new path might be the only way out. And that trail doesn’t always lead very far from home. 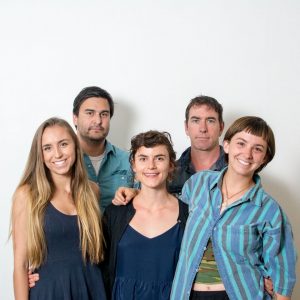 The cast of Escape Plans, opening Wednesday at Metta Theatre

“As a high school teacher here for the last 8 years, I’ve seen students disappear, drop out, tackle the Ivy League, become parents, give up, never quit, you name it,” says Dougherty. “I honor these young people because they often succeed despite, rather than because of, the adult influences in their lives. I hope “Escape Plans” is a way for our community to come to terms with what young adulthood means in our tiny home. What it means to thrive. What it means to be yourself. What it means to support the next generation.”

“Ned and I had been talking about producing some one acts he’d written, but when I saw an early draft of ‘Escape Plans,’ I knew it was the play we needed do,” says Rita O’Connell, director. “This play has something to say that feels especially relevant right now, and I’m so grateful to be able to share this new work with our community.”

“Escape Plans” opens at Metta Theatre on Wednesday, June 29, and runs through Sunday, July 3. Wednesday – Sunday performances are at 7:30pm, plus a 2:30pm Saturday matinee.