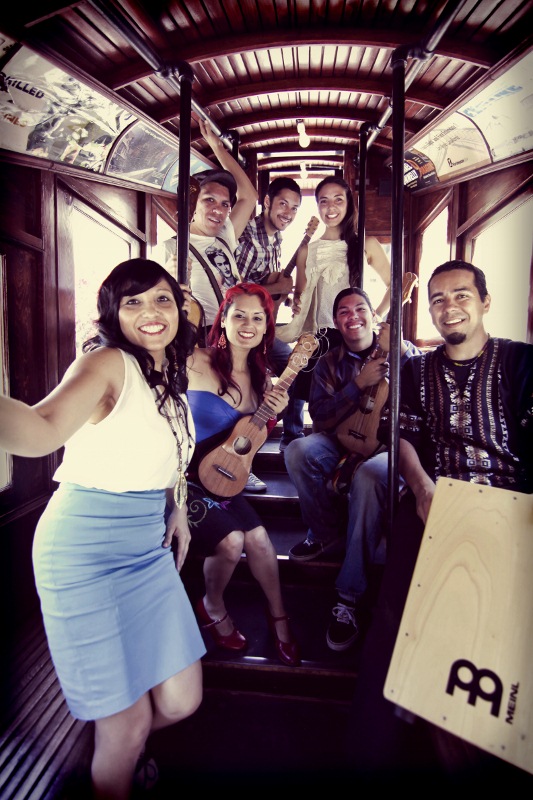 It’s safe to say when most people think of East L.A., they think of a predominantly Latino neighborhood. The truth is, it’s even more homogenous than that. According to the U.S. Census—which compiles data on the neighborhood—Latinos make up over 97% of the population. It’s the least ethnically diverse neighborhood in Los Angeles County.

The members of East L.A. band Las Cafeteras know that homogeneity is nothing more than a statistic that says nothing about the diversity of the Latino community itself. The Las Cafeteras sound is a mashup of traditional Veracruz Son Jaracho,  Afro-Mexican rhythms, rock, cumbia, punk and hip-hop, all sounds that live and breathe in East L.A. Their sound has as many criss-crosses and offramps as the L.A freeway system. They’ve reworked standards like La Bamba and Woody Guthrie’s “This Land is Your Land.” They’ve performed with Latino artists Juanes and Ozomatli, and acts as divergent as Rage Against the Machine’s Zach de la Rocha, Brooklyn rapper Talib Kweli and the Los Angeles Philharmonic.

Las Cafeteras is four men and three women, all Mexican Americans, who, with one exception, were born and raised in East L.A. or neighborhoods close to it. Between the seven of them, they make their music with a variety of string instruments, including a West African kalimba as a bass, a Peruvian cajon, a flute, a harmonica, a donkey jaw bone, tap dancing on a wooden box (zapateado) and even a glockenspiel.

Before they had an official name, they were simply referred to as “that band from the cafe.” That’s the Eastside Cafe,  a well known space rooted in community activism and the Zapatista movement. Their lyrics, which typically address the struggles of La Raza, racism, social equality and political protest, were seeded in the time they spent at the cafe. Vocalist Hector Flores has said they sing in five languages: English, Spanish, Spanglish, justice and love.

Roots and Wires brings Las Cafeteras and their sense of social justice to Taos Mesa Brewing on Wednesday, October 14 in a benefit for Community Against Violence. If you didn’t know it already, October is Domestic Violence Awareness Month.

Las Cafeteras: Wednesday October 14
Doors at 7 and sol sound system start at 7
Las Cafeteras go on at 8. Tickets $10 at the door only