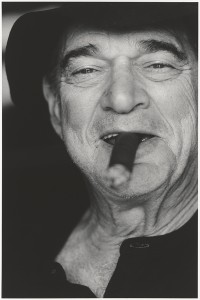 Opening on Saturday July 5, 2014 at David Anthony Fine Art (DAFA) in Taos, Larry Bell will exhibit a rarely shown series of collages on canvas created in the aftermath of September 11, 2001.

In Taos, we know Larry as one of our own internationally acclaimed artists. Earlier this year, Larry returned home from London after a sold-out exhibition at the White Cube. Shortly afterward, he was in São Paulo, Brazil with another successful show. DAFA welcomes Mr. Bell back to the Taos gallery scene after a long absence with this rare exhibit.

After more than 50 years of art making, Mr. Bell continues to to explore the boundaries of light and space in art, pushing our perceptions of art and emotion to new places. This show is no different.

“9/11 and the Time Machine” was created more than a decade ago, with materials collected from New Mexico, and was drawn from the perceptual and emotional surrealism of that time. The works remind us of the mirage of images piled upon one another. It reminds us of the everyday, the horrifying, the oddity, and the reflection of ourselves in the images and the events that took place. 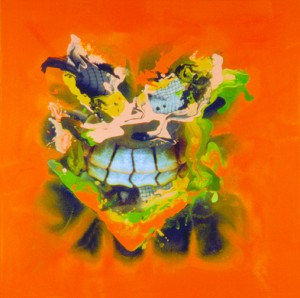 The series, which began with a different intention prior to events on September 11th, according to Mr. Bell, “became the color of the fireballs I saw as the events took place. The fragments of papers floating through the air became the collage elements and the strange imagery that is seen in the works. The acrid greenish color of the dust and detritus in the air became part of the imagery also. My work became totally driven by the imagery and emotion of the incident and was totally emotional and intuitive.“

The collages are paired with the Time Machine, an installation of a reclaimed experiment from Los Alamos Laboratories, that compresses reflected and transmitted light so a reflected image is superimposed on whatever is transmitted through the glass of the sculpture. To Mr. Bell it suggests “the compression of the materials of the buildings on the casualties inside the structures as if the people had become parts of a flat collage.”

The Time Machine and the collages create the emotional and surreal experiences that event. Mr. Bell adds, “I like these works only because they are so totally honest.”  They are on exhibit for only the second time in more than a decade. 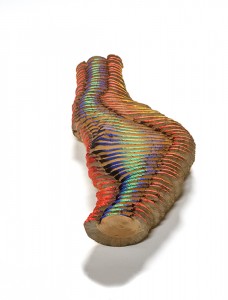 Concurrently showing during Mr. Bell’s summer exhibition will be abstract works by Cody Riddle.  Another Taos artist, Cody has exhibited several times at the Harwood Museum of Art and was part of a 50-year retrospective of abstract expressionism at Hulse-Warmen Gallery in 2010.  New painted works by Riddle will be available, along with sculptural wall mounted works of vibrantly painted, ingeniously sliced branches of Pinõn.  At first look one is struck with the beauty of the organic sculptures, followed immediately by wonderment at how the work was accomplished.