What’s New in The World? J-Pop-K-Pop

For quite some time now music has become international in its audience and its appeal. With youtube and other online music sources, it is easy to get a sense of what is going on in far-away places that one would never be able to experience otherwise. It may only be like looking at the moon with binoculars, but it does give enough detail to know it is not cheese.

Building on large emerging youth cultures with access to the rest of the world, both Japan and Korea have been able to create and support musical styles which take in influences from outside, reflect their culture, and send it back out to share with a world of music lovers. J-Pop and K-Pop is usually sung in their language, with some English phrases thrown in. Without understanding the lyrics one can avoid thinking about dysfunctional relationships, or boring personal stories of why someone is so screwed up and unhappy. With Rock and Roll one generally doesn’t know what the hell they are saying anyway and who cares, it’s Rock and Roll.

Much of Japanese and Korean pop is made up of ‘girl’ and ‘boy’ groups of three to eight members — rarely are they mixed, with a few exceptions. They have well-choreographed dance routines with a good beat that you can dance to, they wear amazing fashions, and, whether live or video, they are generally very well produced. J-pop and K-pop are fairly different but complement one another, fitting together well in the same playlist.

Rather than repressing pop music, the government now sees it as a means of being recognized as a modern nation and they are selling it like cars. Music has become a major industry in Korea, building on the Disney model: binding contracts are signed with children as young as 9 or 10, to be molded into professional performer — like our Britney Spears, Justin Timberlake, and Christina Aguilera, who were all Mouseketeers.

Trainees live together in a tightly-regulated environments, and spend many hours a day learning music, choreography, and foreign languages as well as communication techniques with fans and journalists. Maybe a bit disturbing, but then, how do people get to the Olympics or become ballet dancers?  K-Pop is much more homogenous, and has a laser focus on breaking into the mainstream of international pop music.

In 2011 the MTV Iggy Award went to 2NE1 as the best new group in the world. K-Pop has become the 8th-largest digital market in the world, and is very popular in places like South America, Mexico, Turkey, parts of the Middle East, and India. K-pop has gotten a lot of interest from the American pop music world. Artists like Kanye West, Ludacris, will.i.am, Snoop Dog and Britney Spears have been working with many groups from Korea, producing some of their music and bringing them into American pop circles.

K-Pop is criticized for not being original, shallow in character which copies and plagiarizes western music — so, what else is new in pop music? Do you ever really hear anything original at the Grammys? When K-Pop makes it to the Grammys that will be original enough for America. The ghost of Michael Jackson is all over Korea, and if you like dancing to songs like “Billy Jean” and “Beat It” K-Pop groups like G.NA, 2NE1, BigBang, Girls Generation and 4Minute will take you there. I would love to hear it being played by DJs in Taos, but besides Psy’s “Gangnam Style,” we will probably have to wait a few years before that ever happens.

J-Pop is more like Dr. Who’s phone booth: just looks like a regular phone booth from the outside, but when one enters it is so much larger and can take you anywhere in time and space. After weeks of researching J-Pop and J-Rock I feel like I have only scratched the surface. The variety of musical styles in overwhelming. Music that spans hundreds of years done with traditional instruments like the Shamisen and sung in Kabuki style as well as jazz, swing, romantic ballads and styles adapted from the West and interpreted for a japanese ear.

Japanese society has always been very conservative–the individual is expected to be respectful, and not stand out. As in the case of such societies, a strong desire emerges within some people to break out of the social constraints and express their individuality. Everything changes. 40 years ago women weren’t allowed to wear pants, today parents want the kids to wear t-shirts and jeans. (For more information on fashion, see my previous article on Kabuki, Harajuku and Kyary Pamyu Pamyu). In this youtube clip we can see a 16 year old Kyary Pamyu Pamyu at home with her parents.

I mention fashion because fashion and music as well as anime and manga are very interwoven in Japan. Music and social change movements are always accompanied by new fashion. From Lennon to Mao to Elvis, the Beatles, hippies, punks, you name it, fashion sets the stage for social change.

J-Pop styles in music run an extreme range from ultra kawaii (cute) girl groups like Tempera Kids, perfume, Kyary Pamyu Pamyu, Visual kei bands like Detox, Alice 9, Malice Miser, D’espairsray, An Cafe, the GazettE, and everything in between and beyond. Dressing to the max understates what is going on in the Japanese music scene. There are many styles which people adopt: Fairy Kei, Decora, Goth Lolita, Punk, Guaru-ho (hip hop yankee), Visual Kei — and everything can be mixed.

Most widespread in the music scene is Visual Kei. Visual Kei is a style involving dramatic dress with extreme makeup and wild theatrical movement. It’s almost impossible to tell if someone is male or female, it is very upscale androgyny but no doubt about it, male or female they look very Hot-Hot-Hot. This may go back to Kabuki, where all female characters were played by men. It is sometimes referred to as a musical form but it is not — it is a fashion style adopted by many bands, especially male rock and goth bands.

When it comes to Visual Kei fashion bands, none have been more influential and responsible than Malice Miser for the evolution of the style. Malice Miser formed in 1992 with members coming out of progressive rock and gothic rock backgrounds with a strong classical music influence. Over the years they had several changes in front singers. At the end of 2001, the band took an indefinite hiatus and went of in different directions. Many musical spinoffs came out of Malice Miser and their influence on all forms of rock and gothic rock is unquestionable.

Today two of the biggest music groups in Japan are the aforementioned Kyara Pamyu Pamyu and the GazettE. Kyara, pop star and model has just returned from her first world tour playing to sold out audiences in Los Angeles, New York, Brussels, Paris, London, Korea, Taiwan, Hong Kong, Singapore and throughout Japan. The number one rock band in Japan is the GazettE. They formed as a five member band in January 2002; in 2003, Kai replaced Yune as drummer and became leader of the band. The band has maintained the same line up to the present.

GazettE’s music is Considered alternative metal, alternative rock, nu metal and metalcore. They are Visual Kei in the style and attitude. They have put out 7 albums, 2 compilations, 6 EPs and many singles. They have also done extensive touring in Japan and around the world. They are scheduled for a world tour and release of new material in the fall of 2013. Their tour will include performances in Mexico, Chile, Argentina, Brazil. Then Europe, two shows in France, two in Germany and one in Finland.

Over the weeks I have been exploring J-Pop and K-Pop I have come across so many different groups and genres that I have hardly touched on the subject. Fortunately for me as a writer, I don’t have to describe it all. Fortunately for you, the serious music lover (I assume you are because you’ve gotten this far in the article), I can give you links so you can hear and see for yourself. From sites these links take you to you can judge for yourself. You will also find hundreds of other links which lead to other links and on and on.

So don’t take my word for any of this — find out for yourself. You may find in a land far far away you can hear music. 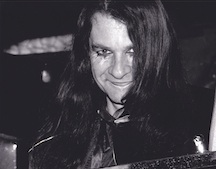 The author in the 90s, during his goth days