Bram Stoker would be proud. The Taos High School Drama Department has created a full production of his masterwork, Dracula, which is both faithful to the story and boldly brings it into the 21st century. 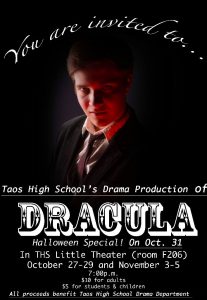 Adam Overley runs the Taos High Drama Department on his own, without any other faculty support. He and the students involved in this production of Dracula have done a lot on a tight budget, including period costumes, sets, make-up, and props. Under Overley’s direction, this cast of eight Taos High School students brings this classic tale to life. Moreover, from their warm-up to the closing curtain, these students show tremendous enthusiasm and respect for the craft of acting.

You know the story — poor Mina has died at Count Dracula’s hand, and Lucy is starting to show signs of the same fate. However, Lucy’s family and betrothed, Jonathan Harker, do not understand these symptoms by rational terms (why are the regular blood transfusions not doing the trick?). Her family is at a loss as to how to help her, until Professor Van Helsing shows up. Together, they save Lucy by driving a stake through Dracula’s plans to steal her soul.

But this version is fresh and very present tense, performed by today’s youth with spirited exactitude. The play is going up with two casts; in the cast I saw, Maya Johann plays a stunning Lucy, and Ian Tosta, her ever well-meaning fiancé, Jonathan. Vicente Jeantete, who plays Count Dracula, renders him both as charming and as spooky as he is, through slowing his speech and ruthlessly going after what he wants. Josephine Huesers provides comic relief as Renfield’s guard, Butterworth, and Zoey Birdsong plays both the dutifulness and deviousness of the servant, Ms. Wells, well.

Best of all, this production features gender-blind casting, where three strong actresses play female versions of roles originally written for males: Julianne Moyer offers a strong, concerned mother figure for Lucy (originally written as the father figure); Christianna Torres simultaneously portrays madness and cunning as Renfield; and Sydney Roth anchors the plot with lucid planning for Dracula’s downfall as Professor Van Helsing. These young actors are handling a lot of text with aplomb, delivering several powerful moments in the play which glues us to our seats. They, along with the tech crew, present a cohesive, enjoyable show.

And, little wonder — the Taos High Drama Department is like family. Christianna, who has been performing with Taos High Drama for four years and is now a senior, had this to say: “Adam’s an amazing director, and he doesn’t put us down. He trusts us. Here, you can play pretend, and no one judges you.” Maya concurred, adding: “In theatre, you can change characters, get into your characters as much as you want, and no one can say, ‘you’re being too dramatic.'” Plus, Overley commented, “It’s a fun show that people will want to come out and see this time of year.” Clearly, the ensemble has put a lot of effort into this production and is looking forward to showcasing it to the community.

Now, imagine if as many fans filled the seats at our high school drama performances as those at high school athletic events. Then these youth, too, would know the deep support our community has for them expressing their innate talents. Let’s make it a point to celebrate the artistic tendencies in our youth as well.

If you’re looking for an eerie performance perfect for this time of year, don’t miss Taos High’s Dracula. But don’t be too scared — as Van Helsing puts it so eloquently in the play, “The power of all evil things ceases with the coming of day.”

Performances are held in the TAos High School Little Theater.

Tickets are $10 for Adults and $5 for Students. All proceeds benefit the Taos High School Drama Department.