An inside look at the current offering from Taos’ newest theatre company, by a first-time production assistant

Ten weeks ago I met Jim Hatch, director of Odenbear Theatre’s presentation of Andrew Bovell’s Speaking in Tongues. I wanted to help with the production, offering no prior experience or relatable skills. Hatch had me along for the ride; I got cast as his assistant.

On opening weekend, I sit alone in the Mural Room in the Old County Court House visualizing each scene, each light and sound cue, each time a prop is introduced or taken away. Seems silly now. There are so few props. I have nothing to do with light and sound apart from noting when they don’t happen correctly. Even so, I sit in silence and visualize the entire play because I’m new to all this.

Leon (Richard Ebbs) interrogates John (Jason Pfeifer) alongside a session between therapist, Valerie (Irene Loy) and her client, Sarah (Jane Ayles). Scenes weave in and out of each other. At times, four individual monologues run parallel at full speed to reveal events leading up to a murder. Some art is made to amuse. Some is made to dig in where it hurts. Bovell’s piece does both.

The themes of the play aren’t new. It’s how this story unfolds that is imaginative. For the audience, it’s a thrill. An intellectual treat. For me and the crew, it’s complex. So I sit under the frescoes and run it in my head.

The door to the outside world opens. Light dumps in. Hatch is here. We discuss the timing of the taiko drum between scenes. We put down glow tape and adjust a light. I sweep bits of dirt from the floor. The actors arrive. The chatter begins.

House doors open. Actors are closed into the green room. I put stools in place and ready the bar glasses for Scene Three. Back to the green room to give the actors a five minute warning. Jason Pfeifer is looking at his script. Jane Ayles is putting on her flats. Irene Loy sips English tea that Jane brought. I don’t see Richard Ebbs. Maybe he’s changing around the corner. I have to talk to him about the stool.

I turn back out and step up to the tech booth to ask Eric St. John (sound designer) if the length of the taiko drum has been extended on page 81. He says yes. I go back to the green room, give the actors two minutes, though, I know that it might be one or four. We’d like this to run like clockwork, but it doesn’t.

Hatch nods from across the room. I haven’t discussed the stool with Ebbs. Oh well. House lights off. Places. Lights go blue. Taiko drums. The actors slink out of their lair like tigers on a hunt. They’re off to seduce, to betray, to kill.

I sit with my head bent over the script in a dark corner, silently cheering them on.

I’m nervous on opening night and every night after that. For what, I’m not sure. I get to sit behind the black board with the tech crew. But I’m so nervous I can hardly breath. Jane, Richard, Irene and Jason seem excited. Poised. Ready for action. Hatch is his usual. I guess it’s just me.

I think back to three weeks ago. We rehearsed in a room with dark blue walls and ceiling. Night after night the actors trudged down into characters. Recessed lighting flickered overhead, casting shadows below their eyes. The room closed in on us like a cave. It’s like we were digging into the ground with spoons, trying to un-earth something. Or chasing an invisible dragon.

A few days before the opening of the show, Loy and Pfeifer rehearsed a scene where Pete (Jane’s husband) has just returned home to find Jane (Pete’s wife) dancing by herself—something she never does. The tension between the couple builds. The air changes in the stuffy blue room. I get chills down my arms. The walls expand. Nothing else exists except the energy between Jane and Pete. Hatch has tears in his eyes. So do I. Not because the scene is sad, because they caught the invisible creature.

Night after night in the mural room we have moments like that.

After more than one hundred hours of using spoons to dig out something in an ill-lit cavern, we have a show that, (if you’ll let me write unabashedly, ignoring my personal connection to the production):

Leaves audiences limping home with love and lust on their minds.

A bleak reminder of what people are capable of doing to each other.

Come and see for yourself. 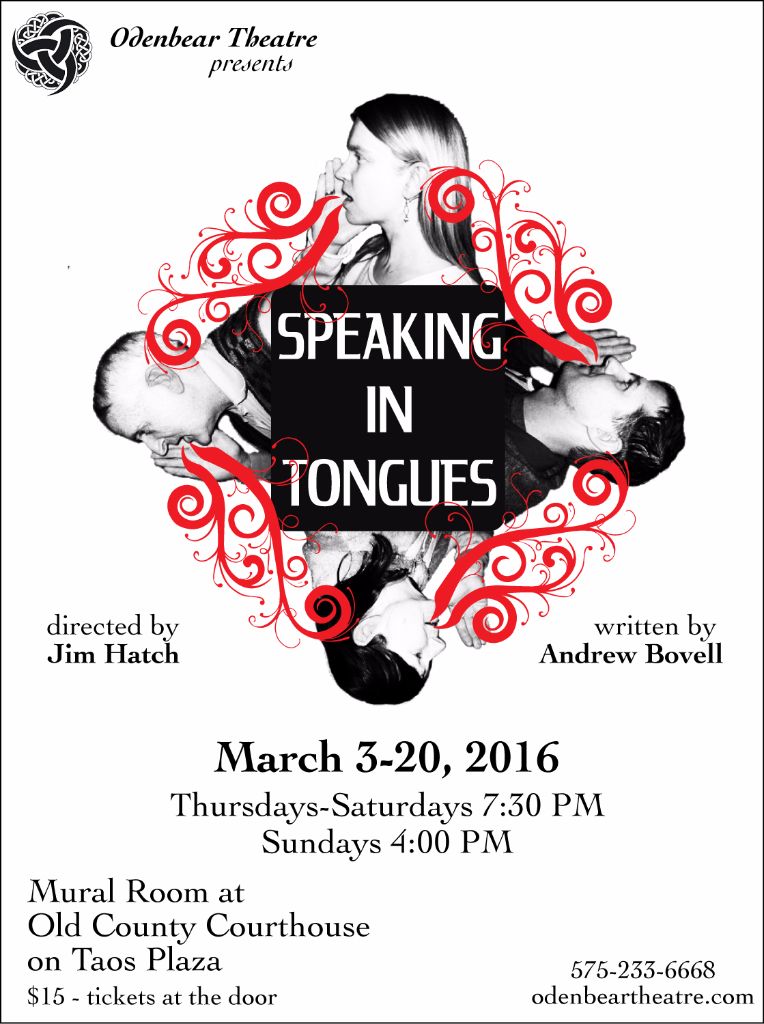