The sound of the North Mississippi Hill Country is coming to the mountains of Northern New Mexico. Reverend John Wilkins brings his special blues-gospel style to Arroyo Seco for a free show on Wednesday, June 8. The show, produced by Seco Live and Roots + Wires, is part of Seco Live’s Celebrate Seco! series of free concerts on the stage at Scott Carlson Pottery in the heart of Arroyo Seco.

Reverend John Wilkins was born and raised just over the state line in Memphis, but the North Mississippi Hill Country is in his blood. His father, the influential bluesman and later blues-gospelman Reverend Robert Wilkins (the Rolling Stones recorded his song Prodigal Son on their album Beggar’s Banquet), is from Hernando, Miss., and his mother is from Holly Springs.

Wilkins started playing guitar in church alongside his father in the late 1940’s, when he was only five. At age 14, his remarkable guitar skills got him recruited by a blues band on its way to New Orleans. When his mother found out the band didn’t play gospel, she cancelled her young son’s travel plans.

Wilkins played and recorded with blues artist like O.V. Wright and as a member of the M&N Gospel Singers. There was a time when he would play blues in juke joints on Friday and Saturday nights and gospel in church on Sundays. Like his father, he heard the calling, and in 1985 became, and still is, pastor at Hunter Chapel in Como, Miss. When he’s in the pulpit, Wilkins leaves his guitar in its case and lets others do the playing.

“I’ve got musicians that I taught,” Wilkins tells me with a little chuckle.

His musical style today is gospel lyrics over a masterful blues guitar base. On stage, he’s flanked by his band and his three daughters, who sing backup.

“We’re gonna give you a good time,” Wilkins assures me.

Memphis is still home for Wilkins, but every Sunday he drives 50 miles south to Como. It’s a much longer drive to Arroyo Seco, where he’ll play one show then head directly back to Memphis. He’s making the trip just for us.

“You know the best way to get there from Memphis?” Wilkins asks me.

When I tell him I’ve never made the drive before he assures me he’ll find us. 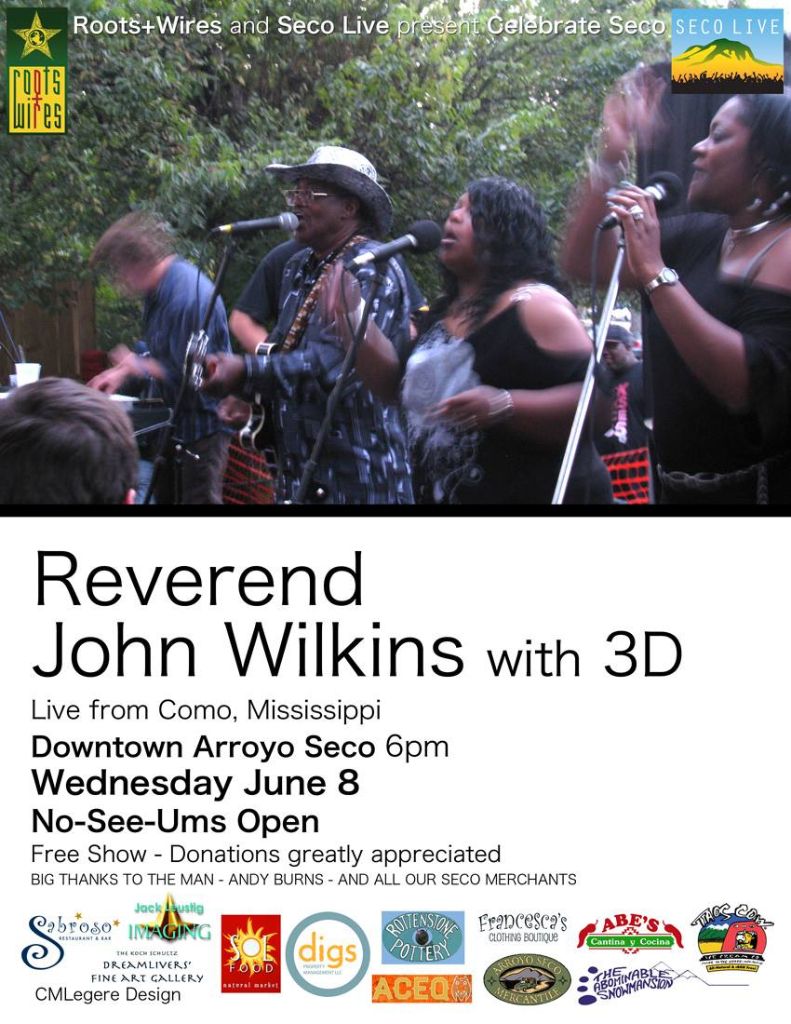 Seco Live is a 501c3 non-profit dedicated to bringing live music and the arts to the Village of Arroyo Seco and all of Taos. The shows are free but donations are greatly appreciated.