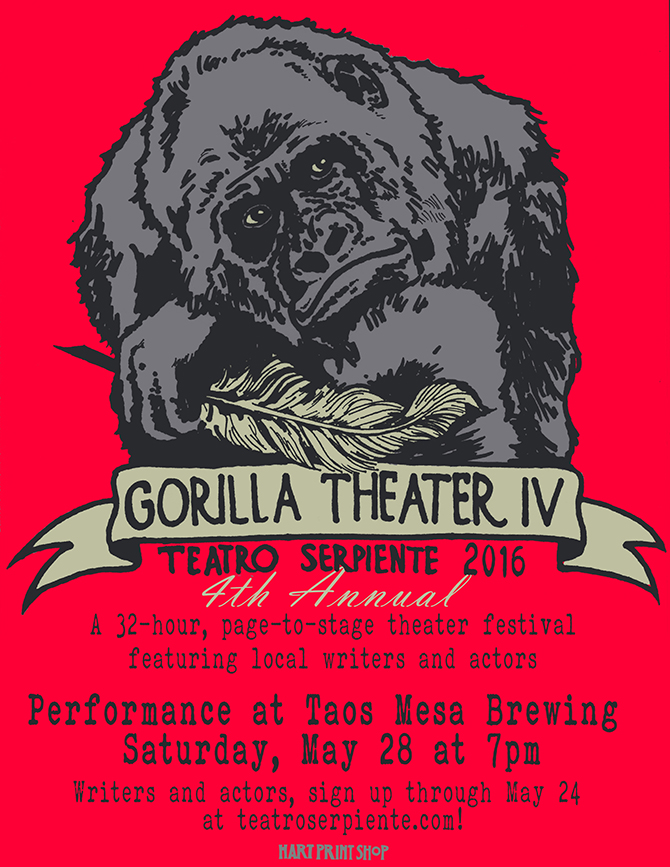 Local theater company Teatro Serpiente likes to shake things up. From launching annual outdoor summer Shakespeare in Taos (original goal: help us rescue Shakespeare from the stuffy English parlor and bring back the whole raucous, bawdy, vegetable-throwing affair!) to their original live sitcom Gorilla Romance, which took the stage monthly at Taos Mesa Brewing for two full seasons, they’re always looking for ways to combine theater + community, shake it all up, and drink the delicious draught that results.

The Gorilla Theater Festival is probably the best example of that particular concoction. A 32-hour page-to-stage theater festival, Gorilla Theater brings local writers and local actors together to create brand-new productions in just over a day and a half. Writers and actors are encouraged to sign up through May 25 — no prior experience is required, just enthusiasm and a willingness to commit fully for the duration of the process.

Here’s how it works: the Teatro Serpiente core company gets together on Thursday night, and randomly (yes, literally by drawing from a hat) assigns casts, prompts, and props to each writer. For context: last year, the prompt theme was “common pairs” (milk and cookies, coat and tails, birds and bees), and the prop to be used in every play was a key. In 2014, the prompt theme was “Man vs.” (vs. nature, technology, himself), and the props were a mixed bag (sword, cowboy hat, bag of recycling). The point is to give the writers just enough for a jumping off point, without telling them exactly what to do.

Friday morning, the writers all get together over coffee and breakfast and receive their instructions — then they’re set loose for 24 hours to create brand-new scripts. Half will create flash 5 minute scenes, half short (10-minute) one acts. All will have sweaty palms at some point. The creative process thrives in a pressure cooker.

By 9am Saturday morning, the writers throw down their pens and send in their scripts. The Teatro crew scrambles to print and prep by 11am, when actors walk in the door of Taos Mesa Brewing, with snacks and sunscreen and ready for a challenging day of creating the freshest theater imaginable. At 7:00pm Saturday night, the shows go up on the mainstage.

The audience will witness 10 – 12 brand-new scenes, curated and hosted by the writing/performing team of Ned Dougherty and Rita O’Connell.

For the writers and actors, it’s an exciting marathon of firing up creative engines and not sweating the small stuff — because there’s simply no time. For the audience, it’s an opportunity to see what happens when new and old regional talent alike are crammed into an awkward time-space continuum and forced to make the best of it. Sure, there will be moments when actors go up on their lines and chaos ensues; but there will also be indescribably exciting moments of witnessing shiny new art in the making.

Actors and writers come not only from Taos, but Santa Fe, Los Alamos, and sometimes even farther afield. This festival is gathering steam. Don’t miss it.