In the cool adobe confines of their downtown home Marissa Macias and Lauren Green were asking themselves if it was time to leave Taos. They were asking themselves the questions every seasoned Taoseña has asked; What am I doing here? Should I leave? Is the mountain kicking me out? Where might I go next? During their three years in Taos, both women had unearthed individual creative talents and turned those talents into jobs that pay the bills. Lauren as a carpenter and musician, Marissa as a textile artist and personal curator, both of them bending a knee to paint, plaster, and pick up projects to make ends meet. Their individual projects, although satisfying, pulled them away from Taos; Marissa traveling for curatorial projects and Lauren going on tour with her band. “We really needed some way to ground down creatively in our community,” said Lauren, “some way to bring our capacities together, and root it in the community.” One night around midnight, the phone rang. It was musician and friend Awna Teixeira, wondering if they wanted to rent out a plaza-side, gallery and work space at the foot of St. Francis church. “There’s only one problem,” said Awna “There’s no second sink.” “What?” they asked, holding the phone closer “Did you say there’s a psychic sink?”

Weeks later, I’m watching Awna juggle a bottle of wine, and a guitar, getting ready to play at the Psychic Sink inaugural event while reflecting on how natural the transition had been. “It came together,” she said, “like things do in Taos. Or, you know,” she added, “things fall horribly apart.” And maybe a little bit of both was required for the birth of a Psychic Sink. 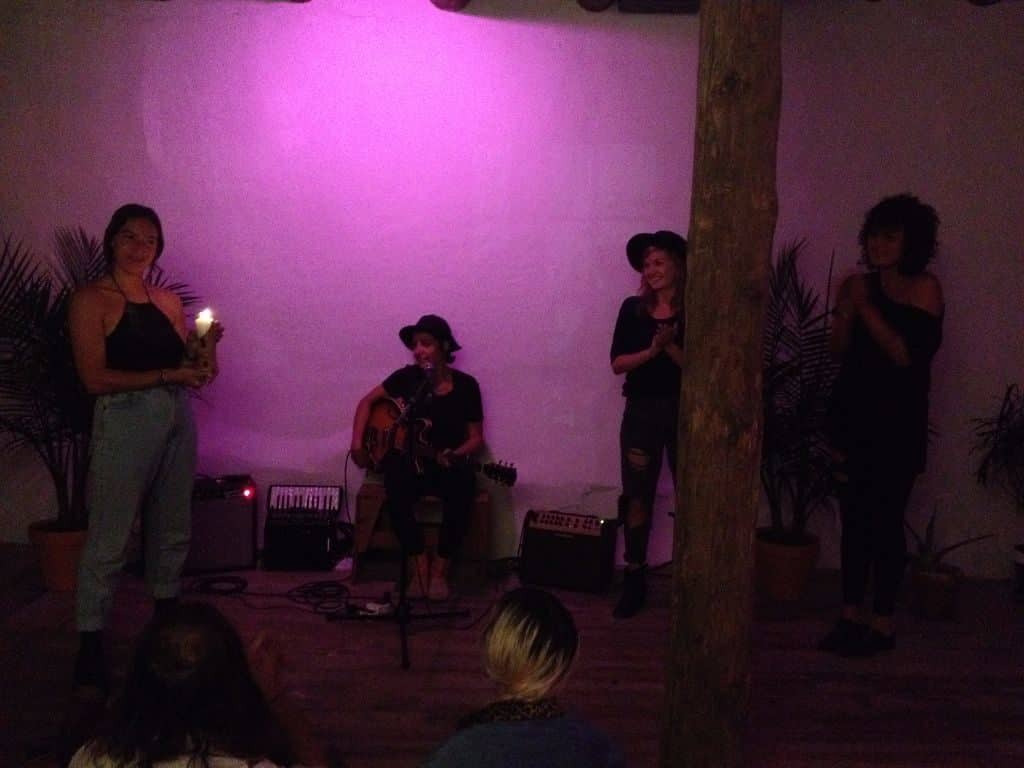 As it begins to darken outside, Awna Teixeira plays a swashbuckling tune, a crooning tune, and every other kind of tune that’s needed to slip calmly into the thread of night. Rae Red, performance artist hailing from Marfa, Texas, uses an overhead projector to pull us into a compelling world of tubs and ghosts and love and the ocean of the way down deep. Marissa and Lauren begin to relax their limbs, stiff from weeding and spattered with paint from the twenty-four hour work bender they had been on to get the place ready in time. Sitting with the soft light on our faces and the warm dark against our backs, we are greeting tragedies and triumphs, falling in and out of love, spending some of the time that seems to burn a hole in the pocket of everyman. Pouring all we’ve got into the Psychic Sink of our lives.

Lauren and Marissa are still settling into their new St. Francis work and event space. And in their settling in, they are settling around. A lot had to come together for these women to inherit a place at the foot of St. Francis church. They know they’re not the first ones here, not even the only ones. Not only have dozens of people occupied and left the space, but some of their spirits remain. Besides their determination to have Psychic Sink events be a microcosm of the many cultures and people that Taos is home to, Lauren and Marissa are making a concerted effort to keep the Taos they love alive through honoring the stories of the community in a biannual publication. “That’s what makes Taos special,” said Marissa “experiencing the landscape and hearing the stories.” The publication will also feature a catalogue of the artists that have been featured at Psychic Sink. They feel excited to be a part of the growing culture of event spaces in Taos, “We’ve got Parse in Seco, and Ennui downtown and now Psychic Sink in Ranchos,” said Marissa, “it’s moving south.”

As Psychic Sink takes shape, the women are certain of one thing: “No sedentary work.” Neither of them wants to get stuck babysitting a gallery, and frankly, they can’t afford to. They’d much rather use the space to work, and to have occasional weekend gift shops in which they intend to showcase other local artists as well as their own work. As an installation gallery they are planning to distinguish themselves not by the frequency of their shows, but by the quality. “We want to distinguish ourselves by our reverence for the artists that come to us,” Marissa reflected, “And part of that is that we’re not going to have patience for uncharted energy.” Luckily for everyone, the opening showed that there is a community who is ready to receive them. The audience was quiet and attentive, and as the crowd filed out, the donations bucket filled, proving that there is a body of people ready to help keep this kind of art alive in Taos. “It’s a beautiful opportunity,” said Marissa, “We see it, and we’re working hard for it.” 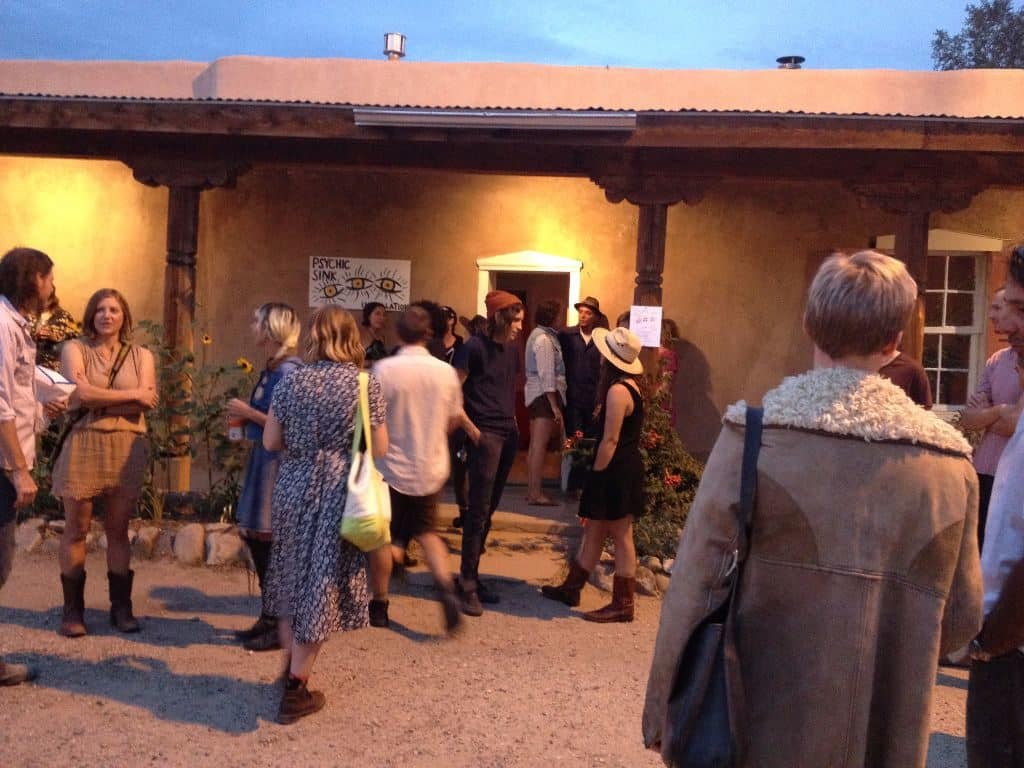 On the horizon: Lauren and Marissa are working on creating a botanical sound space which explores the relationship between, human, plant and musical frequencies. And they are looking forward to a week long residency and workshops when Rachel Burgos of snakeroot apothecary comes to town.

Pending the addition of a landline “hotline” you can keep abreast of Psychic Sink events by following their Instagrams (lrngrnlostgrapes and moonlightfeels) or e-mailing at Psi-jacuzziacid.com

All Photos by Hannah Westly