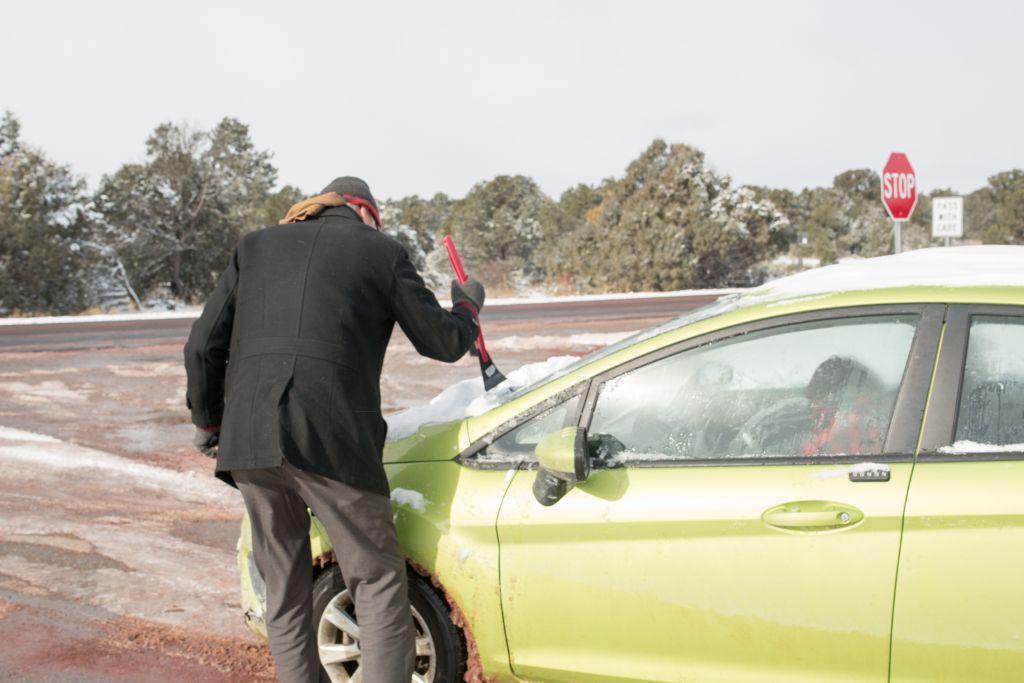 “No gas, no brakes, you’re doing great,” David Costanza says as Liz Neely masterfully steers Gimlet, her lime-green Ford Fiesta, out of her first official Taos Winter Skid on Highway 64. We’re headed to Ojo Caliente to have tea and treats with artist John DePuy, and come hell, high water, or significant overnight snowfall and unplowed morning roads, we will not be stopped.

Our excursion on this snowy December morning is a somewhat meta media exercise. Liz Neely, curator for the Harwood Museum, and David Costanza, pastry chef, musician, writer, and Harwood preparator, have launched a new podcast and photoblog called Art + Tea (say “art plus tea”). I’m tagging along to document the making of Episode Four. The nature of writing and photoblogging about the making of a podcast and photoblog means there are more cameras and recording devices in the car than there are people – but the company is excellent, the views are gorgeous, and tea with homemade tarts is on our horizon. All told, not bad for a Tuesday morning. 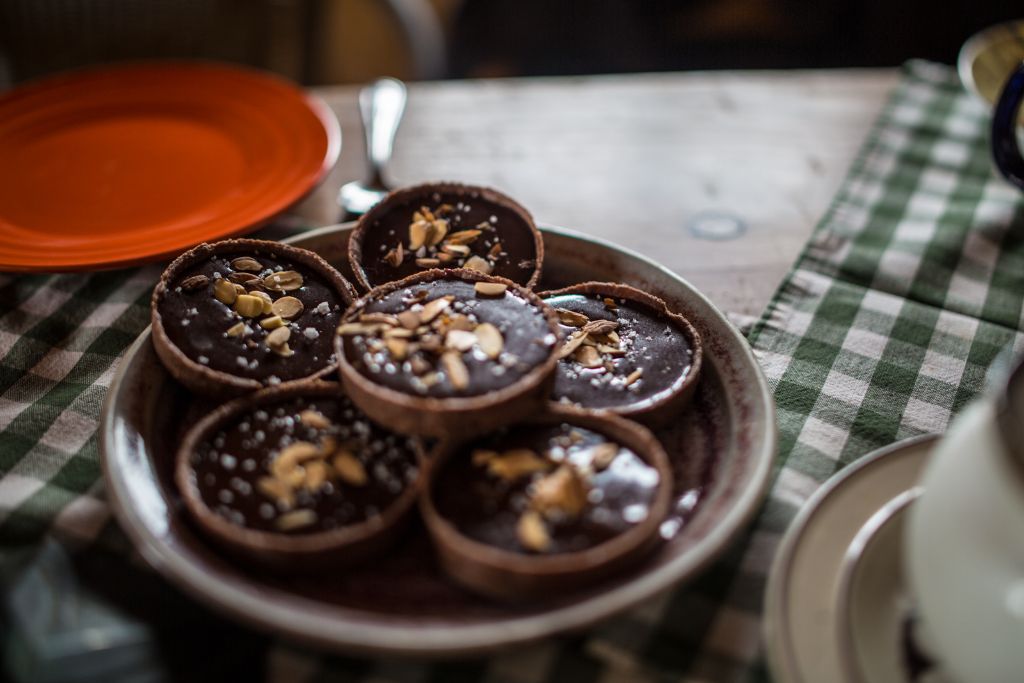 Soon, I will eat you.

As we wend our way to Ojo, I catch up on the story behind the podcast.

Liz came to Taos in 2014 and was soon hired as the curator at the Harwood, after seventeen years at the Art Institute of Chicago. David has worked at the Harwood on and off, in public programs and as a preparator, for several years; but he’s been in Taos for decades, and if he doesn’t know most of the players in the art community, nobody does. When Liz first arrived in Taos, David began introducing her around town; this led to an informal tea with an artist friend, which led to four hours of veritable oral history of art in Taos, which led to the inception of Art + Tea. 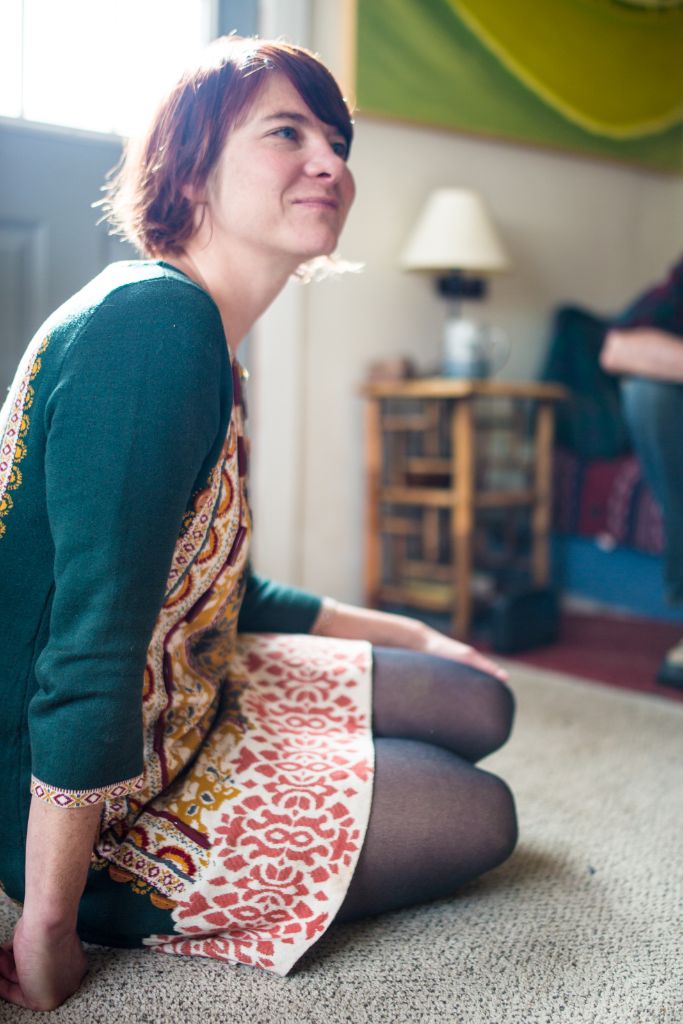 “We realized that there was this amazing opportunity here, and that it would be selfish not to share it,” Liz laughs. When David suggested an hour-long podcast built around informal conversations with local artists, Liz immediately saw the opportunity to expand the museum’s archives to reflect today’s art community.

“It’s really exciting to have a museum that’s focused on the art and art history of the region. But you can only have so many exhibitions per year, and there are only so many kinds of art that can be exhibited. So how do we tell the other story, the story of what’s happening in Taos now?” Liz says. “This is the town. It’s really important to this community to know what brings artists here, what’s driving them – that’s what’s making the town what it is.” 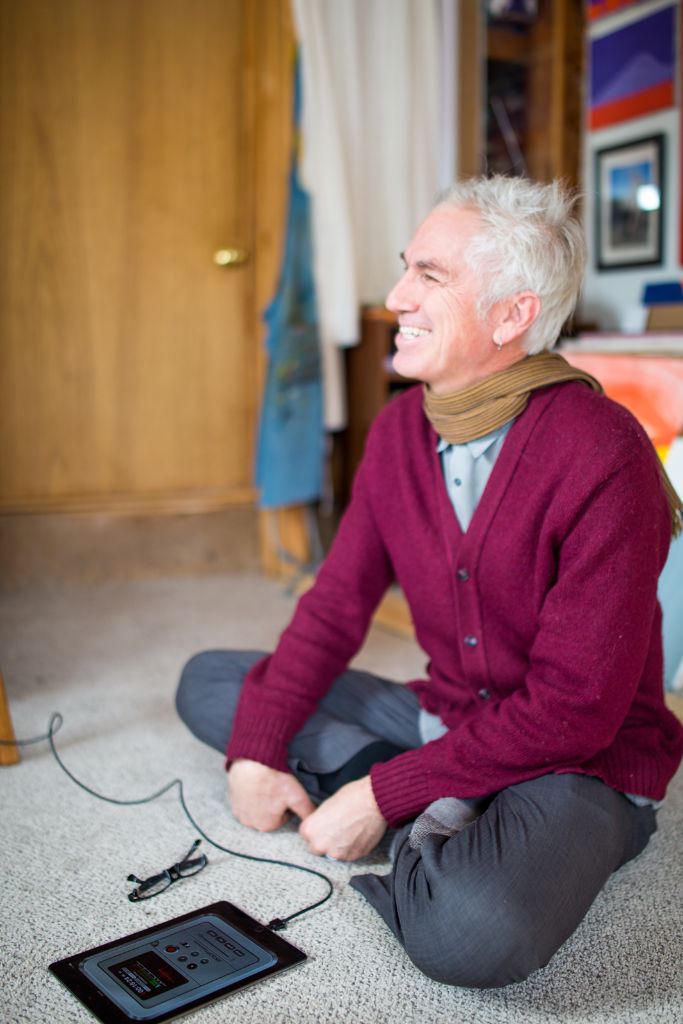 The podcasts get at the work and the practice of art in a different way than you would ever experience on the walls of a museum. “The museum is interesting, and I think it can be a hub for great artworks and objects, but it really is about making it part of a full story. So the museum becomes a node in the network, rather than ‘to experience art you must come within the walls’,” explained Liz.

With her years of art-world experience and infectious enthusiasm for exploring how art touches our lives, let’s call Liz the “Art” of the podcast. David, longtime pastry chef and tea aficionado, makes the beautiful tarts and pairs them with local tea.o.graphy teas (Liz: “because it’s civilized, to bring something nice when you go to someone’s home”). This makes David, in my estimation, the “Tea” – which also encompasses his love of old-fashioned, tea-time-style conversation.

“I don’t have a visual art background, a ‘grounded’ art background,” David says. “I have opinions, but I can’t really explain them in art-talk, so I like to hear artists talk. I always have.” This, by the way, should be understood as false modesty; one of the most well-read and artistically-broad fellows around, David has plenty of “art talk” up his sleeve, as you’ll find from the podcast. 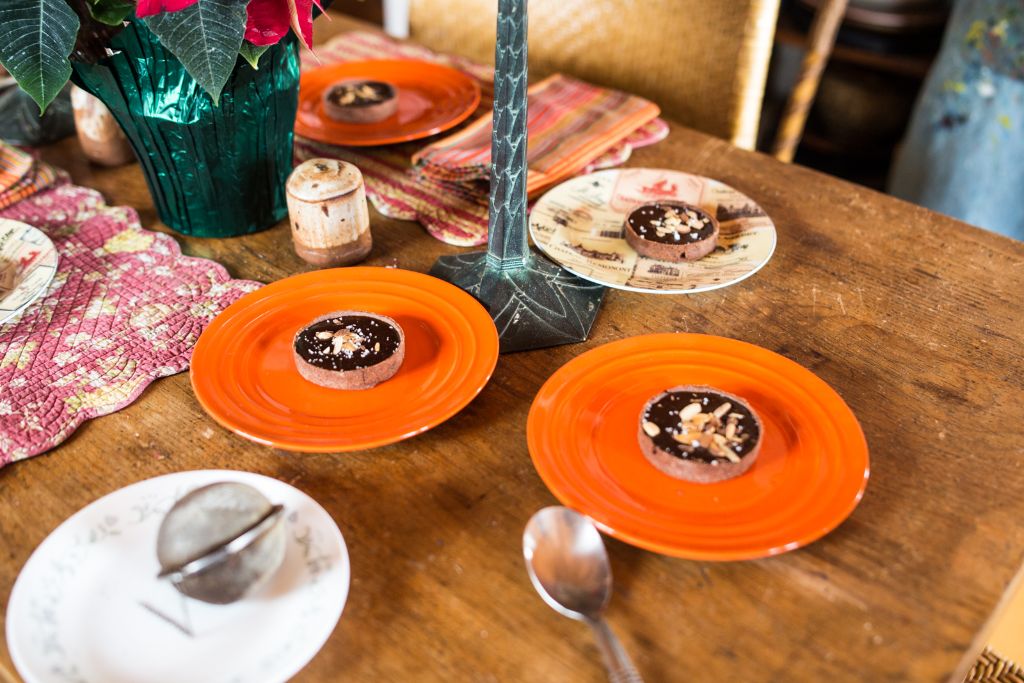 Did I mention that David makes amazing tarts?

Put it all together, and Art + Tea is a lovely exploration of what it means to be an artist and conversational human – in Taos, specifically, but in the larger world as well. “It’s inspiring to allow people to talk about who they are, what drives them, to bust assumptions,” Liz says.

Prior to DePuy, they had spoken with three local artists: Scott Moore, Debbie Long, and Rachel Preston Prinz. They’ve been careful to let place lead the way for the conversations. With Scott, they trekked out to the Beautiful Midden with chairs and a foldout table; with Debbie, they went inside Naima; and with Rachel, they went down into a pit house. 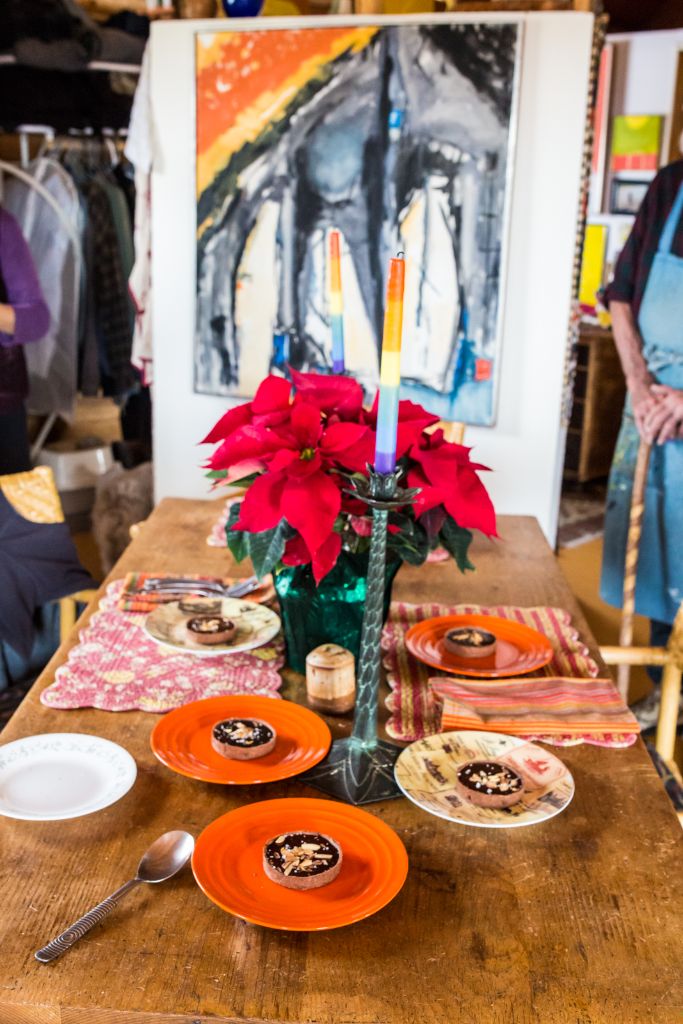 Thematically, one of the things they heard from each of those artists is that it’s a conscious decision to live in Taos as a working artist. It’s not an easy place to get in and out of; it’s not an easy place to get noticed, if you’re interested in being noticed by the outside world; and it’s not always an easy place to make a living, economically speaking. That means working artists are constantly reassessing why they’re here, and if they wouldn’t be better off somewhere else. The fact that so many of them choose to stay, despite the difficulties, speaks to that ineffable but undeniable Taos thing that has kept the art bubbling up and swirling around here, time out of mind.

It’s these elements of the conversation that make Art + Tea such a welcome addition to the Harwood’s presence in the community. Liz and David draw artists into intimate, personal reflections on their work, practice, and process. For a town that’s seen, historically and internationally, as an art colony, it’s critical — and delightful for the listener — to continue engaging in these dialogues about the whys, hows, and wheres of the thing.

And speaking of the history of Taos art: forty-five minutes later, we arrived (unscathed) at John DePuy’s beautiful home and studio in Ojo Caliente. DePuy has been based in or around Taos since the 50s; he was best friends with Edward Abbey, and back in the day he rolled with the circle famously known as the Taos Moderns (listen to the podcast for his opinion on that nomenclature!).

It was a joy to watch David and Liz together in action. After exchanging pleasantries with John, his wife Isabel (also an artist) and his 10-year-old daughter Noelle (home from Taos Academy on a snow day), we moved into John’s studio space for the official podcast recording. 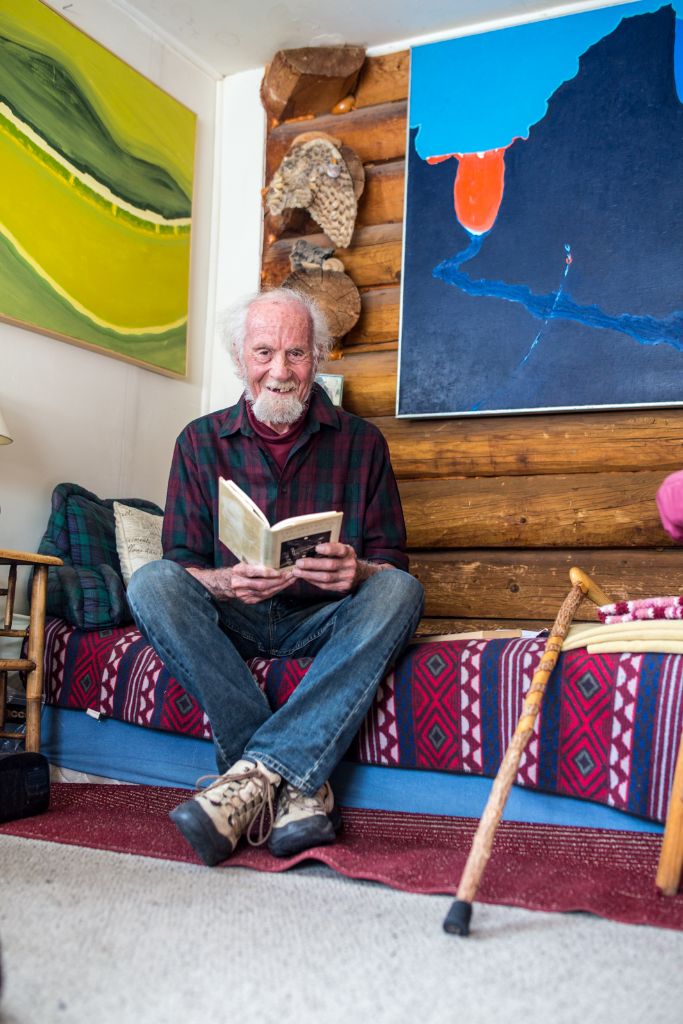 Our podcast hosts had come prepared with some questions, and with a broad arc for how they expected the conversation might go, but they pretty much let John speak for himself — sometimes nudging and guiding the conversation but largely letting it roam at will. And roam it did; DePuy is chock-full of stories and reflections about a lifetime of Taos artmaking. I’ll leave you to learn all about DePuy himself from the podcast, which you can find right here.

So brew yourself a nice cup of earl grey, rustle up some delicious treats, and settle in to check out the Art + Tea archives. Whether you’re an artist, connoisseur, or amateur; a local, tourist, or distant web-visitor, you’ll be pleased to find yourself peering through a whole new lens at the Taos art experience.

Listen to the John DePuy Episode!

Catch the show at the Harwood:

JOHN DE PUY: PAINTER OF THE APOCALYPTIC VOLCANO OF THE WORLD
Saturday, February 13 – Sunday, May 1, 2016

All photos by Rita O’Connell, LiveTaos