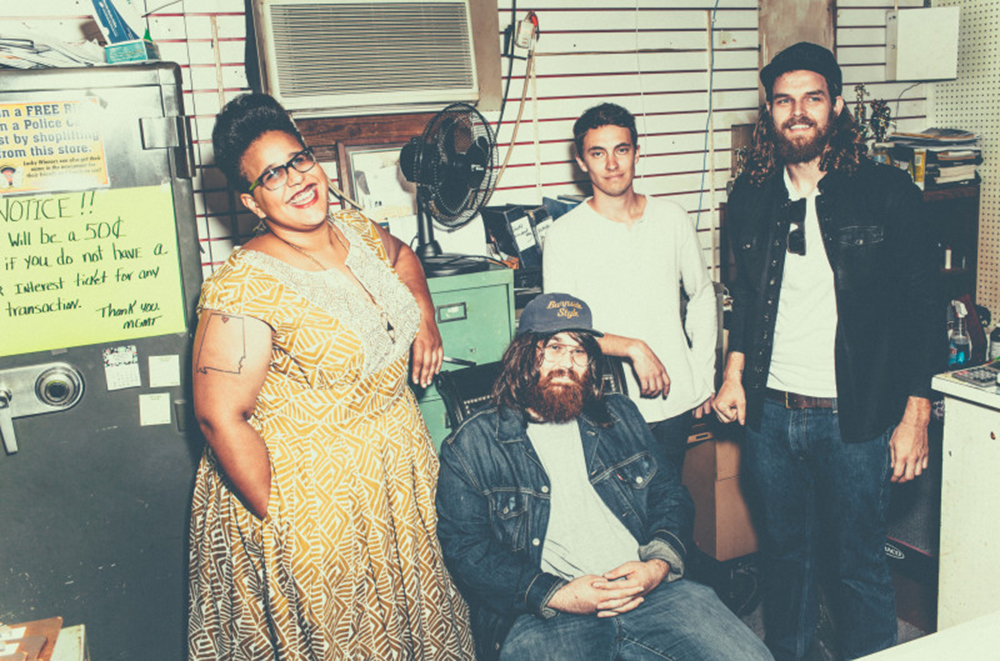 It’s Alabama Shakes week here in Taos, and the Saturday, August 6 concert in Kit Carson Park is officially sold out. That means downtown Taos is going to be teeming with upwards of 8,000 people this weekend.

Never fear: whether you’re looking for tickets or trying to plan your weekend in Taos, LiveTaos is here for you.

Scroll on, adventurers, for a robust Shakes Week Q & A!

Ok, start from the beginning. What is “Alabama Shakes Week”?

Multi-Grammy-award-winning artists Alabama Shakes are coming to Taos on Saturday, August 6, courtesy of Walking Rain Productions and AMP Concerts. They’re touring on the wings of their fantastic newest record, Sound & Color. This band is amazing. Never heard of ’em? Here, check it:

I heard it’s sold out. Can I still get tickets?

The official word is that all 8,000 tickets are sold for the concert in Kit Carson Park. However, tickets went on sale a while ago, so there are plenty of people experiencing buyer’s remorse and re-selling their tickets on Craigslist and facebook. Search “Alabama Shakes Taos Tickets” and you’ll find a lot of opportunities to buy, some even at face-value. Word is there are a bunch in the facebook page For Sale Taos.

I’ve already got my tickets. What do I need to know?

The Alabama Shakes show is in Kit Carson Park — doors at 5pm, show at 7:30pm — with opener Dawes (also an excellent band, see for yourself).

You can find the complete, official show guidelines here. The big recent change is that chairs are not going to be allowed after all; seat cushions and blankets are a-ok, but it’s going to be a standing-room kind of show, so wear comfortable shoes and get ready to dance it out.

If you’re local, or a visitor coming to Taos on Friday night, check out the Alabama Shakes Pre-Party with New Orleans funk band Galactic at Taos Mesa Brewing. Tickets are moving fast for that, too, so grab ’em while you can!

How do I find my way around?

Here’s a helpful walking map the Town of Taos and Taos.org have put together. Frankly traffic is probably going to be a bear on Paseo del Pueblo, so drop your car off somewhere and hoof it for the day. 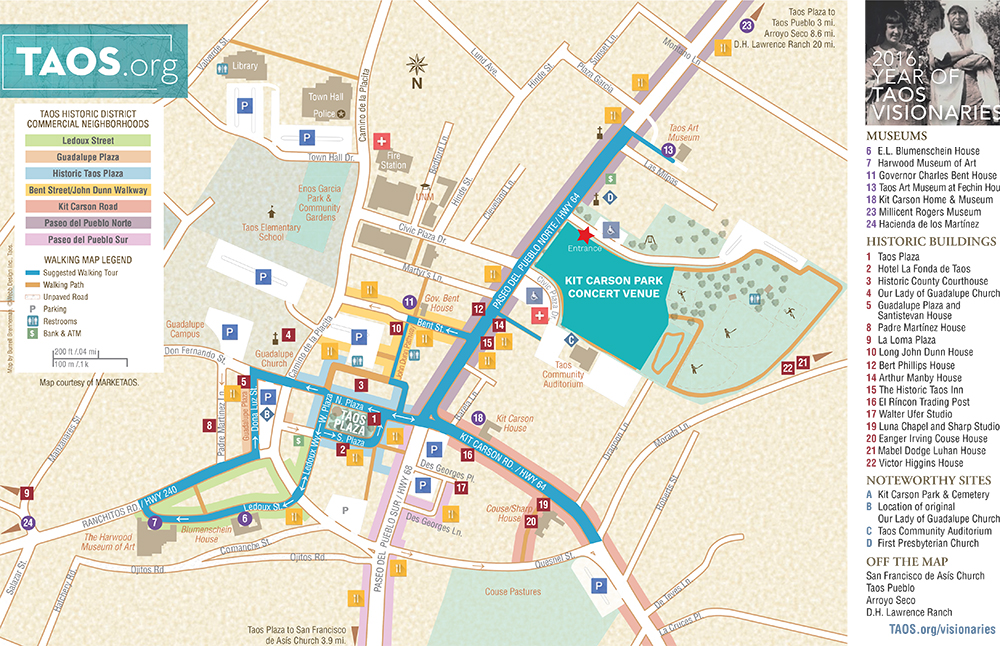 There are a lot of options for food and drink in the immediate vicinity of the park. A sampling:

I’m a night owl. What happens after the show’s over?

The following downtown bars/restaurants are staying open later than usual:

And of course the Alley Cantina is always open late (with live music!) on Saturdays. 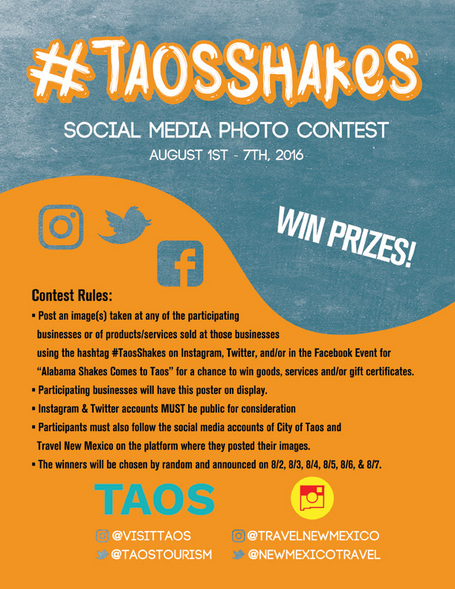 There’s an ongoing social media photo contest called “#TaosShakes” August 1 – 7 (that’s this week!). Post your photos taken in participating local businesses on Instagram, Twitter, or Facebook using that hashtag and be entered to win prizes. (Good prizes, too, including a 4-person stay in an Earthship.)

Participating businesses are currently listed as Wanderer Taos, David Anthony FIne Art, Orale Gallery, Taos Tattoo & Body Piercing Gallery, World Cup Coffee, The Burger Stand at Taos Ale House, and Earthship Biotechture, but keep an eye out for that orange poster, pop in to snap a picture, and hashtag merrily away. Prizes will be awarded every day starting August 3. Find all the details here.

What else can I do around town?

Funny you should ask! We have this excellent entertainment calendar just waiting for you. Everyone’s going to be getting in on the action, so plan to spend some time wandering in and out of the shops and restaurants in downtown Taos. Here are a few of our specific event recommendations for Thursday – Saturday:

Check out live music on Taos Plaza from 6 – 8pm at Taos Plaza Live — a classic summer community gathering in Taos. Then head over to Ennui Gallery on Bent Street to see Zephaniah Stringfield and bluegrass favorites The Noseeums, 6:30 – 9pm. Both events are free!

FRIDAY AUGUST 5: BIG SWING THEORY at the Adobe Bar at the Taos Inn

If you’re not heading out to the big Galactic show at Taos Mesa Brewing, check out local swing heroes Big Swing Theory at the Adobe Bar. Free! 6:30 – 9:30pm.

SATURDAY AUGUST 6: TSV UP & OVER 10K, and HEADS UP MUSIC SUMMER SHAKEUP

Are you of the athletic persuasion? Taos Ski Valley’s Up & Over 10k is Saturday morning — registration at 7am, race start time 9am. And after the run but before the Shakes, stop by Taos’ new record store, Heads Up Music, for a full day of performances by local DJs and musicians!

We’ll keep the updates coming as we receive them this week, so stay tuned here and on facebook.

If you know of other great things going on in Taos this week, drop ’em in the comments or email [email protected], and we’ll include it here!