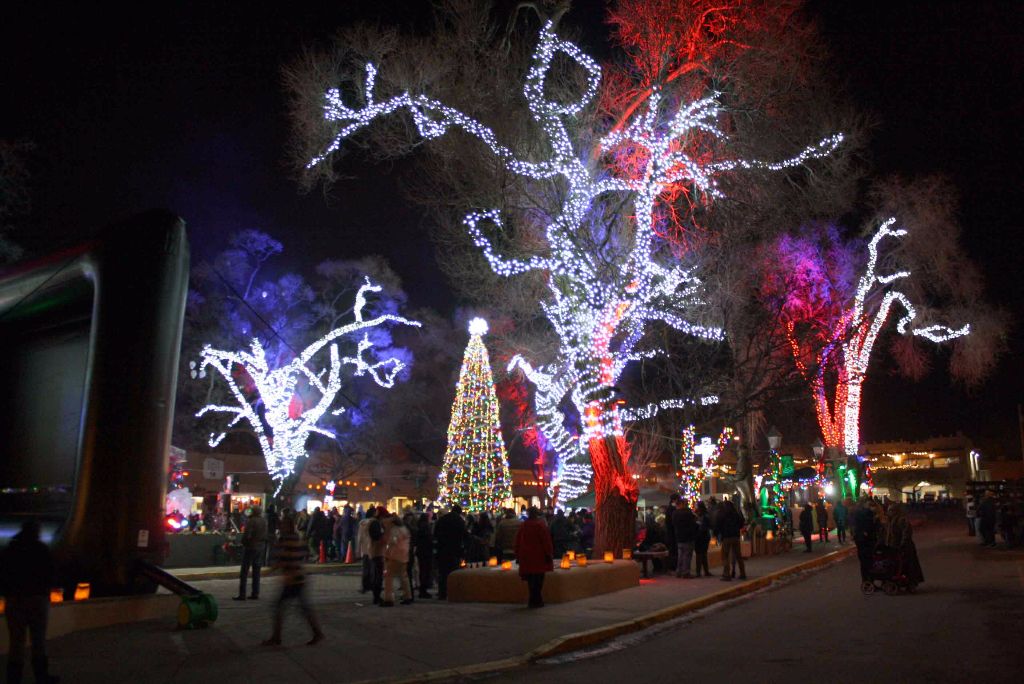 My first impression of the Plaza wasn’t a particularly good one and the impression remained for many years. It felt inauthentic to me – a fabrication of what Taos is “supposed” to look like, a pretty-fied theme park version, complete with adobe plaster and carefully hung chile ristras. Yes, Taos is built from adobe and ristras are definitely part of the historical culture, but Taos is also a very funky place, full of unique individuals and strange goings-on and the Plaza never reflected that to me. It felt like a destination created for the tourists, because that is what it had become.

I have attended several events on the plaza in the past few years, from the usual, like Taos Plaza Live, to the new, like this year’s New Year’s Eve party. Many of the recent events are evidence of the Town of Taos’s doubled-down efforts to change the meaning of the space. In addition to holding the Farmer’s Market on the Plaza, they expanded the traditional Halloween party by adding more decorations and activities, and for the holiday season, they increased the amount of lights by more than double (triple?) and added music. The lights have generated a fair amount of controversy, with some deriding them as “gaudy” and not in keeping with the historical aesthetic. But the plaza’s history is actually about community, and not just architecture and style – it’s much more than that, it’s about festive gatherings and yes, spectacle. And the recent efforts of the town are a clear reflection of that intention. 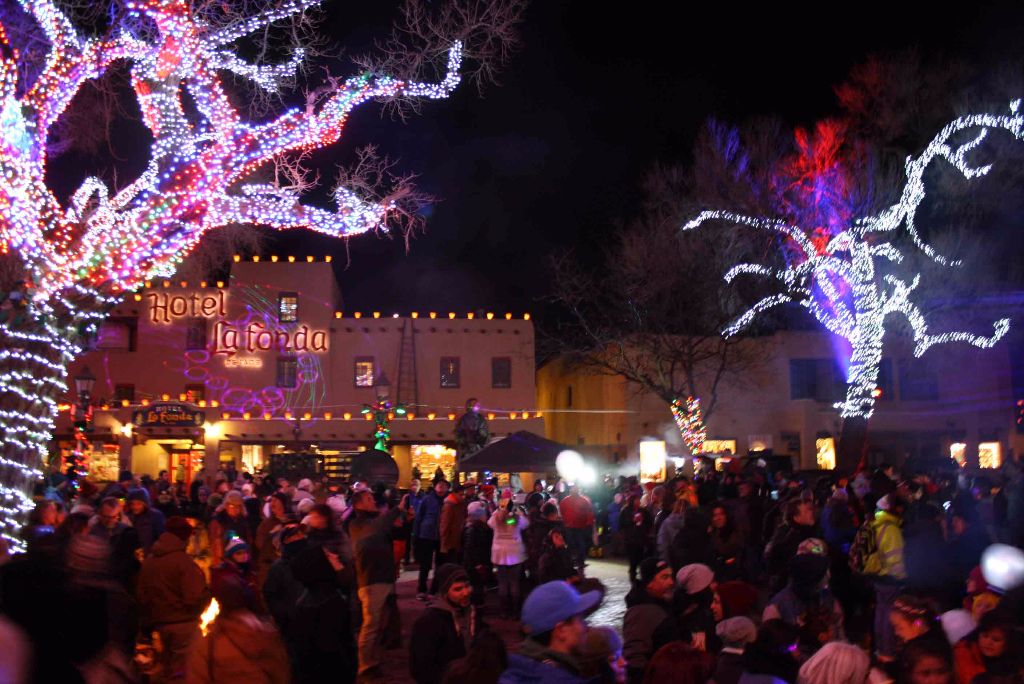 I was working retail on the Plaza on Christmas Eve and the plan was to attend the celebrations at Taos Pueblo that evening, but late shoppers kept us from closing the store with time enough to get over there. Instead, several of us went for a stroll around Taos Plaza. The snow was falling lightly, the lights and music were in full swing, and we milled about with several other groups, all just enjoying the atmosphere. Many cars were circling the square as they enjoyed the lights from the warmth of their vehicles. It was lovely, and felt very much like a community space. 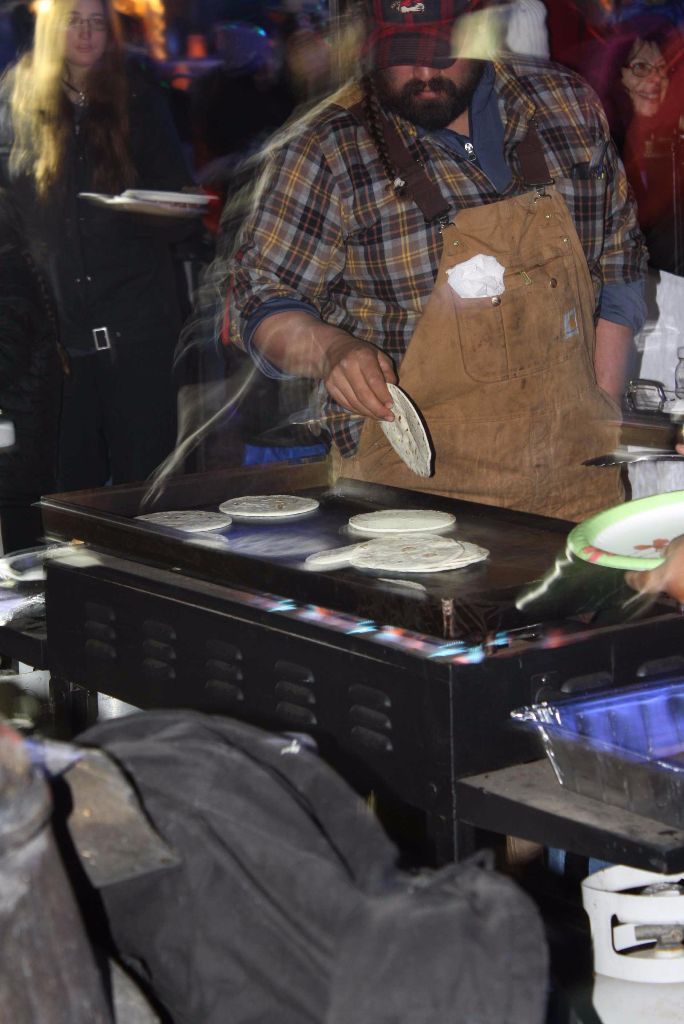 Fast forward to New Year’s Eve and the town’s party on the Plaza, complete with Mayor Dan Barrone roasting one of his pigs (a big one, I heard), which he then served up with tortillas to a long line of people. There was also a large inflatable screen broadcasting the NYE countdown interspersed with music videos, a light show, bonfires, live music by The Damn Band and special guests like El Güero and Elizabeth Jose, and a finale of fireworks at 10pm. During the event, the mayor took to the microphone to thank everyone for coming out and stressed that the point of the event was community, a chance for family and friends to get together and celebrate. What he didn’t say, but what was abundantly clear, was that the Plaza was exactly where this type of thing should be happening and that it should be full of spectacle and wonder, food and fun, and a nice big crowd of Taoseños. 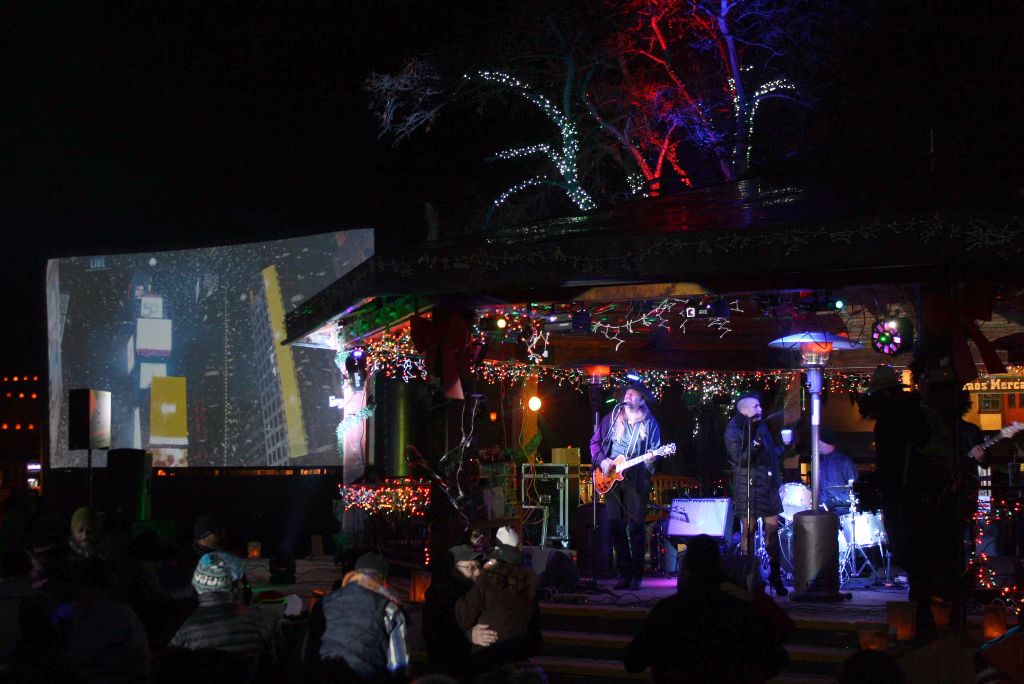