Thank you for the great skiing you’ve given us at Taos Ski Valley the past few days. I can probably get you a discounted lift ticket if you want to come down to check out our killer terrain. If you do come, could you bring your toolbox and try to fix Lift #1? It’s been wonky and spewing diesel smoke all season. It was even completely out of commission on one of the best days of the year. Maybe a Leatherman is all you’ll need.

To be fair to the hard working lift maintenance guys and to shut up the haters, here’s the rumor-free, gossip-less, no whiners answer to what’s been going on with lift 1 this season, given to me by John Kelly, Director of Operations for Taos Ski Valley:

The issues on Lift 1 this year have surrounded our power and electrical systems with the lift. This has resulted in down time for repairs and testing. For most of the season we have been operating on our generator, with no issues. The lift was down yesterday due to an issue with the emergency brake. Lift Maintenance noticed the issue during their checks in the morning. It required disassembling the brake, performing some fabrication work, and putting the brake back together. This issue has been fixed. 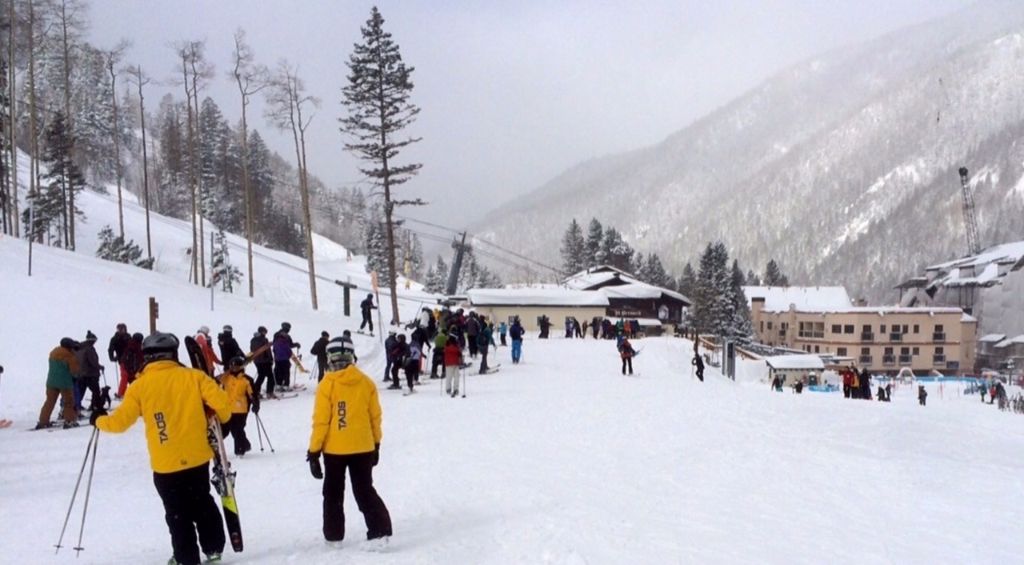 With lift 1 dead on Tuesday, the line at lift 5 extended into the Pioneers area.

It’s time to think about the Ben Myers Ridge-A-Thon. This year is the event’s 20th anniversary, and it’s going to be bigger than ever. They’ve added a couple more categories to make it easier to participate for people who don’t want hike for five and a half hours straight for two days.

Every year I tell people to get involved, not only because Ben Myers was a friend and remarkable skier, but because it’s for a good cause, and you can score big with the prizes, no matter how many runs you do. Interested in a pair of Volkls, a Never Summer snowboard, K2 skis, Lange boots or Millennium Pass?

Of course, your donations are what really matter, and donors can win prizes, too. I’m shamelessly exploiting LiveTaos to ask you to sponsor me, or my nine year old daughter and Ridge-A-Thon veteran, Angie. Giving is simple. Just go to our online donation pages and give whatever you can. (The website is not set up to accept donations of beads and shells.)

Speaking of shameless, I want to again plug FATMAP, the 3D trail map app I mentioned in the last Yodel. I wrote the content and digitized the map, so obviously, I’m biased, but the thing is legitimately cool. Don’t know the difference between Hair of the Dog, Black Dog, Dogleg and Dogface? FATMAP does. What was the maximum gradient of my line on Bamboo this morning? 47°. What’s the vertical rise of lift 5? 1,671 feet. Rueggli? 84 feet. Check out their launch video or download the map of Taos and many other North American and European resorts.