The forecast for the Taos area is clear and sunny with a high of 68°.  This pattern will hold through the end of the week and next week and the week after that. There is a slight chance for flurries before MLK Weekend.

Though it may not feel like it now, winter is coming. To be precise, it’s coming December 21st, snow or no snow. With some luck, we’ll see some white stuff before then.

Every year, all four local ski and snowboard resorts, and our one cross country area, offer new and compelling reasons to visit them. Here’s what you can do with all the snow we most definitely going to get.

Let’s do this in alphabetical order.

Angel Fire is celebrating its 50th anniversary! They hope you’ll help. Use the hastag- #daysworthsharing on your photos, and be part of their season-long project to make skiers and riders part of Angel Fire history.

The biggest anniversary events are on January 19th-22nd, including a select number of lift tickets for just $5.50, which is what they cost in 1966 when Angel Fire opened.

Angel Fire may not have TSV’s steep hike-to terrain—face it, nobody does— but they do have superb terrain parks, which are getting even better this season. Slope operations manager Jon Eppler is a top park designer who has designed parks for the Winter X-Games and the Burton U.S. Open. Last year he expanded Angel Fire’s Liberation Park and this year he’s added New Mexico’s first and only season-long, lift-accessed boarder-skier cross course.There will be more stash parks on the mountain this season, and to reduce bottlenecking, Headin’ Home and Highway have been widened. Runs will be groomed with two new fuel efficient, and environmentally friendlier PistenBully 440 snowcats that will carve the “deepest corduroy possible.” The list of major events at Angel Fire is quite lengthy to list here, but rest assured Live Taos will keep you posted as they crop up. Angel Fire opens for skiing and riding on December 9.

The Enchanted Forest Cross Country Ski Area is the one place around here where you can ski—or snowshoe—under the light of a full moon without the risk of getting sent back if you’re caught. And yes, Moonlight Nights include campfires, hot drinks, s’mores and yurts. Speaking of yurts, Enchanted Forest rents yurts for overnight stays throughout the year.

If you’d rather ski by candlelight, strap on your skis or snowshoes for the Luminaria Tour on Christmas night. Enchanted Forest’s most popular event is Just Deserts Eat and Ski. Sweet sampling sites are set up along a 5-kilometer course. All you have to do is ski to them and chow down on deserts from restaurants in nearby Red River.

One thing that Red River Ski Area has goin’ on is there’s always something goin’ on. They’ve got their fingers crossed for the weather to cooperate so they can run the Halloween Railjam on October 29th. It didn’t work out last year, but it did the year before that. If the temperatures drop, and they can make enough snow, you could be sliding in October- as long as you’re up for the competition. 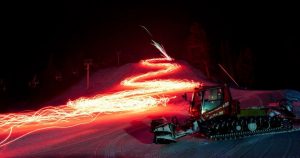 You and 11 of your friends can take an nighttime ride to the top of the mountain in a custom snowcat cab for an extraordinary dining experience at the Ski Tip restaurant. There are torchlight parades and fireworks every Saturday night. During Winter Carnival (January 13th-15th) there’s the Race the Face snowmobile hill climb, and what will most likely be the most fun event anywhere in Northern New Mexico this winter: Skijoring. Translated from Norwegian, Skijoring literally means “ski driving.” Figuratively it means “a galloping horse pulling a crazy person on skis at insane speeds over jumps and around obstacles through the middle of town often resulting in spectacular wrecks and street draggings.” Fun stuff.

The big development on the mountain is the area’s first quad lift. The Emerald Quad, which replaces the Green lift, provides better access to the gentle slopes of Summit Camp, and the terrain served by the silver lift.

The regular ski and ride season at Red River always opens the Wednesday before Thanksgiving, which this year is November 23rd. Red River has not postponed an opening day in 30 years. There’s also snow tubing on Tuesday, November 22! 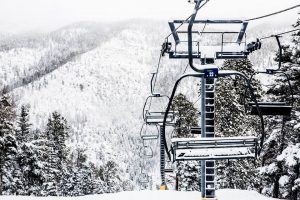 You’ll notice some changes at Sipapu this year, both at the base and on the mountain. By extending Howdy (blue) and Lower Bambi (green), Sipapu is opening five acres of new terrain that is accessible from the Jackalope Quad that was new last season. The lodge and day room have been remodeled extensively.

With 200 skiable acres, Sipapu is a small resort with a focus on family and value. A single day, in-season, adult lift ticket is only $45. Sipapu has a variety of pass options at different price points that offer unlimited access to other resorts in the Southwest. If you spring for a Power Pass, you get unlimited access to Sipapu, Pajarito, Arizona Snowbowl, Purgatory and Hesperus, plus three free days at 17 other resorts in the US, Panorama Mountain in British Columbia, Canada, and Masella in Spain. It’s hard to top that.

Regardless of any upgrades or pass options, Sipapu always has one advantage over the other areas in the state: It’s the first to open and the last to close. Sipapu’s 2016-2017 season opens on November 12, nearly two weeks earlier than TSV and Red River, and just shy of a month before Angel Fire.

The number one question about what’s going on at Taos Ski Valley is, “When will the Blake Hotel open? The answer is probably not as soon as you thought or hoped it would.

Here’s the official word Taos Ski Valley gave me on the hotel’s opening.

“The Blake is slated to open to the public on February 1st, and that is when we will begin accepting full-paying customers and visitors.”

The question I always want answered at the start of a new season is, “Will my Verizon phone work or will I want to chuck it into the river every time I try to make a call?”

Here’s TSV’s answer to that.

“TSV has invested millions of dollars to lay new fiber optic connections into the Ski Valley. Coverage on the largest networks including Verizon, Sprint and AT&T are dramatically improved both in the Ski Valley and throughout the immediate surrounding area.”

In other news, the price for a single-day lift ticket is now $98…. That’s what I said, too.

“Taos Ski Valley is one of the most sought-after skiing experiences in the world, and we are one of the best values in the industry.

I think most people would think that’s all true.

With extremely short lift-lines, extraordinary terrain, a world-renowned ski school, expanded terrain due to glading and snowmaking, we are one of the best values in the industry.”

As for the terrain improvements, there has been more tree cutting in the Wild West. I’ve never been able to find flow in there, so hopefully this will be the year they get it right. North American and Ernie’s were gladed more as well. The Kachina Peak Lift is still there.

Stay tuned for more updates and insider info from Ross as the season progresses. Til Then- Happy Wintering!