THIS PIECE WAS ORIGINALLY PUBLISHED AT TAOSTYLE.NET, LYNNE ROBINSON’S FABULOUS BLOG ABOUT WHAT’S HAPPENING UP HERE AT 7200 FEET. SEE THE ORIGINAL STORY AND CHECK OUT TAOSTYLE HERE. 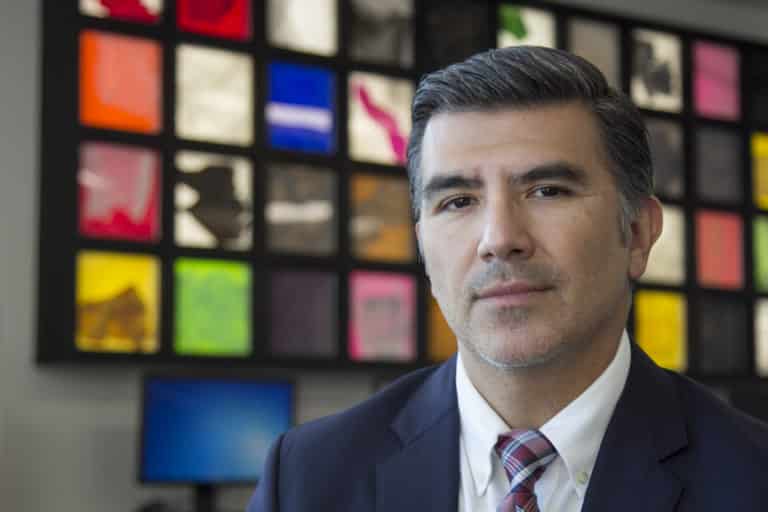 I’m delighted to introduce a new Sponsor to my readers.

UNM-Taos’ Digital Media Arts Program (DMA) Chair and Media Instructor, Peter Walker approached me late last year and asked if I’d like to collaborate on a series of posts about this exciting program available to students at UNM-Taos. After viewing some of the videos animated and filmed by his students, I wholeheartedly agreed.

This cutting-edge, creative and far-sighted program has already attracted students from all age demographics and economic backgrounds and promises to continue well into the future.

DMA is the place where artistry and technology meet. If you are a creative person who loves technology, a major in digital arts could be the right choice for you. DMA students essentially use computers and cameras to create art:  they work in digital photography, animation, electronic sound and music, graphic design, and other digital or interactive media. 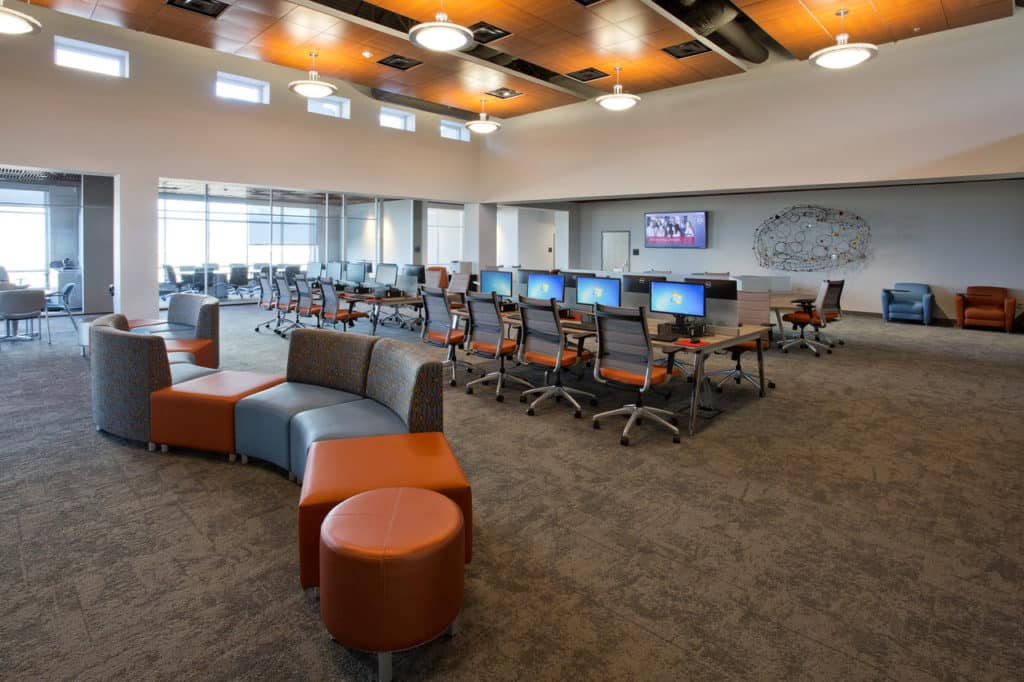 Digital Media Services (DMS) – Louis Moya, Enrico Trujillo, and Francis Santistevan all make this program possible. Obviously, there are others working behind the scenes in Administration, but I thought I’d go directly to the top, and reached out to the new CEO of UNM -Taos, Dr. Patrick Valdez.

After a canceled appointment due to a water outage at UNM’s Klauer Campus, we rescheduled and met one late morning last week, in a conference room at UNM’s Civic Plaza Drive location.

Peter was waiting for me as I pulled up in front of the DMA studio, and escorted me inside to where Dr. Valdez was waiting.

A tall, good-looking man, probably in his mid-40s, Dr. Valdez was smartly attired in a suit jacket and tie, as befitting the head of an Academic Institution. I had arrived in my usual winter uniform of sweater, jeans and boots, and for a moment, wished I’d made more of an effort, but when one gets up at 6 a.m. to write for four hours and has half an hour to get to a meeting, one doesn’t think about these things.

I didn’t worry long. His firm handshake and direct manner immediately put me at ease, and after we found an empty conference room in which to conduct our informal interview, we were soon chatting away like old friends. 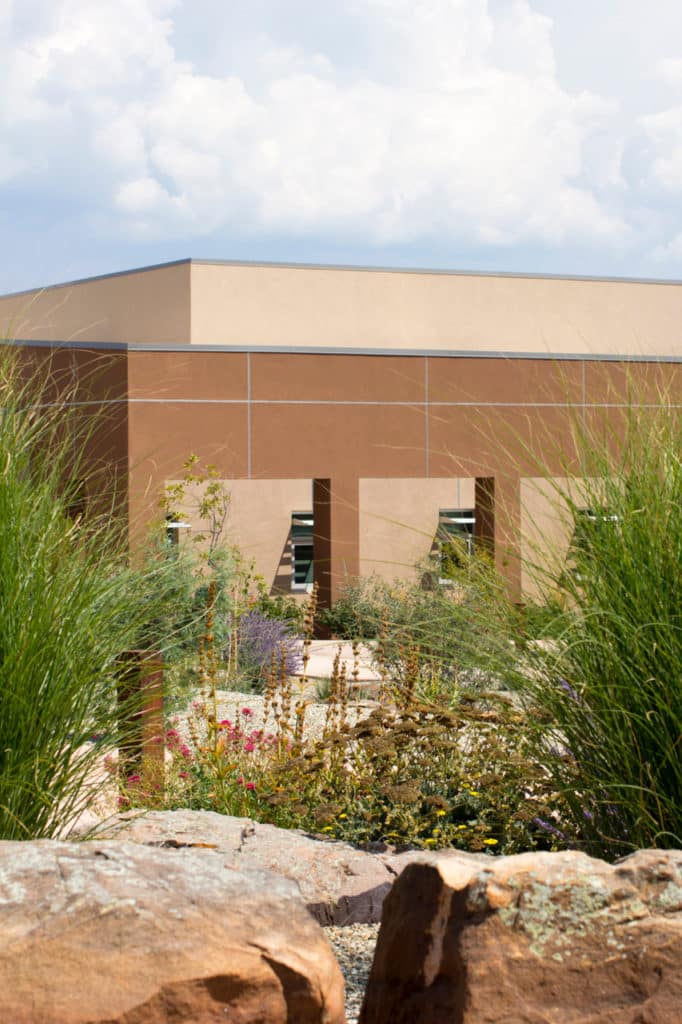 Brilliant, mercurial in his thinking process and incredibly articulate, Patrick Valdez is more than we could have hoped for, to head up our community college here in Taos.

Although his name sounds homegrown, it is not. Born and raised in Texas, 300 or so miles north of the Mexican border, in the Victoria area in Placedo, to a family who has been Stateside for generations, Patrick Valdez grew up wanting to be a lawyer.

After graduating high school, instead of going directly to college, he enlisted in the Air Force, thinking he’d get to travel and see a bit of the world beyond his hometown. Finding himself stationed instead in Biloxi, Mississippi and then back in Texas, he got an honorable discharge after two years of service and began taking classes at a community college in Austin. He received his undergraduate degree from St. Edwards in 1994.

By then he had already married and had two small daughters, but decided to move his young family to NYC, to get his Masters at Columbia University (in 2001.)

Working all the way through his higher education as a community organizer, gave him a unique perspective, rare among Academics, of the various and disparate communities that make up the patchwork quilt, that is America.

Choosing perhaps the most liberal school in the country, he then went on to Ann Arbor, Michigan where he spent the first year of his doctorate as a Rackham Fellow in the Center for the Study of Higher and Postsecondary Education at UM in Ann Arbor. He returned to Texas, where he received his Ph.D. from UT Austin.

Prior to his appointment here in Taos, he was the Dean of the Undergraduate College and Associate Professor of Education at the College of Mount Saint Vincent in New York City.

“Growing up in Texas as a Mexican-American and having had these experiences, living in these communities, I think gives me a special insight into the role a community college plays.” He says now, in hindsight.

“I know how to reach outside the classroom,” he explained, “ to connect with the people we serve.”

Clearly, his loquacious and extremely communicative manner enables him to make connections others might not find so easy. His quick wit and curious mind are highly engaging. An important factor for a man who has made it his business to encourage as many high school graduates as possible to continue on the road to higher education.

“It’s all about understanding who we serve.” He says…

The community UNM-Taos serves, is much like the man who was seated across from me, his long legs stretched out before him. A first generation college graduate who dreamed of seeing the world beyond the close confines of his immediate surroundings. A man who dreamed big dreams and realized them.

I couldn’t help but think how serendipitous his appointment was; that a man such as he, could serve as the ideal role model for our growing community of young people with similar dreams.

He spoke at length about how he envisions UNM-Taos’ future as a Destination College, an idea I’ve long championed. Although not an Academic myself, I have great respect for the Institution and believe absolutely in continuing education for young and old alike.

This, in fact, is what makes UNM-Taos’ campus unique. Ageism is non-existent. In the DMA program alone, students range from 16 to 60, defying the Nation’s current student statistics. A reflection of Taos itself, where age like time, doesn’t seem to matter much.

Dr. Valdez cites the school’s stellar Nursing Program (headed by Melissa Offenhartz, RN, MA, Director, ) which is the only program offering a B.A. at UNM-Taos,  as an example.

“Firstly, the Campus (Klauer), is really spectacular, “ he explained,  “plus I have a few ideas such as working with local Airbnb’s to bring in Cohorts for certain programs.”

“The Nursing Program is absolutely ready for this,”  he continued, “and I’m hopeful that soon we can say the same for DMA.”

“UNM-Taos, is an incredible opportunity for students (both local and from elsewhere), to get their Associates Degree, and (specifically) a two-year Cohort program to get an AA degree in Media Arts, which will prepare them for any University they ultimately decide on.”

“And,” he added, “although we are making a lot of changes as to how we go about our outreach (into the surrounding communities), we are not raising tuition fees.”

Dr. Valdez is himself on the cutting edge of Higher Education’s new model which interacts comfortably with modern technology, using it to bridge the gaps that left so many students behind in the past.

UNM-Taos has made changes right down to the current “enrollment guide” which directs potential students to UNM-Taos’ website, to discover more about the school’s curriculum. 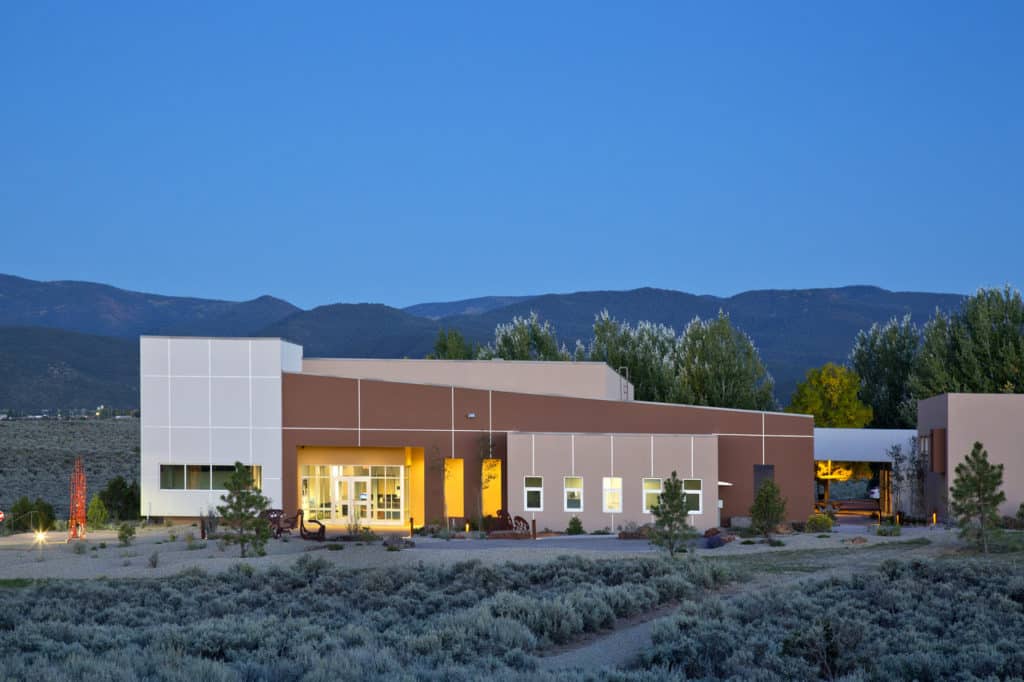 “It will always be in print (for the foreseeable future, at any rate), but we are moving more towards online.” He laughed, “we have to start somewhere.”

Indeed we do, and with Dr. Valdez at its helm, it appears that UNM-Taos is headed in an entirely new direction, one that bodes well both short and long term.

With its brand new studio, expanded classroom and green screen studio space, UNM-Taos’ Digital Media Arts (DMA) program is a welcome, innovative addition to UNM-Taos and I will be sharing much more about it here on taoStyle in the weeks and months to come.

Enroll for DMA 102 (Digital Media foundations) and DMA 210 (Intro Film Studies) for Fall of 2018 and you will be part of an exciting team of like minded creatives, with an eye on the future!

To learn more about UNM-Taos’ DMA Program, please visit their site linked below this post.