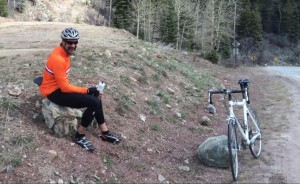 Could a five-mile bike trail be the path to a healthy and prosperous community? Carl Colonius thinks so.

When I asked Carl Colonius about his KTAO-to-Arroyo Seco bike trail project, he suggested we discuss it while pedaling. Brilliant idea, I thought. We chose to ride the seven miles of the Ski Valley canyon rather than the proposed trail route for good reason: the five-mile stretch from KTAO to the Arroyo Seco Community Center is a horrible, scary place to ride a bike.

Even along the best parts of the highway, the closest thing to a proper shoulder is littered with chunks of tarmac, rocks, dirt, and broken glass. Personally, I’ve been sideswiped by a speeding van, and berated by an incensed driver who pulled over and waited for me in the middle of the road. Too many cyclists have similar stories and nearly everyone who has ever ridden any of these five miles of highway has lamented the lack of a safe trail.

Colonius, a co-founder of the Rocky Mountain Youth Corps and its executive director until late last year, says the proposed asphalt trail would stay on the east side of the highway, pass behind Seco businesses like Taos Cow and Abe’s Cantina, cross the creek at El Salto Rd. and terminate in the Community Center parking lot. To Colonius, this relatively short trail is more than just a way to keep people safe and encourage them to ride more.

“A trail from Arroyo Seco to KTAO is important for so many reasons, but most significantly it serves as a high-visibility project to brand and legitimize a trail system,” says Colonius, who sees the trail as a few broad brushstrokes on a much bigger canvass. “The trail would demonstrate the public and economic benefits of trails, and demonstrate a successful public-private partnership.”

The bigger picture Colonius envisions is a trail system that would improve economic development through sustainable tourism, similar to what they’re doing in Durango.

“We target community vitality as an outcome, with opportunities for more active local population, and a draw for hikers and bikers that will build on and enhance the draw of the recreational opportunities that already bring visitors to northern New Mexico,” says Colonius.

An optimistic timeline would have groundbreaking start in a year. Colonius estimates actual construction of the trail will take six months if you include all the features he would like to see, such as signage, lights, benches and water stations. Funding could come from a variety of sources: the U.S. Department of Transportation Recreational Trails Program, federal land access grants, the U.S. Land and Water Conservation Fund, the National Scenic Byways Program, and private money.

Based on his experience, Colonius says this is not a particularly complicated project, but there are many entities involved, and nothing happens if the Taos Pueblo Tribal Council ends up saying no. The state transportation department won’t even consider it until the Pueblo signs off on the project. Colonius is waiting to make a formal request for a right-of-way from the Tribal Council.

“We do need to take it one step at a time to ensure we are expending our energy strategically,” says Colonius. “We are not writing proposals to gain construction dollars before gaining permission from Taos Pueblo to construct a trail within the right-of-way they granted to the state. That would be presumptuous.”

Colonius is a real trail guy. During his twenty years with RMYC, he built miles and miles of trails. He started work on the Seco-KTAO project a few years ago, and he took it with him when he left. With Taos Land Trust as a host agency, grant money from the LOR Foundation has made it possible for Colonius to continue his work.

Of course, Colonius isn’t doing it all by himself. There are many people, agencies and organizations that have to work together to make an Arroyo Seco-to KTAO trail happen. But it’s good to know there’s a real trail guy doing most of the pedaling.