David Cortez has been attending meetings and chatting with town manager Rick Bellis over the past few weeks. Below, he brings you this report on what’s up around town. 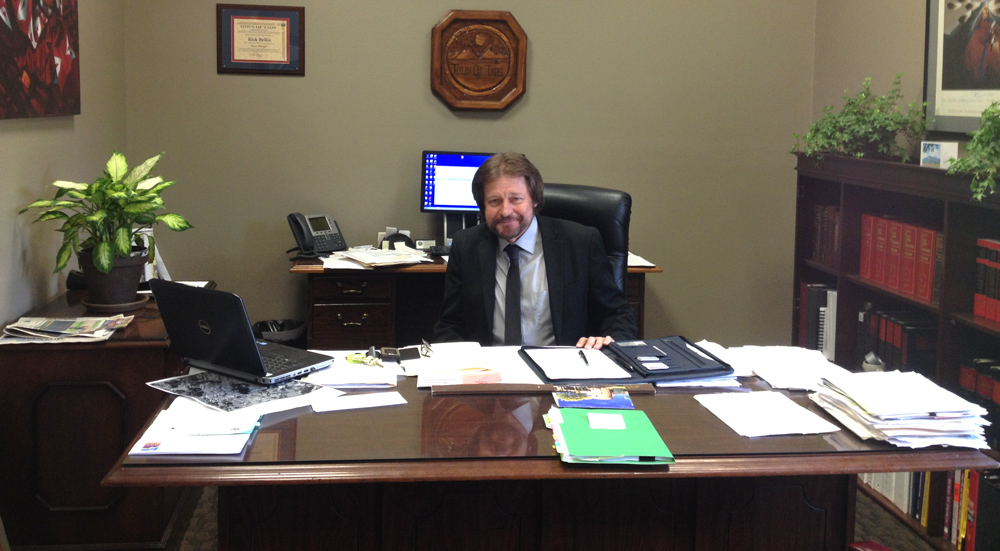 The circumstances surrounding the new name for Kit Carson Park charged up the local populace and brought the new Town Manager Rick Bellis national news coverage, even as the controversy diverted attention from less glamorous issues like potholes, painting crosswalks, and watering the flowers.

Just as Kit Carson seemed more at ease in his final resting place at the park cemetery, here came the Farmers to make trouble for the manager and Mayor Barrone, as the town seems to be in a state of flux around many issues.

“Taos is coming back to life.”

While some downtown business owners opposed the relocation of the Farmer’s Market from Town Hall to Taos Plaza, the move galvanized the public and focused attention on the Barrone-Bellis, Hahn, and Cantu campaign commitments to revitalization. At a public forum in July, merchants yelled and people talked over each other, but the Mayor maintained order with his stern, but gentle style.

The majority supports the Farmers Market on the Plaza. Polly Raye, of the John Dunn shops, said her tenants have written things like, “I am charmed by life on the plaza again.” One person cried with joy when a flash mob, organized by the Taos Opera Institute, broke out into song one Saturday.

The Farmer’s Market manager, Marko Schmitt, says 43 out of 45 market vendors have seen an increase in sales in comparison to the prior location at Town Hall, where about 300 visitors attended on an average market day, while the Plaza location generates between 600-1000.

Some merchants were upset because the town didn’t consult them before making the decision to relocate. Councilor Hahn pointed out that high-dollar stores fare worse than stores like Taos Mountain Outfitters.  A few business owners claim they have experienced a three-fold increase in sales.

Some business owners said the town should subsidize their rent because their sales are down, while trolley and tour bus supporters said closing traffic is affecting business. Due to congestion problems, business owner Balthazar Reed of La Bodega knows traffic/parking is the big issue, and supports a parking structure. Counselor Fritz Hahn reiterated, “There is no such thing as free parking,” and maintains that “common area maintenance fees,” could be in line. Moby Dickens owner Jay Moore is spearheading a parking committee and invites suggestions.

Market congestion seems to be the next big problem to solve, as the multi-level central park plaza limits market tents inside the plaza. Bellis says funds from the State Historic Preservation funds could be used to redesign and renovate the space, an effort Judi Cantu supports.

Regardless, according to the Town Council, the Farmer’s Market “is here to stay” this season.

The Town is searching for a marketing and tourism director and is restructuring the Lodgers Tax Board, which will feature four committees aimed at Marketing, Tourism, Events, and Finance. Rick says locals will be invited to bid on RFPs for individual campaigns for work in graphic design, photography, writing, or video, once a new director is hired. Bellis reminds readers that creativity is key as Taos competes against corporate models and towns with larger budgets.

If you are interested on being on a committee, let Rick or your town councilor know. In addition to marketing committees, there are openings on historic preservation, airport authority, and planning and zoning. The town would like to see more diversity on committees, as currently older Anglo business owners tend to dominate the scene.

Rick claims the new demographic of tourists in Taos consists of individuals between 18 and 35, who seek an outdoor or artistic experience. He refers to Taos Mesa Brewery (TMB), who hosts poetry readings, fire dancers, concerts with bands like Los Lobos, as well as family gatherings. A TMB taproom on the Plaza is rumored; Bellis says wine and micro brewing are very popular, and having places like Eskes and the Taos Ale House are all good for the Town of Taos. Bellis isn’t shy about mentioning he uses the crosswalk between the Post Office and the Ale House quite a bit, and supports making it easier for tourists to walk the town. Councilor Cantu and others support activities like firing up the plaza horno, or featuring local artists producing work in public like painter Ed Sandoval.

Events coming in September like The PASEO, Harwood’s iOrale! (low rider motorcade to Taos), or the Fall Arts Festival, which embrace experiential environments, are similar to events in cities like Santa Fe, where CURRENTS (outdoor projection and installations) and parties like Night Wave featured coordinated events at venues all over downtown. (As an aside, Santa Fe has closed down part of its plaza to automobiles this summer, so closures for the Farmer’s Market on Saturday seem consistent with changes in the region.)

More events and campaigns, like the Chamber’s Buy Local campaign, are in the works as well as motorcycle and auto rallies, beer festivals, concerts, and sports events that should include more participation and coordination with local businesses. People have discussed increasing film production with television pitches for historic stories about people like Manby, as well as improving e-commerce once fiber optic rolls in. Some have also suggested keeping businesses open later on nights like Taos Plaza Live, and working to appeal to the LGBT community more.

The town council has rescinded the name change in order to garner more public input from the community. The cemetery will remain Kit Carson Memorial Park, according to Bellis. Dedicated during the civil war, the park named after Kit Carson was intended to serve as a burial ground for the Territory. The town intends to separate the property out and create a separate deed in perpetuity, to be maintained by the town. “We have due respect for the people that are buried there,” Bellis stated, referring to the famous and infamous named on headstones.

The name change was initiated by a group called the Peace and Reconciliation Council, that includes Lyla June Johnston who has discussed atrocities and letting go of pain on a path to the peace and reconciliation. Johnston believes that the discourse alone is a victory; however short lived the name Red Willow Park was, rejected for the general public’s use by Taos Pueblo. Submit your park name suggestions to your councilor.

Johnston’s recent interview on New Mexico in Focus can be seen here:

Rick says the town wasn’t managing itself properly because little money was assigned to maintain buildings and roads. The Town will probably turn over properties like Ancianos to the county and the soccer field to the school. CAV could be taken over and run by its own organization. According to the records, Bellis said there hasn’t been much effort in promoting the town as a place for new businesses.

Rick says the Town Clerk’s office is doing what they can to scan old documents and make them available online. He hopes the public will be able to fill out permits and licenses, pay taxes, and search for records online by the end of the year.

The Planning Department is now the Planning, Community and Economic Development Department. The town would like to help businesses grow, along with groups like Taos Entrepreneurial Network (TEN) and the Chamber of Commerce, and streamline the permitting process. Fritz Hahn recently spoke with Renewable Taos representatives about implementing more renewable energy.

At the library, the Town plans to keep the fees low or lower than they are now, increase public accessibility to online periodicals, and possibly bring free wifi to a larger area.

The Police Department would like to hire one or two more detectives. The recent drug bust may be just the tip of iceberg, according to Bellis. Drug use leads to increased property crimes; lowering crime is imperative, as the worst thing that can happen for tourism in a town like Taos is visitors being mugged or having their cars broken into.  The mere presence of a parking ticket administrator helps prevent crime, according to Bellis.

The Fire Department has top management and continues to improve, while the town would like to put in more fire hydrants and reduce response times, which helps reduce insurance rates.

The Public Works priorities are roads, long-term capital improvements to the historic district, and replacing lead and clay sewers that are literally collapsing. The money is there, and building the reserves is a priority; plus improving fiscal responsibility, and moving airport operations under Public Works. Rick says this is first time in more than a decade that a road maintenance schedule has been made.

Recycling is on the agenda in the next 30- 60 days, according to Bellis. Plans for acequias are a reality, but only for the long term. A project will take place next summer via a grant for Rocky Mountain Youth Corps to work on the acequia that runs near the Dragoon St. and TCA area. Using wells to supply acequias requires approval from the Pueblo and the State Engineer because of the Abeyta Settlement, according to the town manager. 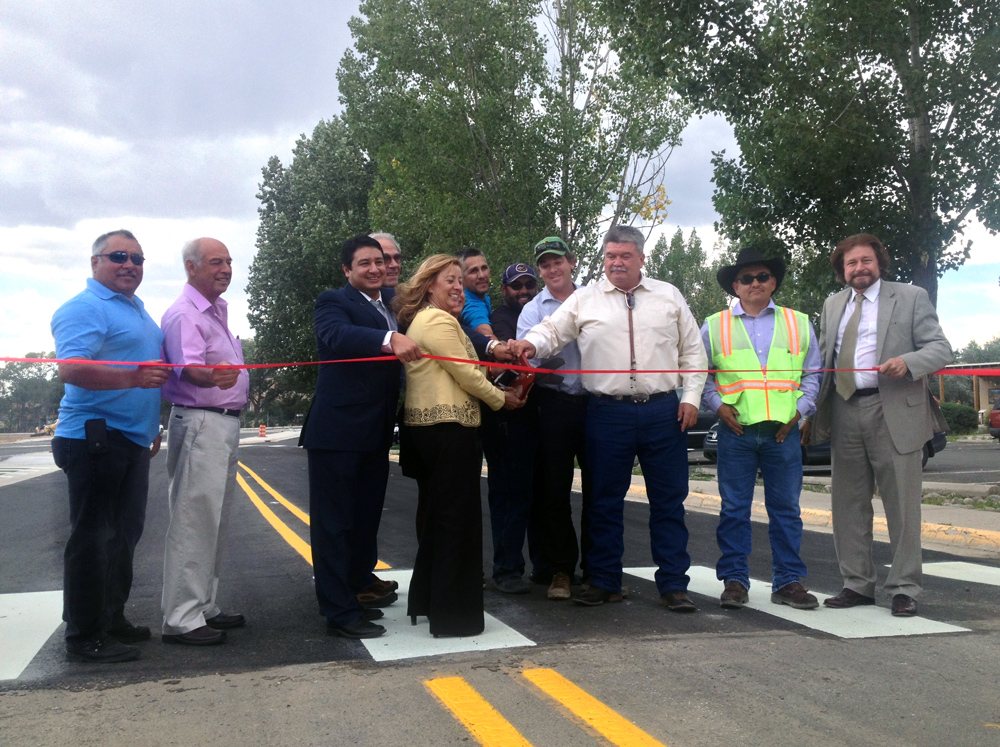 The 24 million dollar Taos airport expansion is experiencing resistance from activists who fear military activity and claim the project doesn’t benefit most Taoseños, only the 1%, jet-set class.

According to Bellis, the runway will help direct air traffic away from the Pueblo. He suggests there’s no indication the military will use it (although the military can use any airport in the US if it so wishes). He adds that the Forest Service and civil air patrol benefit from the expansion.  A new hanger may be in the works and the airport serves the community in search and rescue missions. Upgrades to radio equipment, beacons, VFR controls, perimeter fences are designed to allow planes to land safely and remotely, improving public safety.

There will be a public hearing about the airport on August 25th at 6pm at the Town Chambers.

Want to keep up with the goings-on of the Town of Taos? Find their public meeting schedule here.