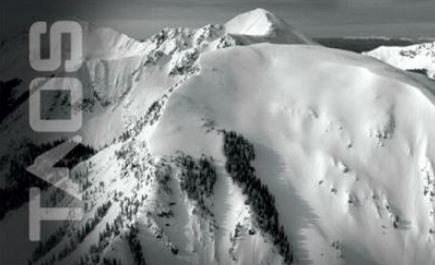 Taos Ski Valley is touting its recent designation as number 20 on Ski Magazine’s best ski areas list, as well they should. TSV scores in the top 5 for challenge, character, and value.

The terrain, of course, isn’t going to change. We have some of the most bad-ass terrain in the world. Frankly, most other resorts are downright boring compared to Taos. Unless you’ve got gobs of cash for a heli-trip in Alaska, why go anywhere else?

Character? That remains to be seen.

It’s true that Taos Ski Valley was slowly dying. The Blake family was no match for giant, soul-crushing companies like Vail Resorts and Intrawest. I, for one, can’t thank them enough for the world they created up there, and for never missing payroll. Yet visitor numbers declined almost every year for twenty years. If you live here to ski, it was great. Even on the deepest powder days you could slide right onto Chair 2. But, of course, the local economy wasn’t thriving.

If you’d rather ski than eat, you may not love the changes going on in the Ski Valley, and there are many. But deep down, you know it has to happen.

Briefly, here’s what to expect and where to find things on opening day, November 26 (as in years past, the Ski Valley will be closed on Mondays, Tuesdays and Wednesdays until December 10):

Lift tickets and ski school sales will be in a temporary building between Cold Smoke Photography and the Thunderbird Road bridge. The season pass office is still below TFK’s. Taos Ski and Boot, the rental shop, Andean Software, the Chamber of Commerce and seasonal lockers are located in the circus tent on the grave of the Thunderbird.

There will be new parking spaces, a base area ski patrol office and, no doubt, a little chaos.

They’ve done a lot of glading work, including burning dead trees and slash in Ernie’s and the Wild West that should help their skiability. TSV plans to groom more in Hunziker Bowl and Kachina Peak’s Main Street. Yes, the lift is still there.

There is unequivocal good news: Taos Ski Valley — the resort, not the village — raised its minimum wage to $10 per hour.