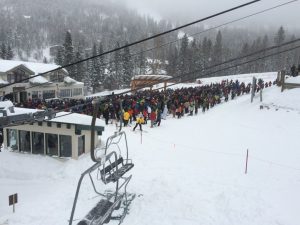 The longest line I’ve ever seen at TSV, but no one in it got buried in an avalanche.

There’s a lot of snow up there. The skiing is as good as it gets. I assume everybody knows that already.

To all the ignorant haters who booed patrollers from the lift line last Sunday, you should have your skiing/riding privileges revoked. You sounded like drunken yobs heckling the Undertaker at Wrestlemania VII. I heard patrollers say they saw more slides on Sunday than on any one day in the past 20 years. If you have a problem with waiting, go shred Angel Fire. To the rest of you, thank a patroller when you see one. They deserve it.

The New Belgium Mountain Adventure—formerly called Scavenge—is Saturday, March 14. Wear a tutu, chase chickens, search for Bigfoot and raise money for the Field Institute of Taos. Registration opens at 9:00 at the base of chair #1. The event runs from 10:00 to 3:00 with registration open until noon. There are always great prizes, like custom Fat Tire skis from Rocky Mountain Underground, swag, and as you probably guessed, beer. Just $10. More info on the event and the Field Institute at fitaos.org.

The Ben Myers Ridge-A-Thon is Friday, March 20, and Saturday, March 21. This extreme ski/board event has been going since 1997, when friends of Ben Myers wanted to raise money to help him with his medical expenses. Ben, who could ski anything, died of cancer at 26. Now the money goes to the Taos Community Foundation’s Emergency Medicines Fund.

I know you’re in it for the altruism, but the prizes are the best you’ll see at any event in Taos. No matter how much money you raise or how many runs you complete, you’ve got as good a chance as anyone to win a Millenium pass from TSV, Volkl skis, K2 skis, Lange Boots, a Never Summer snowboard or lots of other prizes.

If you’re not up for competing, you can sponsor a participant per run or at a flat rate. Even if you can only kick in a couple of clams, you’re helping. If no one has hit you up yet, you can pick a participant at classy.org/ridgeathon and donate online. I always put my money on an adorable eight-year-old ripper named Angie, classy.org/angierockstheridge.