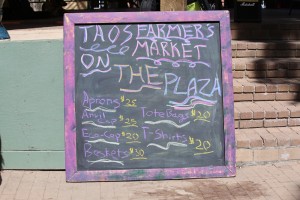 On Saturday, May 31, 2014, everything changed: the Taos Farmers Market moved into Taos Plaza, from its former home in the Town Hall parking lot.

And you would have thought the sky was falling.

“The Plaza is for tourists!” “Where are the vendors going to park??” “Do it in the winter, when business is slow for Plaza merchants!” “Vegetables are heavy — how am I going to get them to my car?” The litany of criticism about the move in the week leading up to it was unrelenting and startlingly aggressive, for something that hasn’t been tried since the 1930s and seemed like a pretty good idea.

And after all that, guess what?

Having the Farmers Market on the Plaza is awesome.

It was gorgeous. It was busy (they had 350 people by 9am). As far as I could tell there was plenty of (free) parking. My guess is that if you’ve got a ton of heavy vegetables, a friendly fellow Taoseño will help you lug them to your car. I spoke with several Plaza and John Dunn merchants who said they were so busy with the spillover traffic in their shops that they didn’t even have a chance to come visit the market. There was a cello/violin duo, a guaranteed sign of class in any context.

I chatted with Marko Schmitt, the market manager, who confirmed that the move to the Plaza exceeded everyone’s expectations. And everybody was chipping in to make it happen. “We’ve had solid support from the mayor and the city planner. The police chief has been down here all morning, walking around talking to people, reminding everyone to breathe and relax,” said Schmitt. “Everybody’s putting their best foot forward.” 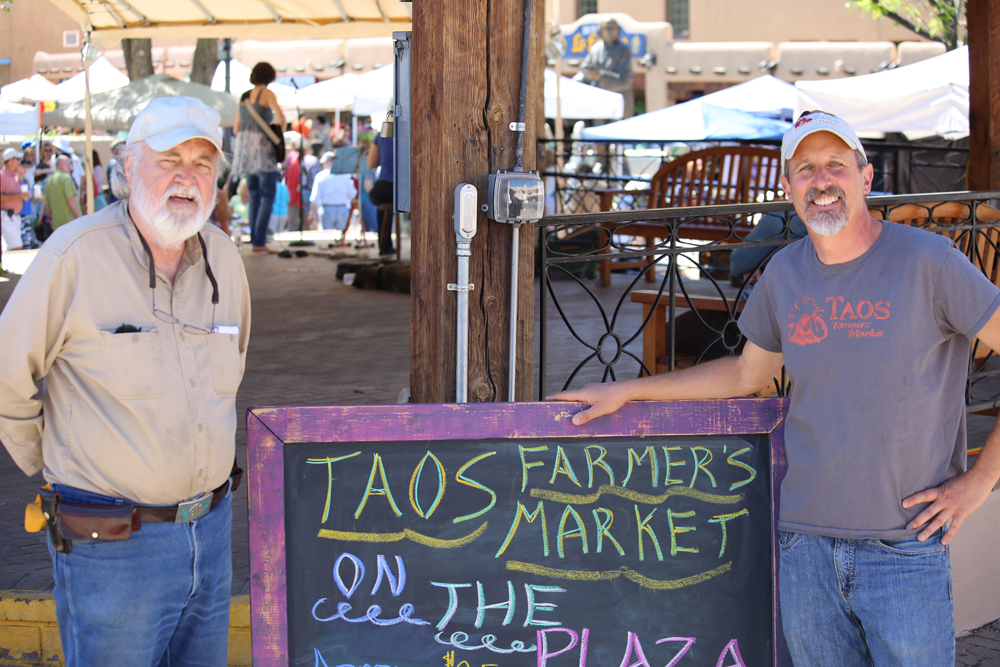 Was there resistance? Of course. Resistance from some vendors, resistance from some Plaza merchants, the above-mentioned resistance from some locals. Let’s face it, some people don’t like change. But Schmitt’s positivity, efficiency, and visions for the future seem to be steering everyone through just fine — as I walked the market on Saturday morning, even the previously-skeptical seemed entirely pleased with the market’s transformation.

And that’s a good thing, because this move is only the beginning of the market’s evolution. The lengthy list of upcoming plans includes partnerships with the Harwood to do kids art projects and with WIC to do food demos; the development of a winter market, so the fun can continue all year round; and, evidently, Town Manager Rick Bellis hopes to see the addition of a petting zoo.

Schmitt brings his business background to the table to support these goals. “A farmers market should be run like a business,” he says. “Farming is not a hobby — we’re really respectful of their work. We like to say ‘what’s good for farmers, is good for us.'”

Perhaps chief among Schmitt’s many goals is an effort to help people think of food as common currency. “The Market is a conduit for people to meet and exchange good food and good will,” he told me, and a glance around the happily buzzing Plaza was living confirmation of that ideal.

More than Taos Plaza Live, more than the craft fairs, more than that time there were horseshoe pits there for about two weeks, moving the Taos Farmers Market to the Plaza is that long-awaited and much-discussed lynch pin for bringing locals back to the plaza.

We’ll see you out there.