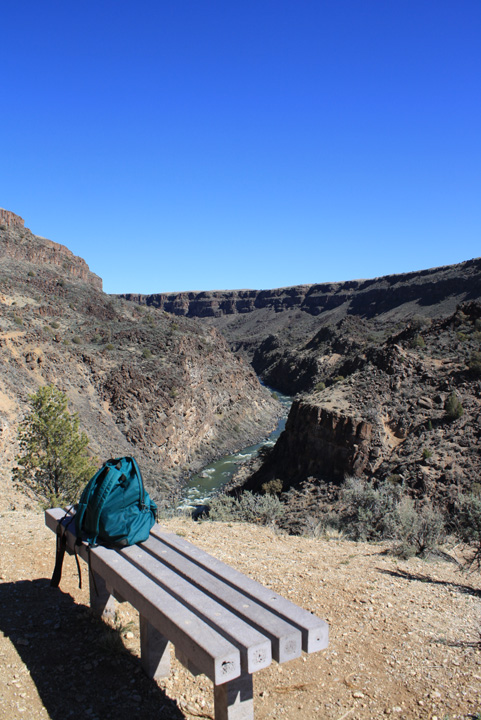 We looked at the weather forecast — and at first, 47 degrees seemed too cold. You’d think, after living 7 years in Taos, we’d know better. We’d know that a sunny, 47-degree day is a gorgeous day to go hiking. Despite our initial misgivings, we set out on the Vista Verde Trail, an easy trail, set just a short ways up the 567 switchback near Carson. It’s a short hike with good payoff, culminating in a gorgeous birds-eye view of the Rio Grande pouring through the gorge.

We hadn’t see Kathy since we left Southern Illinois. We used to hike the Shawnee National Forest together, but this was her first time in Taos. I knew she’d love it. She’s got the adventurous spirit for it. Regretfully, we only had one day, but that’s just enough time to hit some highlights.

There was no one else on the trail. It was a weekday, after all. Perfectly silent, save for the birds and the distant roar of the river. We found the “hidden” petroglyphs and scoured the rocks for signs of bighorn, which remained elusive. At the end of the trail, I sat quietly on the lookout bench while Bill and Kathy ventured a little farther down, closer to the gorge’s edge. There’s just nothing like these moments, the ones where time stops and it’s just you and the piñon jays and the smell of sagebrush – your breathing slows and you find the day-to-day just falling away.

After the hike, we drove the Rim Road back towards town. I used to drive this all the time and had forgotten how beautiful it is. The snow-capped peaks hovering over the dry mesa, the expanse of land and sky. Kathy was delighting in the wonder that the gorge could sit so close and still be invisible, looking as though you could just walk right over it into Taos.

After a deliciously gut-busting New Mexican lunch at Orlando’s, we made our way back down to the river at the John Dunn Bridge in Arroyo Hondo for some good old fashioned stone skippin’. There’s just something about a beautiful day in Taos that begs being outside; that begs fresh air. There were a few more people here than were on our hike; you can usually count on at least a few fly fishers in the area on any given day, but it’s usually not very crowded this time of year. When summer comes, it’s a different story, with lots of people craving the cool water. This really is one my favorite places in Taos, but I prefer coming here when it’s quiet and one can just sit and watch the water, which looks lazy, but is deceptively swift.

Later, over some refreshing microbrews at Taos Mesa Brewing, we shared with Kathy some of the challenges of living in Taos. My husband and I have found ourselves disillusioned from time to time over the past seven years; sometimes we miss the convenience of a larger town, or bemoan the lack of opportunities. But when you take a day –- just one day, and you walk outside and you breathe in that big blue sky, you have no choice but to smile and be grateful to live amongst such beauty. Because there’s just no place else in the world like it. 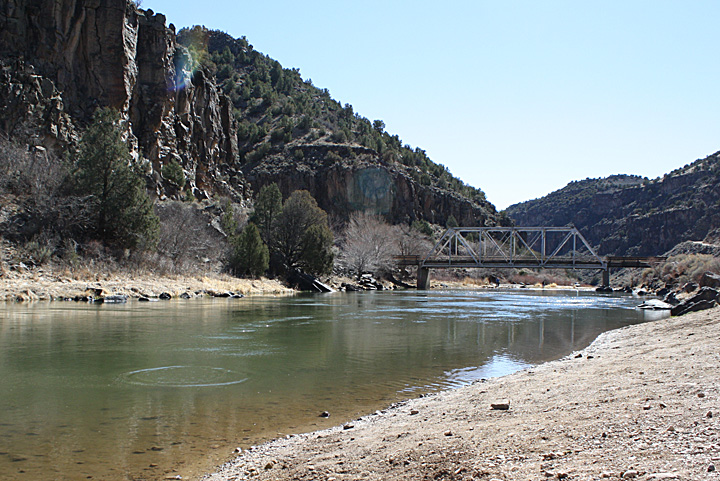