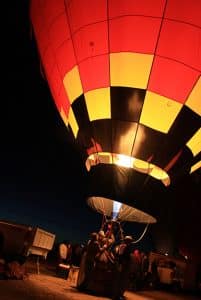 I once heard the unmistakable sound of hot air balloon burner right above my house, so I dashed outside, looking up and all around – but there was no sign of a balloon anywhere. I returned to the house, confused. I heard it again, so I rushed outside once more. Still no balloon. It took me a few trips to realize that the sound was not a balloon, but rather my refrigerator motor. Now, there might be some people who would look outside once, maybe twice, or maybe not at all. Not me. I guess I’m a bit of a balloon nut – a balloonatic, if you will. I have been waiting for one to fly over my house since I bought it three years ago. Now, I did not buy my house solely because I want balloons to fly over, but I’d be lying if I said it wasn’t a factor.

The last weekend of every October, hot air balloons pop into the skies for the Taos Mountain Balloon Rally, a tradition for 34 years now. It’s three days of balloons in the sky, tethered rides for kids, a balloon glow (Balloomenschein), and even a downtown parade complete with Halloween costumes. It seems to me that hot air balloons have an almost universal appeal – there’s a little something for everyone: a joyous splash of color in the sky, the thrill of flight with unparalleled views, and FIRE, lots of fire. And while our rally may be smaller than the big Albuquerque one, ours is more intimate; folks can go right up to the balloons and chat with pilots and meet and talk with ones they’ve met or flown with before. 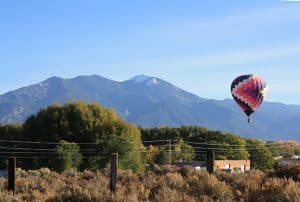 Mel vs. The Balloon

There are many ways to be involved in the rally, besides being a spectator. Businesses who sponsor balloons have the opportunity to fly, as do volunteers. And if flying isn’t your thing, then there are other fun ways to be involved – including being a part of the chase crew. I had the chance to do this one year and we ended up careening around back roads in a Range Rover, twisting and turning back and forth, staying close the balloon, communicating via walkie-talkies – SUPER FUN. And I daresay, most of the pilots are from out of town and can use a knowledgeable Taoseño to guide them on our roads.

As I established earlier, I’m rather fond of hot air balloons. If they’re in the sky, I’m outside. I was surprised when I flew that there weren’t more people outside looking up. I decided to start a tradition this year: a balloon rally viewing party. I invited a group of folks and set the start time at 7:00 (in hindsight, a bit early). We made eggs and mimosas, and even lit a fire in the front yard (unnecessary considering this year’s warm temps). I envisioned how much fun it would be for the balloons to fly over and witness a whole party going on below, everyone waving hello, etc. We sat on the porch and watched the launch, but what happened instead was that the balloons stayed on the opposite end of town, flying towards the south, and nowhere near my house. Nonetheless, we had a marvelous time! How fun would it be, though, if more people followed suit – we could establish a Taos tradition of balloon rally parties to help garner excitement and maybe even more participation in the rally itself. 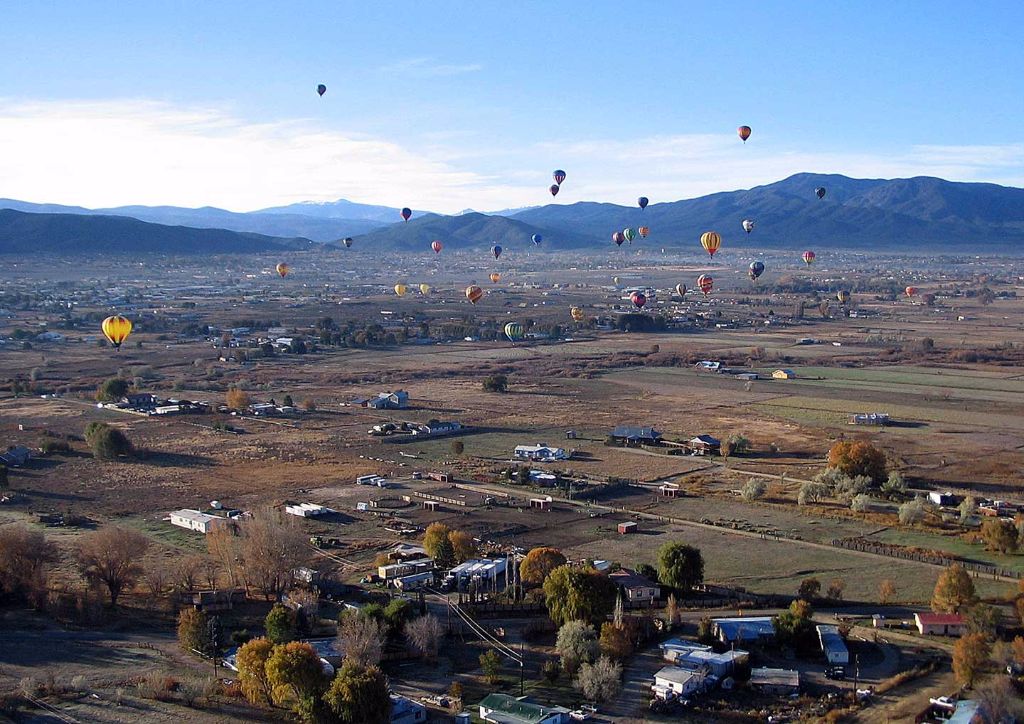 You may or may not know that the rally has struggled in the past. Lack of volunteers and waning sponsorship at times has threatened its very existence. And it would be a big loss for Taos. We don’t want a scenario where we don’t realize what we have until it’s gone. I will admit that despite my love for balloons, I have been remiss in my own participation. Consider this essay my public vow to volunteer for next year’s event and my official plea that you do the same. Taos has a history of stepping up and being involved in the things that make us special, so let’s do this.