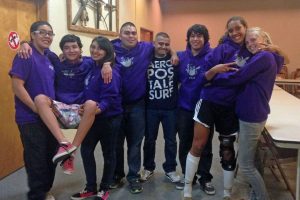 If words like baryogensis, leptons, higgs and quarks are foreign to you, then maybe you need a lesson from these high school students. They are so interested in science that they started a science cafe. They organize scientists to share lectures with their peers throughout the year over dinner where they are stoked to talk about crucial imbalance between matter and antimatter in the Universe. Dr. Vincenzo Cirigliano, a physicist at Los Alamos National Laboratory, who spoke this week at the Taos Teen Café Scientifique, reminded high school students that the most important driver for a scientist is curiosity. He said “curiosity drives scientists.” Students participating in Café Scientifique certainly have that. Dr. Cirigiliano spoke on matter and anti-matter, a topic that kept nearly 50 students thinking for a couple hours on Tuesday evening.

David Bejarano, a senior at Taos High School, is part of the group’s Youth Leadership Team. He and his team organize all the scientist lectures throughout the school year. They host them at the First Presbyterian Church, where they serve dinner and listen to the lecture. There are fifteen youth leaders who have organized themselves into committees to make sure they have things covered: one committee oversees the food, another the money and another the media.

David says that he promoted the idea of a team within the youth leaders so that the group would allocate responsibilities, and he “thinks it’s a fantastic experience!” He says that is it open to students any grade, and they are trying to get some middle school students to participate. Attendance at the lectures is usually around 50 students.

One of his fellow committee members, Leonor Morrow, pointed out that she is not even that interested in chemistry, she wants to be an anthropologist, but Café Scientifique is very worthwhile. Her teacher encouraged her to participate and she’s now involved in all the media outreach for the programs. She says it applies to her interests and she gets a lot out of it.

Kaila Dickey, a 9-12th grade teacher at Vista Grande, has three students on the Youth Leadership Team. “As a person who is passionate about science and taking a leadership role,” Kaila says “I think Café Scientique is excellent. It shows students practical applications of science.” Dr. Cirigliano certainly agreed. He talked about his curiosity with the laws of physics when he was a teenager, and how he turned that curiosity into a life’s work on particles and anti-particles. When he watched Carl Sagan’s “Cosmos” as a teenager, he realized that science was cool, and he wanted it to be part of his life.

Now, the Youth Leadership Team, with the support of their teachers and scientists like Dr. Cirigliano, is spreading the word that science is cool. Dr. Cirigliano kept reminding the students that they could be the ones to answer the questions that he and his colleagues struggle with today. And that is an exciting prospect to students like David Bejarano who is really interested in how it feels to explore new scientific territory.