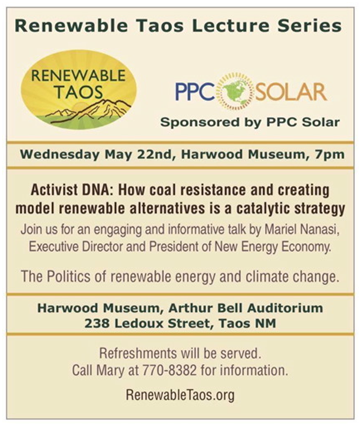 Renewable Taos (RT) hosted an event May 22nd, 2013, with Mariel Nanasi of New Energy Economy, titled “Activist DNA.” The evening opened with Mary Emery describing the recent activities of RT, which is represented by the Western Environmental Law Center as an intervenor and protestor at the Public Regulation Commission (PRC). During the last decade or so, Tri-State has raised rates nine times. Emery acknowledged the applause for RT intervention and reiterated RTs attempts to raise the 5% cap on renewable energy generation, to more applause. She also described Renewable Taos’ recent interactions and tours with PRC commissioners to local solar arrays.

Dan Weinman of PPC Solar, who sponsored the evening, described his experiences as a second-generation solar installer. His origins date back to the Carter Administration. He described the past, when folks who were off the grid needed solar to power their homes; to the present, when folks on the grid want to save on utility bills. PPC Solar is the oldest operating solar power company in New Mexico, and possibly the second-oldest solar company in the nation. Weinman described the perfect conditions for solar in our region; high elevations, cool temperatures and great sunshine. He was pleased along with his wife, Larissa to sponsor the evening.

Next up was Bill Brown of Sage West Consultants, who introduced Mariel Nanasi and described their work among different organizations. He shared a similar feeling around the urgency of climate change — how it has shifted over the years, as have the impacts on our world. Nonetheless they have the same focus on tangible solutions, getting media headlines, and attaining a clean energy economy, an effort that has taken decades but is restrained via unwarranted policies that favor fossil fuel industry. He described economic shifts and power shifts that no longer make economic sense. The transformation has been restrained by policy that is antiquated and subsidizes industries via corporate lobbyists. Brown notes we need to change quickly, and change rests at the hearts of everyone in the room… “This is not only a story for scientists and politics, but for artists, writers, and people of all beliefs.” Brown stated that it’s our responsibility to change, for ourselves and for those to come.

Executive Director of Santa Fe-based New Energy Economy (NEE), Nanasi is a tried civil rights and criminal defense attorney, licensed to practice in federal and state courts, who has been featured in the New York Times and The Santa Fe New Mexican. She was also featured in a PBS documentary called “End of the Nightstick.”

She lectures often on subjects like coal and can be viewed at www.climatestorytellers.org, a site founded by photographer, writer, and activist, Subhankar Banerjee. Mariel’s an “on-the-ground organizer” who interfaces with groups like funders, legislators, and acequia associations, using grassroots tactics like direct action or dinners at local restaurants to apprise the public of environmental justice. She is also a member of the board of directors at the Santa Fe Art Institute.

Nanasi presented a power point presentation including photos of the previously-mentioned groups engaged in activism or ribbon cutting for solar additions on top of a Navajo Chapter House or a Santa Fe County Fire station. She described meeting Dr. John Fogarty of NEE, who was a doctor on the Navajo Nation and witnessed first hand the health effects of coal energy generation. Fogarty can be seen here talking against a once proposed coal plant that surrounded the Dooda Desert Rock movement:

The title of her talk, “Activist DNA” is based on a Naomi Klein interview concerning the Occupy Wall St. movement. Nanasi described two strands: one, resistance to whom or what is the problem; the second, what do you create as far as what is possible to fix it?

In Santa Fe she works against PNM, who the largest electrical monopoly in the state, and their San Juan Coal plant in San Juan County. Coal is PNM’s main source of electricity, which creates 12 million tons of pollution a year, drastically altering the chemistry of the air. Lung diseases and cancers are part of externalized public health care costs, in the area of 240 million dollars over the last 5 years. Nanasi stated 8 billion gallons of clean water goes toward evaporation fountains that pump 6 billion tons of coal ash into the air each year.

Even “in this state of mega drought” water sources are being used to pollute the air and it is the people on the Navajo Nation who suffer the consequences that are “out of sight and out of mind.”

Crownpoint, NM lies in the toxic shadow that generates of 10 gigawatts of power, and photos of a young boy who was born with lung disease and who requires a breathing apparatus illustrate the compassion in Nanasi’s work. He cannot breathe well enough to play like most kids and was featured on a billboard sponsored by NEE in Albuquerque. She went on to describe artistic renditions in public manifestations, all dedicated to making as much noise as possible about the negative effects of coal generated electric power.

According to Mariel, this is “unconscionable in the Saudi Arabia of solar power.” She has litigated with the PRC stating that PNM has no right to raise rates because their business practice is risky to say the least, noting eventually regulation of coal ash, mercury, and water will take place, essentially throwing out future “cheap coal” campaigns and arguments. Although she lost the rate increase case, public language stating for the first time that coal plants could be shut down, and suggesting that coal may not be good for New Mexico, was a small victory.

Organizing is hard work, but rewarding and pleasurable. She noted 10% of youth are permanently distressed, and believes activism can combat depression and build community. She showed photos of young people who worked on getting 33 organizations to ask the PRC to set the Clean Energy Standard that ask utilities to reduce carbon emissions by 3% a year. She admits it’s not a panacea solution, but the group included the League of Women Voters, Economic Development Corporation in Wagon Mound, American Lung Association, and Renewable Taos to name a few. Although it seems like a small amount, that adds up to a reduction of 60% in 20 years.

PNM is the largest polluter in the state, and that includes all their customers. While working on the Navajo Nation, anti coal activists would ask Nanasi, “Why there is no solar here?” So she raised money to put solar on the Chapter House in Crownpoint that supplies 100% of electrical needs. She has done things that make others uncomfortable, and are perhaps perceived as overstepping her boundaries, yet they can result in the most positive outcomes and justify the work of an activist. These successes matter because there are education and community awareness components along with being important examples of steps in the right direction.

She juxtaposed in her talk images from a post-wildfire excursion to the Cochiti Canyon after the Los Conchas wildfire of 2011. The fire caused 300 foot flames and burned so hot (a rate of 1 acre per second), forming a pyrocumulonimbus cloud which pushed air down, like putting a lid on boiling water, cascading down the canyon, making the air hotter than 2000 degrees. It was so hot trees didn’t burn but were actually baked in place. This is a phenomenon that is almost never seen. Another occurrence never seen here before was hydrophobic soil, caused by such intense heat — the first foot and a half of soil became glasslike, resulting in horrible floods. All the microorganisms in the soil are gone, and there will not be a forest there for 200 years. Nanasi described places where literally nothing lives, reminding her of Cormac McCarthy’s post-apocalyptic book The Road.

Nanasi went on to describe putting solar panels on the largest fire station in the City of Santa Fe, a city which produces 20% of their building energy with solar. Actions like these motivated Santa Fe Commissioners Robert Anaya and Danny Mayfield to act, putting more solar on county buildings and places like schools in the Pueblo of Tesuque and the Tesuque Fire Department. All in all, Nanasi’s message is “Sol Not Coal!”

She wants to reverse the impacts on the Navajo Nation that are now described as an “energy sacrifice zone.” Throughout all these projects she has attracted more county commissioners and municipal managers who want to use money saved on energy bills towards items like new equipment for fire fighters. She has also had success in passing a resolution for Santa Fe County. For more information please visit www.newenergyeconomy.org.

On June 6th, members of Renewable Taos met with Matt Foster of the Taos Pueblo Housing Authority. They presented the same resolution they presented members of the County Commission and Town Council. Foster was explicit in stating his statements could not be considered as representative of the Tribal Council.

It was also mentioned that a resolution could be included in applying for renewable funding for Taos Pueblo. Housing at the Pueblo (and Matt’s job) is all about making people’s housing affordable and getting members the funding they need for improvements, saving money on bills, maintaining structures, and developing subdivisions, etc.

He said he would review the resolution, perhaps make it some changes, and present it to the Tribal Council for consideration. (In case you’re wondering he said about the Town of Taos, don’t ask.) Foster mentioned Red Willow Educational Center is the Pueblo’s model of sustainability, and folks there like Shawn Duran, the Tribal Administrator and the first woman administrator, are hip to renewable energy. Here’s her talking about the subject in 2009:

With all that, RT continues to strategize with local resolutions passing at all entities in Taos County, drafting a plausible ordinance via the Community Environmental Legal Defense Fund, or state legislation via Representative Bobby Gonzales (laws allowing local renewable retail wheeling and net metering) and even petitioning the community.

RT recently tabled at the KCEC annual meeting and are already planning for next year’s annual meeting — to get a quorum and make some waves at the Coop (make it function like a real coop, as per the musings of people like historian and University of Maryland Professor of Political Economy Gar Alperovitz). They are contemplating all avenues, and coordinating with UNM Taos on future lectures. They are a smart, progressive group with plenty of energy, and will soon be meeting with members of the Public Regulation Commission like Patrick Lyons and former commissioner and Attorney General candidate Jason Marks.

As mentioned, RT is intervening in Tri-State’s appeal of a rate increase via the Western Environmental Law Center, and have already received interrogatories from lawyers. Megan Anderson represents RT, and it is interesting to note that other intervenors like the Cooperative Consumer Coalition, which includes Exxon Mobile Corp and Enterprise Products Operating, consume lots of energy from Tri-State.

RT is also investigating the ramifications behind putting solar panels on county and city buildings, including analyzing energy usage. Furthermore, they are getting together with people like John Covert, of Colorado Working Landscapes, which organizes in the San Luis Valley. For more information, visit www.renewabletaos.org.

This piece originally appeared on TaosFriction.