The Blue Sky Solar Array is owned and operated by Kenyon Energy and sells energy fto KCEC via a Purchase Power Agreement (PPA). PPC Solar maintains and built the site. 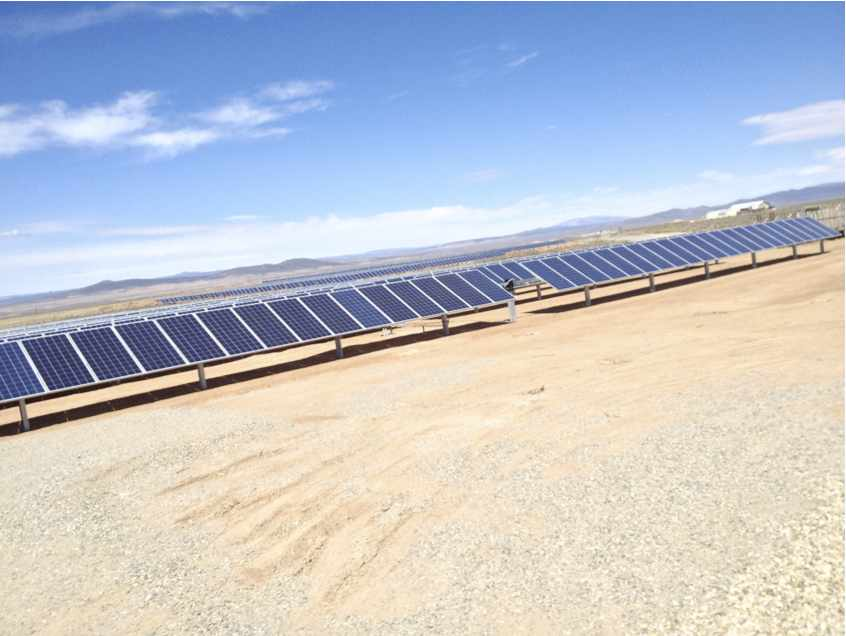 The CEO of PPC Energy, Dan Weinman, believes this array should be eliminated from the  renewable power cap of 5% agreed to by KCEC and its Generation & Transmission (GT) provider Tri-State because Blue Sky is privately owned. But according to KCEC and Tri-State, the Blue Sky, Chevron, and Amalia arrays count against the Tri-State cap for renewables, though none of the newest arrays are owned or operated by KCEC. In a recent interview with Luis Reyes, CEO of KCEC, he disagreed and felt since KCEC uses the power, the point becomes moot.

The Blue Sky site took seven weeks to build. Weinman says he has worked with LANL consultants on the project. Apparently, the technicians have determined that if the 12 megawatt range of distributed generation is attained (the amount of local energy consumed), back up power in the form of natural gas or localized energy storage would be required. Again, Blue Sky generates 1.5 megawatts.

Right now, local solar provides roughly 6 megawatts — 4.5%, according to Reyes, of the electricity demand for the KCEC service area. Four more projects like Blue Sky are plausible according to Weinman. Large commercial voltage arrays like Blue Sky work on a single-axis tracking system, wherein solar panels facing east in the morning track the sun by rotating on a north-south axis throughout the day. The system provides 25% more energy than a fixed tilt array where panels face south.  The array is set on 22 acres in an industrial area, north of the state highway and barely visible from the highway 64 corridor, which mitigates the NIMBY (Not In My Back Yard) effect.

Pushing power back from coal-fired plants in northwestern New Mexico affects the Navajo Nation and San Juan County (SJC is in the top 10 worst emissions for counties in the US), which could turn into a positive talking point for approaching local Pueblos who could generate power themselves for the community.

According to Weinman, Taos could theoretically produce 100% of local needs and export power, via the substation on the southern end of Blueberry Hill or the Tres Amigos substation currently in construction. 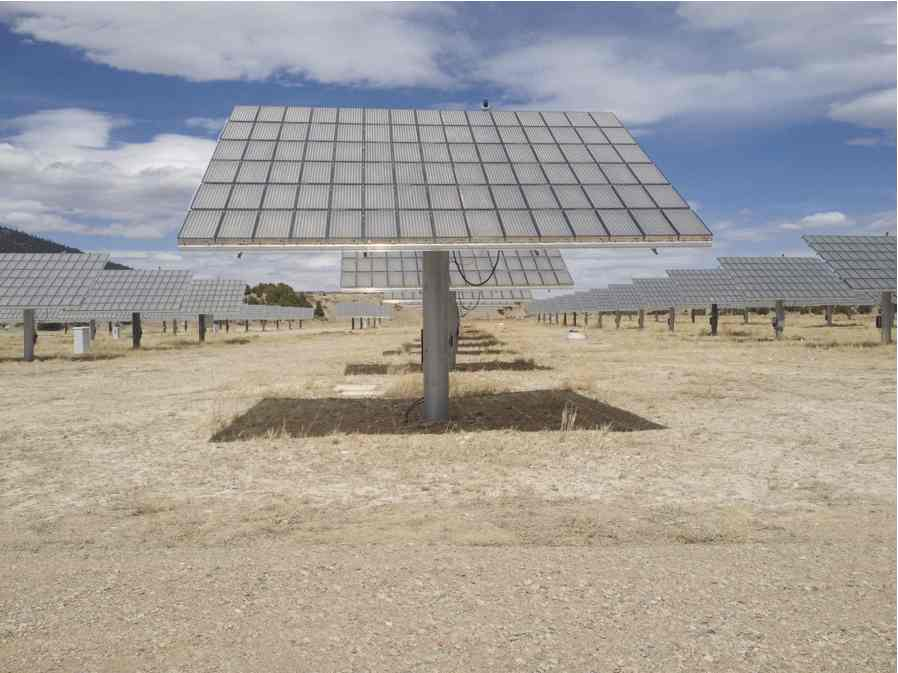 After visiting the Blue Sky array, the group visited the concentrating solar photovoltaic array at the Chevron site just south of Questa. First, Chevron administrators reviewed safety procedures at the Questa Mine site, which included the assignment of hard hats, safety goggles and a checklist to be filled out. Indeed, Chevron officials said that a drug test could be administered if safety administrators suspected inebriation. The array, some miles from the mine near Questa, is made up of large panels covered with special lenses that concentrate solar radiation on the solar cells beneath (heliostats).

The heliostats are separated from each other, and some were malfunctioning (not aimed at the sun). The CPV array is a demonstration project designed to test the feasibility of using concentrating lenses and heliostats. The particular site is somewhat dreary, built on a poisonous tailings site, and produces 1 megawatt of power, which Chevron sells to KCEC. Unlike the Blue Sky system, which operates on a single tracking system, the Chevron system does not, making for higher chances of failure.

Estimates suggest the Chevron Array cost roughly twice as much as the Blue Sky array. Where the Blue Sky array requires maintenance once every month, the Chevron site requires a 20 hour/week site manager. Some of the Chevron array’s inverters were down. Given the sheer amount of wind in the valley, one might ask, why not build a turbine farm? Critics of the Chevron array say the place is simply a green public relations attempt to divert attention from the tailing site and the management of waste and pollution at the environmental site.

At a recent RT meeting, KCEC trustee David Torres reported that on a visit with the Executive Vice President of Tri-State he was told the 5% renewable cap could be adjusted upwards by the Member Relations Committee. Remember that letter to the Rural Utility Service written by delegation members Sen. Udall, Sen. Heinrich, and Rep. Lujan asking for clarification regarding the 5% cap (Policy 115)? Well, Renewable Taos got the answer already, and it has nothing to do with RUS, but Tri-State itself. BUT, in a recent interview with Reyes of KCEC, he stated that in fact the “Contracts Committee” makes a decision on bumping up past 5%.

Torres discussed the coop culture, and how some Tri-State board members have served for 20 to 40 years. Torres said Tri-State’s Ken Anderson said the “legal department has been instructed to vigorously defend the coop model of governance.” Accordingly, Anderson says Tri-State is not accountable to any government regulations and legal departments are ready to argue the case. Torres also mentioned that Tri-State executives groom the board members by giving out perks like Denver Broncos tickets for fundraising, or trips to conferences in San Francisco or Washington D.C. The coop culture responds to manipulation. Torres, who has been appointed to the KCEC board of trustees, is running for re-election.

Torres noted that some Tri-State board members abstain from voting in order to protect themselves from adverse effects re: their fiduciary responsibilities to Tri-State, which creates a conflict of interest given their representation of a local coop like KCEC. Similarly and locally, the majority on the KCEC board has marginalized trustee Peter Adang.

RT has agreed to support for Torres in the upcoming election, May 14th (Questa May 9th). Two seats in Taos are up for election, including Torres and incumbent Manuel Medina (about 24 years). Term limits have been reset, according to Torres.

According to Torres, Policy 115 (5% renewable cap) can be discussed by the Member Relations Committee in January of 2014. Who is on that committee remains to be seen, and this information still conflicts with Reyes stating the Contracts Committee’s take this on. At the April 8th RT meeting, Torres reported that Tri-State is emphatic about not letting states regulate their activities.

Oh, and remember that rate increase the PRC recently denied? Tri-State has already appealed it, and it’s going to go before the PRC again. In Colorado, legislation is still on the table to force Tri-State to provide 25% renewable energy to the state. The Colorado legislation passed their Senate, and is expected to pass the House and be signed into law by the Governor.

According to an email sent by Bresnahan, “We made a 45 minute presentation to the County Commission, which was followed by a long discussion. The upshot is that we will probably seek a grant to do a County plan for renewable energy. We also gave them our joint resolution on renewable energy, a fairly ambitious resolution that we hope to get passed with the County and Town. What a day! We’re all exhausted.”

County Commissioner Gabriel Romero suggested Renewable Taos should head a Renewable Energy Policy Planning Group, to create a development plan that would include developing the local economy. RT is also attempting to get joint resolutions among county municipalities like Questa and Taos Pueblo.

Others in the group are considering the recent ban on fracking by the Mora County Commission, and a community bill of rights that effectively nullify legal tactics used by corporations to get whatever they want. Those people are poised to work with the Community Environmental Legal Defense Fund, who drafted the ordinance passed in Mora County that received much press earlier this week — they are the first county in the United States to ban fracking outright.

Renewable Taos should be exhausted, as this weekend they attended the Solar Fiesta at Santa Fe Community College. They are coordinating with statewide renewable groups to concert their efforts, such as New Energy Economy and the Sierra Club. In addition, they were present at the Home Expo in Taos AND attended the BLM meeting last week concerning new transmission lines that are slated to run through the recently-proclaimed Rio Grande del Norte National Monument. It remains to be seen where they sit on this soon-to-be-contested issue, but according to RT the BLM manager is not in favor of allowing those lines to pass through the monument. 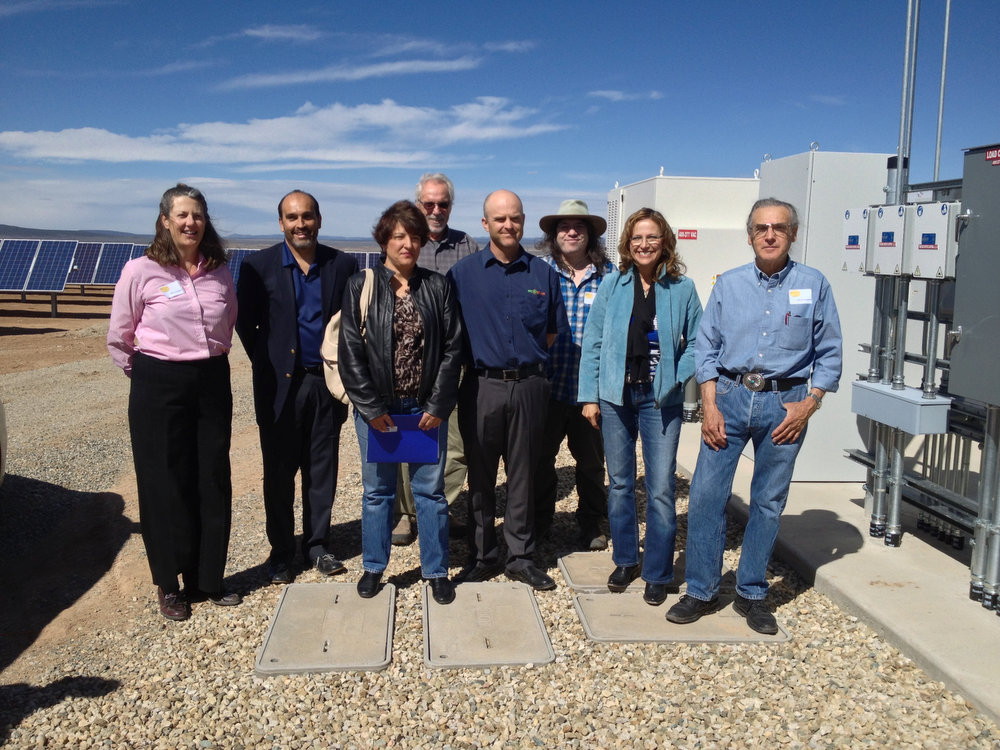 To keep up with Renewable Taos, visit their website (www.renewabletaos.org) or attend one of their meetings on Mondays at 1:30pm at the Valverde Commons.